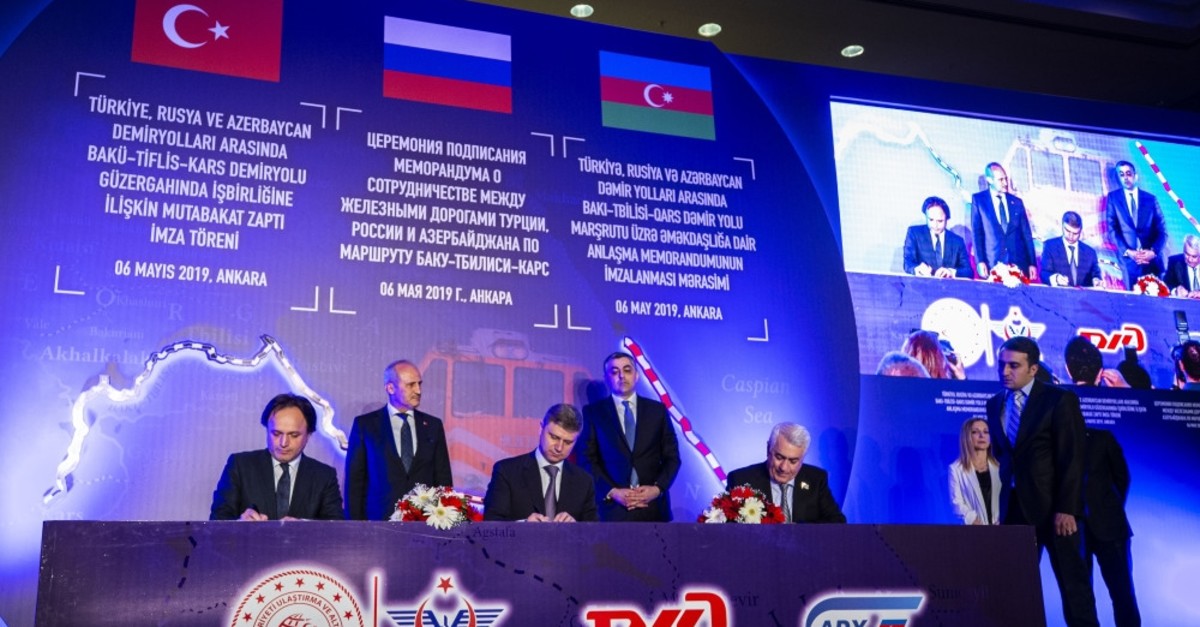 Turkish, Russian and Azerbaijani railway authorities signed a cooperation deal to boost the economic activity on Baku-Tbilisi-Kars(BTK) railway line, May 6, 2019.
by Daily Sabah with AA May 08, 2019 12:12 am

The cooperation deal between Turkey, Azerbaijan and Russia aims to generate greater economic advantage from the Baku-Tbilisi-Kars railway line as these nations target a bigger share from global trade

Turkey, Azerbaijan and Russia inked a cooperation agreement on late Monday to increase the volume of freight carried on the Baku-Tbilisi-Kars (BTK) railway line, boosting commercial operations. The memorandum of understanding (MoU) signed between the railway institutions of Turkey, Russia and Azerbaijan on cooperation on the Baku-Tbilisi-Kars railway route was signed by Turkish State Railways (TCDD) General Manager Ali İhsan Uygun, Russian Railways Inc. General Manager and Chairman Oleg Belozerov and Azeri Railways Inc. Chairman Cavid Gurbanov in Ankara. Transport and Infrastructure Minister Cahit Turhan, in his speech at the ceremony, suggested that the MoU would further strengthen and develop the existing cooperation in the railway sector.

"With this memorandum of understanding to be inked, I believe that the volume of shipments over the Baku-Tbilisi-Kars route will increase and that the railway line will accelerate in commercial terms," Transport and Infrastructure Minister Turhan added.

He stressed that the significance of the BTK is increasing day by day in the neighboring countries and regional countries with a share in the Asian-European trade. "With the activation of the BTK line, the products manufactured by our small and medium-sized industrialists will be able to reach Russia and Central Asia more quickly, safely and economically," Turhan said, further stressing that they were in an effort to make the required investments as the Turkish side. This project connects not only three countries, but also the U.K., France, Belgium, Germany, Austria, Hungary, Serbia, Bulgaria, Turkey, Georgia, Azerbaijan, Kazakhstan, Turkmenistan and China. The 829-kilometer railway line, extending from Baku to Kars, complements a major part of the middle corridor with the Caspian Pass line.

Minister Turhan said the BTK line connects Southeast Asian countries starting from China, as well as the Central Asian countries such as Kazakhstan, Turkmenistan, Uzbekistan, Azerbaijan, and neighboring and friendly countries such as Georgia and Russian to Europe, the Middle East and Africa via Turkey, underlining that this line would also contribute directly to the economy of the countries on the new Silk Road, as it was in the old Silk Road, and that it served as one of the main parts of the uninterrupted transport network between Asia and Europe.

Turhan said the fact that China, located at one end of the historical Silk Road, realized the projects to develop the transportation network one after the other also mobilized the countries of the region, pointing to an economic activity area where everyone could benefit only through cooperation.

The minister highlighted that the railway sectors are required to provide the necessary cooperation and coordination to get a larger share from global trade. "This necessity, which contains a highly meaningful strategy, is more vital with major projects realized in Turkey, such as the Marmaray, Yavuz Sultan Selim Bridge, Northern Marmara Highway and Eurasia Tunnel," he continued.

"In addition to creating transit traffic in the east-west axis with our major projects, huge savings will be made and costs will go down. These mega-scale projects will provide significant support to the socio-economic welfare of the countries in the region and to the economic growth and development models," he said.

TCDD General Manager Ali İhsan Uygun announced that the agreement signed by Turkey, Russia and Azerbaijan on cooperation on the Baku-Tbilisi-Kars railway route is aimed at ensuring regular rail transport on this line, determining economically-justified tariffs and bringing new loads into the line.

Stating that the construction of Ankara-İzmir and Ankara-Sivas high-speed railway lines is underway, Uygun noted that the planned Sivas-Erzincan, Erzincan-Erzurum-Kars and Halkalı-Kapıkule high-speed railway projects will be integrated into the Baku-Tbilisi-Kars railway line, helping contribute to economies and social life in Turkey, Georgia, Azerbaijan, Russia and Central Asian countries.

According to Uygun, once these projects are completed; thanks to the high-speed and speed railway to span from Kars to Edirne, Turkey will become an important railway corridor for transports in Europe, Middle East, Central Asia, Russia and China.

Indicating that trade volume with Azerbaijan, Turkey's sister country, and Russia, Turkey's friendly nation, has been on the rise in recent years, Uygun said that over 20 million tons of load are carried between Turkey and Russia currently and that there is great potential for further rise.

According to Uygun, the railway administrations of the three friendly nations aim to render the Baku-Tbilisi-Kars railway line more active and carry out up to 6 million tons of load via Russia.

Pointing out that one of the positive contributions of this line is to ensure faster, safer and lower-cost access for the products produced by Turkish small and medium-sized enterprises (SMEs) in entering Russian and Central Asian markets, Uygun said, "In accordance with these objectives, parties will evaluate the possibility of making the 76-kilometer section of the Ahılkelek-Kars line in Turkish borders suitable for 1,520 kilometer rail distance and the possibility of implementing the terminal and logistics center construction project in Kars."

New opportunities will emerge in logistics

Russian Railways Inc. General Manager and Chairman Belozerov remarked that the MoU will give the green light to the development of transport on the Baku-Tbilisi-Kars railway line, one section of which is being constructed by Azerbaijan, which means that Turkey will be connected to the united railway technological area of Finland, Bulgaria and Iran, as well as the former Union of Soviet Socialist Republics (USSR).

Belozerov emphasized that 6 million tons of load are currently carried between Turkey and Russia via direct lines and 20 million others are carried by various transport means, including railway lines, adding, "The development of the Baku-Tbilisi-Kars corridor will provide the preconditions for the organization of a regular container line and the inclusion of Turkey in the Eurasian transport corridor system. New loads will be transported on this line and new possibilities for the development of international logistics will occur."