Ankara, Kazan aim for over $1B in bilateral trade volume 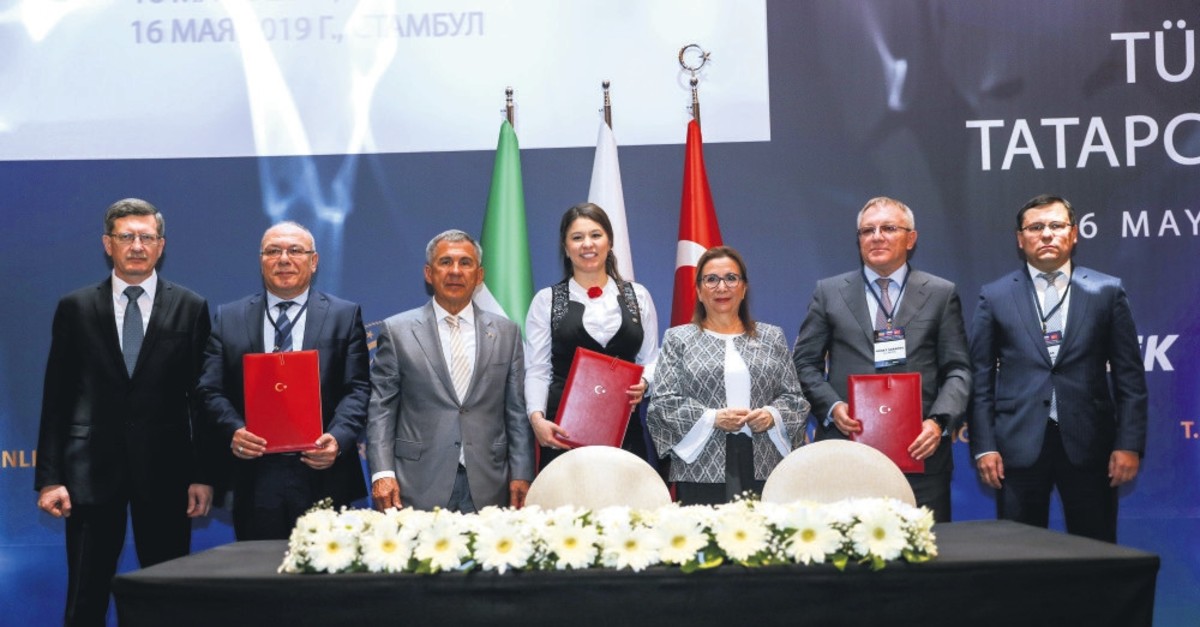 Trade Minister Ruhsar Pekcan, third from right, and Tatarstan President Rustam Minnikhanov, third from left, participated in the Turkey-Tatarstan Business Forum organized by Foreign Economic Relations Board, Istanbul, May 16, 2019.
by Daily Sabah May 17, 2019 12:06 am

With a target of increasing the bilateral trade volume and mutual investments, Turkey and Tatarstan held a business forum organized by the Foreign Economic Relations Board (DEİK) yesterday with ministers and businesspeople in attendance.

In her address at the forum, Trade Minister Ruhsar Pekcan stressed that Turkish and Tatari authorities are working to boost the bilateral trade volume between the two countries over $1 billion.

"We believe that we can reach over $1 billion in trade volume in a short period of time," she said.

Minister Pekcan highlighted that Turkish contractors rank second in the world in terms of project value and they have invested $1.7 billion in Tatarstan and stressed that Turkey wants to see more businesspeople from the country take part in large-scale projects in Tatarstan.

The trade minister also drew attention to Turkey's increasing efforts to widespread the halal compliance. "Around 20 million Muslims live in the Russian Federation and they need to have a system to meet their halal food requirement. We can make mutual investments in this area with Tatarstan in cooperation with Turkey's Halal Accreditation Agency," she noted.

Rustam Minnikhanov, the president of the Tatarstan Autonomous Republic, also stressed that they will cooperate with Turkey in the production of halal productions, pointing out the needs of the huge Muslim population in the Russian Federation.

Minnikhanov noted that flights between Kazan and Istanbul are held six days a week and in a short period of time, the flights will be seven days a week. "Turkey is one of the most important partners of Tatarstan and we aim to reach higher trade volumes. Turkish businesspeople have so far invested more than $2 billion in our country," the Tatari president said.

Minnikhanov mentioned the Tatari government's plan to establish an international industrial zone and noted that they can benefit from Turkey's know-how in this area. The president also stressed that they are ready to cooperate with Turkey in energy, petrochemicals, automotive, information technology, construction, tourism and agriculture.

DEİK Turkey-Russia Business Council Chairman Tuncay Özilhan stated the strong investment and economic potential of Tatarstan and noted that the country harbors a number of investment areas in Kazan's Alabuga Special Economic and Petrochemical Zone. Özilhan highlighted that the Tatarstan Business Committee formed under Turkey-Russia Business Council continues efforts to boost bilateral economic and commercial relations. Following the addresses, Minnihanov and Pekcan oversaw the ceremony for signing a number of agreements in food, agriculture and innovation.