THY to launch flights to China's Xi'an, home of Terracotta Army 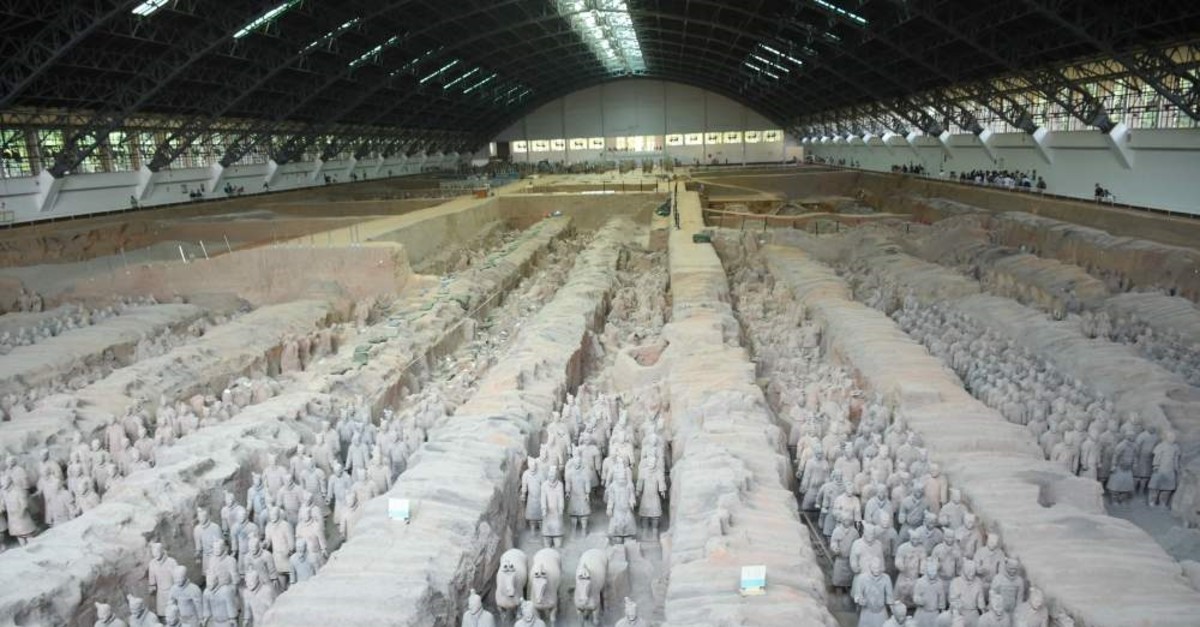 Seeking further growth in the Chinese market, Turkish Airlines is introducing flights to eight other cities in the country, including Xi'an, famous for being home to the mysterious underground Terracotta Army

National flag carrier Turkish Airlines (THY), poised to grow even more with the opening of Istanbul Airport, will launch flights to new destinations thanks to new wide-body aircraft set to join its fleet soon. One of the most attention-grabbing of these destinations is the Chinese city of Xi'an, which is home to a mysterious underground army with more than 8,000 clay soldiers and a history of 2,000 years. While a great number of people from around the world are traveling to Xi'an, the city where the historical Silk Road starts, to see the clay soldiers, THY is set to have a significant share of this market when it launches flights to the city in the upcoming period.

Within the scope of satisfying its need for wide-body aircraft, THY plans to receive a delivery of 30 A350-900 model aircraft from Airbus, with 25 being firm orders and the remaining five optional orders, and 30 Boeing 787-9 model aircraft from Boeing, with 25 firm orders and the remaining five optional, between 2019 and 2023. The first Boeing 787-9 Dreamliners, so-called dream aircraft, will join the THY fleet in June. As a result of adding new wide-body aircraft to its fleet, THY will launch flights to new destinations. According to the flight program, the first flight by Boeing 787-9 model aircraft will be carried out to Denpasar, Bali from Istanbul on July 17. The new destinations include Mexico City and Cancun in Mexico and Newark in the U.S.

Established in 1933, THY flies to more than 300 destinations in over 120 countries − 49 domestic and 257 international. Last year, it carried more than 75 million passengers with a seat occupancy rate of 82%.

In line with the market surveys that the Turkish flag carrier has conducted considering the increase in the number of its wide-body aircraft, THY has accelerated its plans to fly to new long-haul destinations. Accordingly, while THY will eye opportunities in Far Eastern cities, it will also restart flights to the Japanese city of Osaka as of April 14, 2020 in addition to Tokyo, where it currently offers flights.

THY plans to grow in China, which it expects to be visited by 1 million tourists in the upcoming period. The airline company, which currently flies to Beijing, Shanghai, Guangzhou and Hong Kong, is also conducting research and negotiations to start flights to eight other cities in the country. THY is working on introducing flights to Xi'an and Xiamen in particular.

One of the most notable destinations where THY is expected to launch flights in the future will be Xi'an, one of the oldest cities in China located 1,000 kilometers from Beijing and known as the beginning of the historic Silk Road. The city is famous for hosting the underground Terracotta Army built in 210 B.C. Tourists from around the world are flocking to the museum to see the more than 8,000 clay soldiers located in the mausoleum of first Chinese emperor Qin Shi Huang; a site named in the UNESCO World Heritage List. Considering that some 40,000 people are estimated to visit the museum daily, THY will have an important share of the growing tourism in Xi'an.

Studies have revealed that the clay soldiers, noteworthy due to their different gestures and unique facial features in the grave in Xi'an, which hosted 11 dynasties, were the spitting images of soldiers deployed in the empire's army. The heights of the statues vary between 183 centimeters and 195 centimeters. The soldiers appear ready to fight, dressed in their personal armor and sporting hair nobs. The emperor built the underground grave because he believed the soldiers would protect him after he died.

While only 65 of the 600 pits have been unearthed, it is estimated that 700,000 people worked for 37 years on the grave's construction. It has also been detected that the army was spread over an area of 98 square kilometers. Many weapons have been found in the pits such as swords, spears, axes, machetes, shields and arrowheads, as well as 40,000 bronze weapon parts. It is believed that the workers who buried the underground army were killed and buried in these tombs so that the location of the tomb would remain hidden. While Qin Shi Huang, who defeated all the principalities in China, established the Qin Dynasty and proclaimed himself the emperor, construction for his tomb started while he was still alive.

The mysterious army was discovered in 1974 in the Lintong district when local farmers were drilling wells. In addition to the ones exhibited in Topkapı Palace in recent years, the grave also includes 520 mounted troops, 130 chariots and 150 cavalry horses as well as tools and equipment, including war instruments. Many sculptures have yet to be excavated to keep their chemistry untouched until new technology to analyze them is developed. After the excavation of the Terracotta Army, the painted surface of some terracotta figures has begun to flake and disappear.

The emperor's tomb, accompanied by China's famous immortal army, is considered one of the eight wonders of the world and is located 36 meters underground. For the underground army, four main pits with a depth of nearly 7 meters were excavated, with the largest one being 230 meters long and 62 meters wide, consisting of more than 6,000 figures. The second and third pits include chariots, cavalry and infantry units and high-ranking officers.