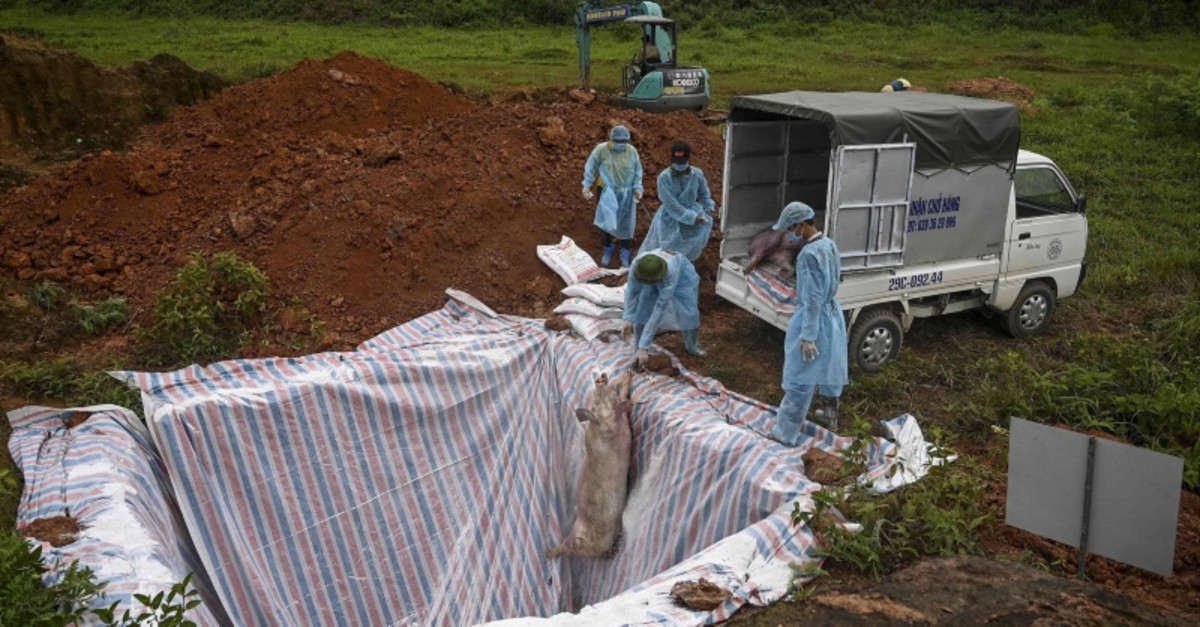 This photograph taken on May 27, 2019 shows health officials and veterinarians throwing a dead pig into an isolated quarantined pit in Hanoi to stop the spread of African Swine Fever (AFP Photo)
by Daily Sabah with AFP
Jun 06, 2019 9:29 pm

Eliminating the deadly African swine fever, which jumped from Africa to Europe, will take decades as it threatens China's $128 billion pork industry amid the government's slaughter of millions of pigs.

Outbreaks have been reported in Vietnam, Mongolia, Cambodia, Hong Kong and China -- the world's biggest pork producer and consumer.

Experts warn it could take years to contain the hog-killing virus given the differing biosecurity standards on commercial pig farms and backyard smallholdings across Asia.

Checkpoints, sniffer dogs and strict import bans have been deployed in a desperate bid to control its spread.

But the disease has already hit most provinces in China, reducing pork production by 30 percent according to some estimates.

Beijing's official statistics say around 1 million pigs have been killed since the first outbreak in August last year -- but that is widely considered to be an underestimate.

Live pig prices are up by around 40 percent year-on-year in China, and pork imports from Europe, Canada and Brazil into the country are climbing.

Beef and poultry exports are also on the rise as suppliers scramble to fill the deficit in a region where pork is the staple protein -- fried, grilled, boiled and eaten by tens of millions each day in noodle bowls and rice dishes.

Some Asian consumers have already started paying more for pork.

And America is also soon expected to feel the pinch -- likely around Christmas when people buy holiday hams.

"The price impact will be sizable," said Christine McCracken, senior animal protein analyst at Rabobank, speaking from the U.S.

She estimates that 200 million pigs could be culled in China -- more than half the swine population in the country, which supplies around 50 percent of the world's pork.

Losing that many pigs could cause global pork supplies to dip by 8 percent, McCracken said.

Nguyen Van Duoc poured his life savings into raising pigs, one of hundreds of thousands of Vietnamese smallholder farmers bearing the brunt of the virus, which is not infectious in humans but has no cure or vaccine.

His herd of 36 was culled after swine fever was detected at his backyard farm on the outskirts of Hanoi.

"Our family is devastated," said Duoc, who borrowed thousands of dollars to get started.

"We relied on income from the pigs for my kids' schooling," the 50-year-old told AFP after his animals were killed and dumped into a burial pit.

Along with China, Vietnam has been the worst hit by swine fever, but the country exports very little of its pork.

Since its first case in February, Vietnam has culled an estimated 2 million pigs -- over 6% of the total population -- and has set up screening stations along some borders.

South Korea, Japan and Taiwan have also all stepped up airport screening after ASF was brought in by travelers carrying contaminated sausages, although no pigs have been infected so far.

All three countries have bumped up fines for smuggling in pork products -- up to $8,400 in South Korea -- and Japan has deployed sniffer dogs and quarantine stations at major airports.

"We're trying to crack down on all possible routes," said an animal hygiene official at Japan's agriculture ministry, declining to be named.

North Korea, Cambodia, Hong Kong and Mongolia have all reported cases this year, along with Romania, Ukraine, Moldova and Russia.

The outbreak has sparked calls to boost biosecurity in Asia, where most pigs are raised in backyard farms and fed food scraps -- ideal virus vectors.

"It's spreading like wildfire in Asia because... the pig is the garbage truck of Asia," said Simon Quilty, an independent meat and livestock analyst based in Australia.

Experts predict it could take anywhere from two to 10 years for the virus to be fully contained in Asia, while fears are mounting of a global scourge embedding in farms with poor biosecurity standards and wild boar populations.

"When a virus becomes endemic like that, we're going to be living with this forever," Matthew Stone, deputy director-general at the World Organisation for Animal Health (OIE) told AFP in Paris.

That will hammer the pork industry and spin-off sectors such as the soybean business used for animal feed, Stone said, warning of "significant uncertainty" in global markets for years to come.

As the virus cuts through Asia, pork imports into China have soared -- shipments from the EU alone are up 20 to 30 percent, according to McCracken.

But global supplies are not enough to plug the huge gap.

That has opened unexpected opportunities elsewhere.

Global poultry production is expected to rise 3 percent this year, according to the U.S. Department of Agriculture.

But even those chicken and beef stopgaps might not be enough to feed China's pork-hungry population.

"There isn't enough global pork available to China directly, nor is there enough other protein," McCracken told AFP.

That will deepen the misery for Chinese diners already feeling a price squeeze -- as well as customers in its main exports markets like Hong Kong where the cost of imported pork has more than doubled.

At a busy Hong Kong market, butcher Woo said customers can no longer afford to buy as much pork.

"I've reduced supplies from two to one pig a day now," he said.