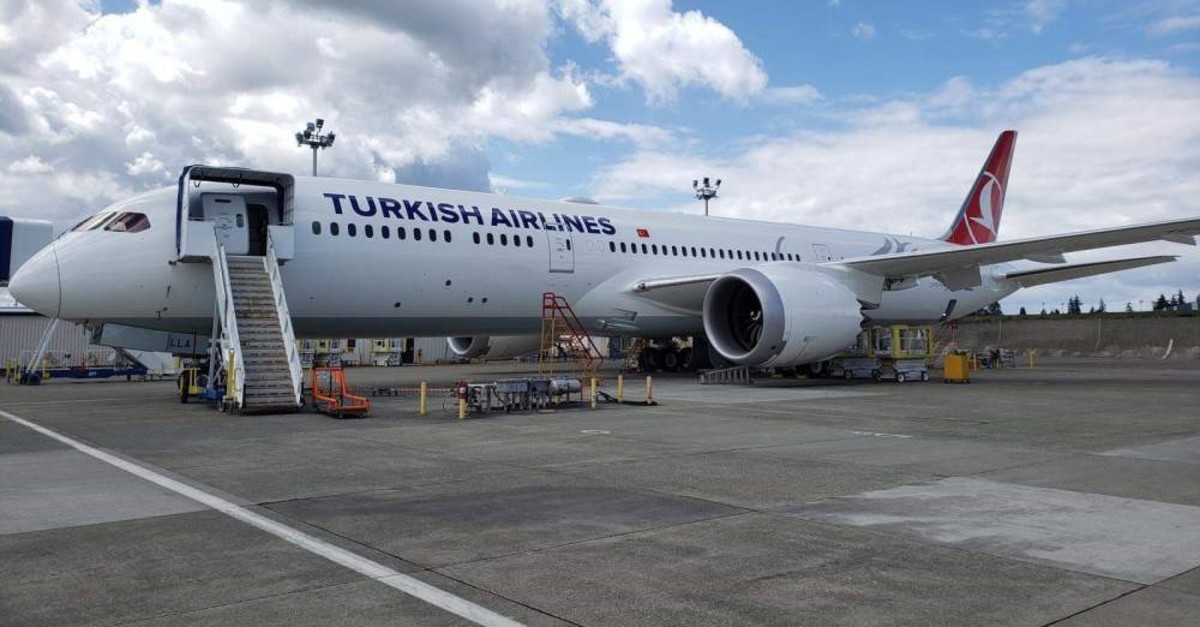 Boeing's state-of-the-art Dreamliner, which joined the Turkish Airlines (THY) fleet yesterday, stands out for its new cabin specially designed for the THY brand.
by Daily Sabah Jun 27, 2019 12:19 am

The first of 30 B787-9 Dreamliners, for which the flag carrier airline started negotiating with Boeing in September 2017 and finalized talks in March 2018 with 25 firm and five optional orders, has joined THY's fleet. Following delivery of the first of these new-generation wide-body aircraft, which form a significant part of Turkish Airlines' strategy of expanding its fleet in line with its future goals, the rest of the order will continue to arrive until 2023.

Boeing's state-of-the-art Dreamliner, which joined the Turkish Airlines (THY) fleet as of yesterday, stands out for its new cabin specially designed for the THY brand. The most important part of the aircraft is the new seat designs. Economy class seats and business class platforms of the aircraft, which has a capacity of 300 passengers with 270 economy and 30 business class seats, are designed for long-haul flights and produced in Turkey by Turkish suppliers.

The B787-9, powered by the latest technology and revolutionary design, sets a new benchmark in fuel and operating costs. In addition to a 14.140 km (7,635 miles) range and large cargo capacity, the B787-9 will offer profitable growth opportunities on THY's long-haul flights. Compared to other aircraft in its class, the B787-9 will also allow the airline to save a significant amount of fuel per seat.

Regarded as one of the most advanced aircraft in fuel efficiency and range flexibility, the B787-9 Dreamliner will also create significant added value to the flight network expansion strategy, one of the priority policies of the flag carrier airline. These aircraft, which will enable THY to set new routes with more effective planning, will reinforce the company's status as the airline flying to the most countries and international destinations in the world.

The B787-9 Dreamliner, with both cabin design and next-generation features, will offer passengers extra comfort on the longest routes of the global carrier's extensive flight network that currently reaches 311 destinations in 124 countries. The wide-body aircraft with its wider in-cabin luggage areas and extra-large windows also allow more control over the light entering the cabin with dimmable LED window systems. Coupled with light filtering, better air pressure and greater moisture generation capabilities, the Dreamliner will help passengers feel less dry, thus reducing flight fatigue. In addition, all engines, systems, and equipment are designed with a vibration isolation feature to give passengers a quieter flight experience. Designed to maximize THY's award-winning in-flight catering and entertainment system for passengers, modern cabins create the perfect environment in this sense.

The 787-9 Dreamliner, which peaks in comfort for business class passengers, is designed with a 112 cm seat spacing for each of the 30 seats and 193 cm 180-degree fully reclining seat length. Inspired by the colorful sunsets of Cappadocia, one of Turkey's major tourism centers, and the turquoise beaches of our country, the wavy lighting designs, modern 1-2-1 configuration offering all passengers aisle access, increased privacy panels, private indoor storage area for personal belongings, personal care mirror and spacious cocktail tables offer passengers maximum comfort and a privileged experience.

With 30 business class seats using the latest technology, Boeing 787-9 Dreamliner ensures an unrivaled flight experience. In addition to the adjustable privacy panel between the paired middle seats and the newly designed seat cover, which provides more personal space in the business class, the 18-inch HD video display and touch-sensitive control play an active role in the development of the in-flight entertainment portfolio offered to passengers. The suede-like Alcantara filler, which is commonly used in sports cars, is also applied in the interior coating of business class seats. All these details and more come to the fore as a touch to the concept of luxury and elegance in the new generation aircraft.

In the economy class produced by Turkish suppliers with domestic and national opportunities in Turkey, Turkish Airlines passengers will have an enjoyable flight experience with HD entertainment system, which will be 12-inch-wide in the first six aircraft and then 13-inch in the following orders, more functional magazine pocket, a 15-centimeter reclining seat, and 79 centimeter knee distance.

İlker Aycı, Chairman and CEO of Turkish Airlines, evaluated the first delivery of Boeing 787-9. "With the transition to our new home, Istanbul Airport, we have begun a brand-new era in the history of Turkish Airlines. In this process, we continue our growth strategy unabated by adding new generation aircraft to our fleet, which points to a privileged milestone, and renew our commitment to fly to more international destinations than any other airline in the world," he said. "As part of our vision for the future, we are excited to reach new horizons with the addition of 787-9 Dreamliners to our fleet. The advanced technology, fuel efficiency and passenger-centered cabin design of this aircraft will make a great contribution to maintain our place as the priority choice of our guests in air transportation and to provide the best experience in its class in the coming years."

Boeing Commercial Aircraft Sales and Marketing Senior Vice President Ihssane Mounir, on the other hand, said THY's Dreamliner fleet would play a vital role in meeting the growing demand at Istanbul Airport, the new home of the global carrier. "We are confident that Turkish Airlines, the flag carrier airline of Turkey, will benefit from 787-9's design features that maximize fuel efficiency, superior performance, and passenger satisfaction and that Dreamliner will contribute to THY's well-established reputation," he continued.

While the 787-9 Dreamliner will make its first domestic flight from Istanbul Airport to Antalya on July 8, its first international flight is scheduled to Denpasar (Bali), which will join the Turkish Airlines flight network on July 17. The B787-9 Dreamliner, which will carry passengers on medium and long-haul exotic routes during the summer of 2019, will fly to London, Dubai, Washington D.C., New York, Atlanta, Mexico City, Cancun, Bali, Amsterdam, Delhi, Panama and Bogota. Six 787-9 Dreamliners will join the fleet by the end of August, serving on various international routes as the precursor of the beginning of a new era in the growth of THY's young and modern fleet.