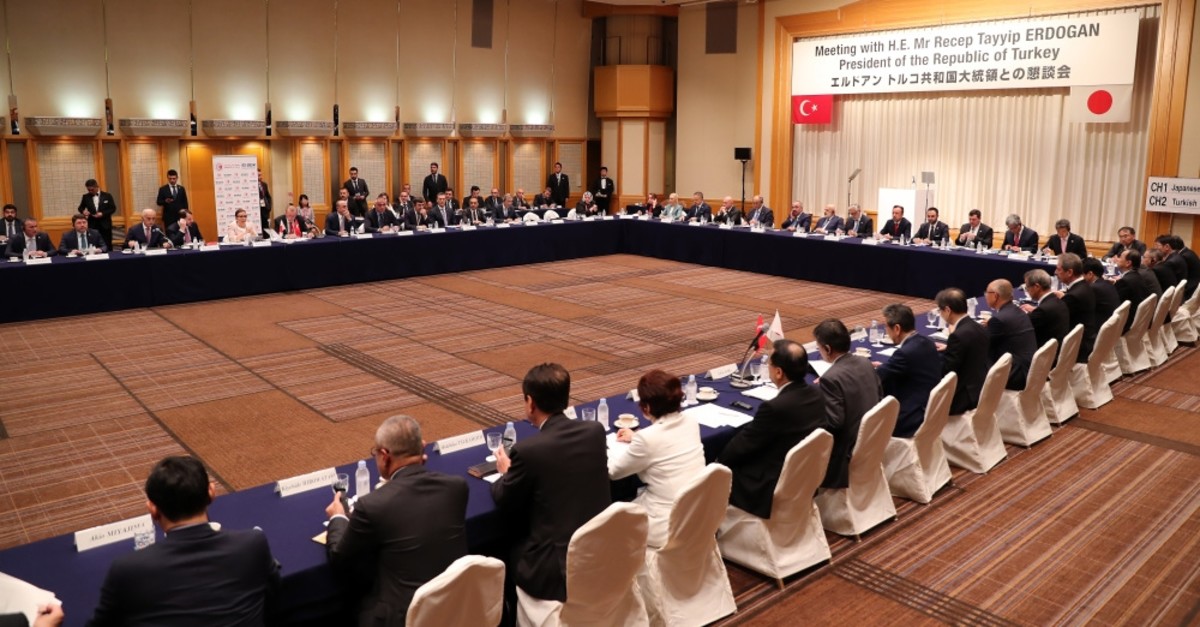 In a global environment of rising trade protectionism, Turkey has been one of the countries that has vouched for free trade, which was expressed in the latest declaration of the G20 Osaka Summit. As far as bilateral relations are concerned, Turkey also sought the implementation of free trade principles. At a meeting with Japanese businesspeople and authorities in Tokyo yesterday, President Recep Tayyip Erdoğan once again emphasized that at a time of increasing trade protectionism and impeded free trade, cooperation between Turkey and Japan has become more valuable. The president drew attention to the rising walls of protectionism across the world and highlighted that such policies and trade wars drag down global growth, creating a negative impact on emerging economies.

Elaborating on Turkish-Japan economic times at a meeting organized by the Japanese Business Federation, Erdoğan underscored the urgency to strengthen the contractual framework of the bilateral commercial and economic rapport.

Stressing the importance of an economic partnership agreement by the end of 2019, Erdoğan said he expected the agreement to strike a balance accounting for the common goal of free trade, as well as the differences in economic development.

"Turkey's exports to Japan only totaled $480 million, while its imports came in at $4 billion last year," the president explained and went on: "We are glad to have Japanese products in our market. While Japanese industrial products can enter the Turkish market freely, our strong agricultural products are under the regime of tariffs and face challenges other than tariffs." Erdoğan remarked that this offset in trade is reflected in the negotiations for the economic partnership agreement.

Speaking of the need to draw more investments from Japan, Erdoğan explained that Japan has $73 billion worth of investments in China and its total investments around the world are calculated at $965 billion. He stressed the divergence between the country's investments in Turkey and other countries. "We need to start negotiations for new investment projects," he said.

The president noted that Japan is Turkey's third-largest trade partner in Asia, and the country is one of the guides of the Turkish industrialization process.

Erdoğan explained how Japanese investors first came to Turkey. At the beginning of the 20th century, a Japanese entrepreneur named Kozui came to Turkey and established the Ankara Industry and Agriculture Limited Company in 1927 and a Turkish-Japanese textile mill in Bursa with Saffet Beyzade Memduh Bey. "In the last 90 years, Turkish and Japanese entrepreneurs have accomplished a great number of projects inspired by Kozui and Memduh Bey.

"Turkey's location provides direct access to the markets of the Mediterranean, the Caucasus, Central Asia, Europe and the Middle East," the president noted. Drawing attention to the success of entrepreneurs in Turkey, Erdoğan underlined that all businesspeople in Turkey were able to resolve any problems they may face. "We not only support international direct investments in legal terms, but we also actively support them in corporate terms," he said.

Turkey's strong market, qualified labor force, strategic geographical position and developed transportation, communication and energy networks offer unique opportunities for Japanese investors, Erdoğan explained. He underlined that over 200 companies financed with Japanese capital are currently operating in Turkey, adding that these companies have invested $3 billion in Turkey over the past decade.

One of recent examples of Japanese investments in Turkey is the air conditioner manufacturing plant established by Mitsubishi in Aegean province of Manisa. The Mitsubishi plant in Manisa not only manufactures air conditioners to be sold in the Turkish market, but it also exports them to regional countries.

Erdoğan emphasized that with the Foreign Economic Relations Board (DEİK) they carried out a successful business council meeting last year. "This year's meeting will take place in November in Tokyo. We will encourage the participation of the most senior representatives of Turkey's leading companies. At this meeting, I see the benefit in exchanging views on the possibilities of acting together in third countries in areas with high cooperation potential, such as contracting," he noted.

Erdoğan also stressed that they want to see more Japanese investors in the energy projects in Turkey. Speaking of another sector related to energy, namely mining, Erdoğan said: "Turkey is a country that holds more than 70 percent of the world's boron reserves, making it a world leader in the production of marble with large lignite deposits. In terms of mineral diversity, we host more than 70 mines. We would like to see more Japanese investors in our mining sector, both in rare and ground elements, and base metals. We would be happy to show Turkey's potential to companies interested in mining."

On the other hand, the president emphasized that Turkey can support Japan on the issue of providing young and qualified human resources to the Japanese labor market.

"The superior quality of Turkish workers is well known by Japanese companies who write success stories in our country. We initiated dialogue between the governments. In this context, we could sign a bilateral employment agreement. The finalization of ongoing negotiations on a social security agreement will provide many conveniences in Turkey for Japanese investors. We expect your support on this matter," Erdoğan said.

In her address at the meeting with Turkish and Japanese businesspeople, Trade Minister Ruhsar Pekcan stated that Japan and Turkey were two great nations living in distant regions but whose friendship exceeded distances. "In this period of uncertainty in global trade, I believe that the trade and economic cooperation of these two friendly countries is of great importance," she added.

Turkey welcomes the increase in trade volume between Japan and Turkey for the intensification of trade relations between the two countries, the minister said.

Pekcan stressed that bilateral trade between the two countries was unbalanced despite this increase, recalling that in 2018, Japan's exports to Turkey amounted to 8.6 times Turkey's exports to Japan. "As Turkey, we want to make our bilateral trade with Japan more balanced and sustainable," she continued. "With the completion of the Japan-Turkey Economic Partnership Agreement, which we have reached the final stage, we aim to increase our trade volume and balance the existing asymmetric structure in our bilateral trade."

Pointing out that the Japanese investments in Turkey would increase significantly with the acceleration to be achieved with the signing and implementation of the free trade agreement (FTA) between the two countries, Pekcan said they aimed to announce the successful conclusion of the Turkish-Japan FTA negotiations as soon as possible. "I believe that FTA can be complemented by both parties showing certain flexibility. To conclude the negotiations in a timely manner, the support of Turkish and Japanese businesspeople is vital," she added.

Trade Minister Pekcan further stressed that they believed that the Japan-Turkey Economic Partnership Agreement would also be an essential tool for developing trade and investment relations between the two countries. "There is great potential for cooperation between our countries in the field of contracting," she noted. "Turkish and Japanese contracting companies are successfully implementing joint projects in third countries. Cooperation in this area will further enhance collaboration between the two countries on other issues, serving as an important catalyst in this context." Pointing to the significant cooperation potential for Turkish and Japanese businesspeople, particularly in sub-Saharan Africa, Central Asia and the Middle East, Pekcan said they aimed to develop co-financing mechanisms for the companies and to increase the current level of cooperation in the coming days.

Kenichiro Yamanishi, the chair of the Japan Business Federation (KEİDANREN) Japan-Turkey Economic Committee, stated that they wanted to hear President Recep Tayyip Erdoğan and Trade Minister Pekcan's expectations of Japanese companies. "We closely monitor the Turkish economy, including exchange rate movements. We would like to quickly sign a comprehensive economic partnership agreement between the two countries," Yamanishi added.

Following the speeches at the meeting, Turkey's Kalyon Holding signed a hydroelectric power plant (HEPP) cooperation agreement with Japanese companies Itochu and Toshiba. The companies will cooperate in the Gökçekaya Project, which will be built on the Sakarya River with a total installed capacity of 1,400 megawatts.