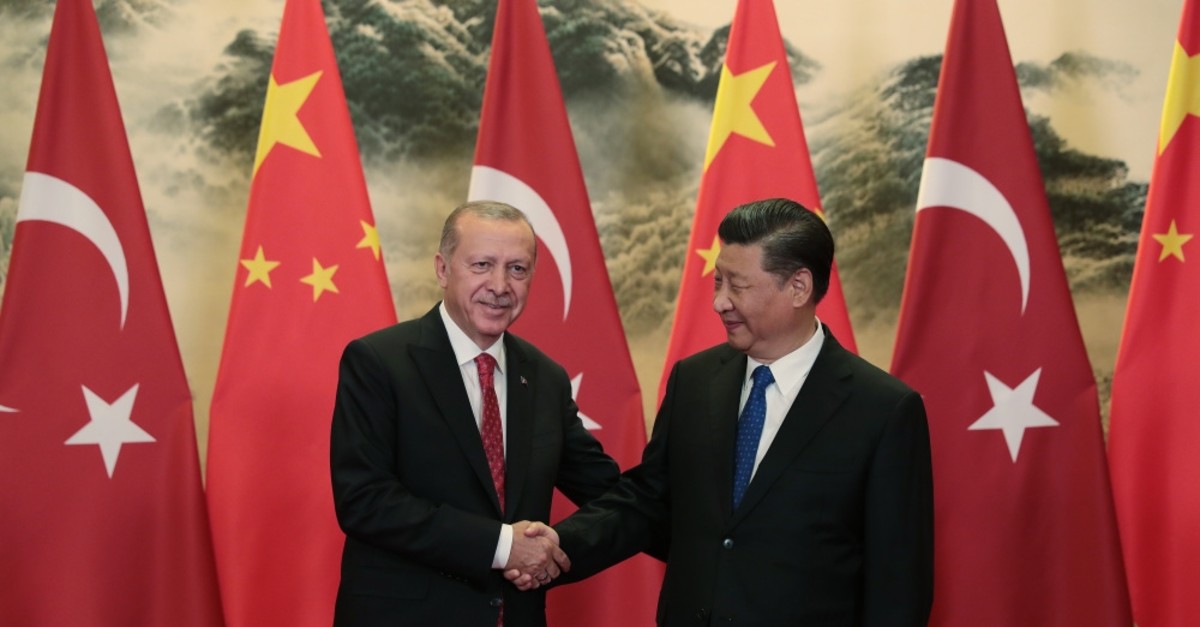 In addition to pledging to further improve bilateral ties, President Recep Tayyip Erdoğan and his Chinese counterpart Xi Jinping agreed that strengthening the strategic cooperation between the two countries will contribute to regional and global stability

President Recep Tayyip Erdoğan was in Beijing Tuesday on an official visit, during which he met with his Chinese counterpart Xi Jinping to weigh in on mutual issues concerning the two countries and exchange views on ways to further strengthen economic and political ties. Erdoğan's visit came after the G20 summit in Osaka, Japan, held over the weekend, which he followed by paying an official visit to Japan on Monday, during which he held productive meetings with his fellow world leaders. Following a meeting with his Chinese counterpart yesterday, Erdoğan affirmed the importance of ties with China.

"I believe Turkey and China have great potential for strengthening cooperation," he said after their meeting at the Great Hall of the People that lasted an hour and 10 minutes. The president said the two countries have enjoyed a thousand years of ties across ancient civilizations connected by the ancient Silk Road. "This visit to China is happening at a time of increased testing of global peace and stability. The strengthening of Turkey-China relations will also provide large and diverse contributions to regional and global stability," Erdoğan said. In his remarks on the Turkish-Chinese rapport, Xi pointed out that Turkey and China are both solid emerging markets that should boost strategic confidence and strengthen cooperation and coordination. The Chinese president emphasized that bilateral meetings in Beijing are of great importance for China and said, "Turkey and China should protect the international system, which has the United Nations at its center, and jointly vouch for multilateralism and international justice."

Turkey and China, Xi added, must continue to protect international trade mechanisms under the canopy of the World Trade Organization (WTO). Xi also stressed that Beijing is ready to plan and navigate the future of the Turkish-Chinese strategic relations and protect the interests of other nations.

Prior to his arrival in Beijing, Erdoğan wrote in a guest op-ed for China's Global Times and gave an interview to the state-run news agency Xinhua about the goals of the visit and elaborated on the relations between the two countries.

In an op-ed for the Global Times, Erdoğan highlighted the importance of Turkish-Sino ties and emphasized that both Ankara and Beijing have "major responsibilities as a new world order emerges."

The president indicated that Turkey and China share the same vision of world peace, global security and stability, as well as multilateralism and free trade.

"Turkey shares China's vision when it comes to serving world peace, preserving global security and stability, promoting multilateralism, and upholding the principle of free trade. The world seeks a new, multipolar balance today. The need for a new international order, which will serve the interests of all humanity, is crystal clear. Turkey and China, the world's most ancient civilizations, have a responsibility to contribute to building this new system," Erdoğan said in the piece titled "Turkey, China share a vision for future."

In an interview with Xinhua, Erdoğan emphasized that maintaining momentum in relations between Turkey and China is crucial to both the welfare of their people and international stability.

"We are on the same page regarding President Xi's approach for the initiative, which is not only to improve transport and communication networks and construct trade corridors and to harmonize trade policies and development strategies, but also to boost cultural and human ties in this framework," he said.

"We are acting in line with the conscience that the Sino-Turkish economic and trade partnership, besides its regional benefits, has potential to contribute to world peace, prosperity and stability," Erdoğan noted.

He stressed that the issues of economy, trade, tourism, investment, security, defense and counterterrorism will be given more priority as areas of bilateral cooperation, while regional and international issues on the common agenda will also be discussed during his visit.

"We have a concrete bilateral agenda on how we can improve our partnership," he said. "I believe that we will witness together how our relations will be upgraded in all fields when we boost our consultations with our Chinese friends."

In the op-ed for the Global Times, Erdoğan highlighted that despite their geographical distance, Turkey and China have maintained close economic and cultural relations for centuries.

"The Chinese and Turkish people, both representatives of ancient civilizations on the opposite ends of the Asian continent, have served humanity greatly by watching over the Silk Road and promoting commercial and cultural interaction," he added.

Touching on China's ambitious Belt and Road Initiative (BRI), Erdoğan underlined that centuries-old cooperation between the nations continues to grow stronger today thanks to the BRI under the leadership of China's President Xi Jinping.

"The Republic of Turkey is a strong supporter of the BRI. As a matter of fact, we were one of the first countries to endorse this initiative back in 2013," the president added.

Turkey is a key link in China's trillion-dollar initiative. Referred to as the 21st century Silk Road, it is a development strategy announced by Jinping in 2013 to improve regional cooperation. China's initiative will include the building of ports, highways, power plants and other infrastructure linking it to Europe, Africa and Asia.

As Erdoğan was among the earliest and most enthusiastic backers of the Chinese initiative, the economic partnership between two of Asia's most important powers has continued to blossom since then.

The BRI has expanded Chinese overseas investments and Turkey, located in the middle corridor of the project, has seen a spike in the volume of capital it has been drawing in from China over the past five years. While more than 1,000 Chinese firms operate in Turkey's logistics, electronics, energy, tourism, finance and real estate sectors, the expectations for renewable energy investments from China are also on the rise.

"The Middle Corridor, an initiative led by Turkey, lies at the heart of the BRI. It is an important component of the project, which links Turkey to Georgia and Azerbaijan via rail, crosses the Caspian Sea and reaches China through Turkmenistan and Kazakhstan," Erdoğan said.

Citing the recently launched Baku-Tbilisi-Kars (BTK) Railroad Project, the president said Turkey also invested in other projects as part of the Middle Corridor, such as Yavuz Sultan Selim Bridge over the Bosporus, the Eurasia Tunnel and the Marmaray running under the Bosporus, the 1915 Bridge over the Dardanelles, highways, high-speed railways, logistics hubs and communication infrastructure.

"Those projects will directly contribute to the BRI's goal of connecting Beijing to London," Erdoğan said. "By saving time and serving the world, the Middle Corridor will make a valuable contribution to the BRI. In this regard, we will continue to work with our Chinese friends to integrate the Middle Corridor into the BRI," he added.

Furthermore, Erdoğan said bilateral relations between the two countries reached the level of a strategic relationship in 2010, as both Turkey and China kept developing "mutual respect and common interests."

"We aim to further improve win-win relations by sharing a vision for the future − as embodied by the BRI," he wrote.

As late modernizers, the president added, Turkey and China are among countries seeking to bridge their development gap with Western nations in the 21st century. "In other words, the 'Chinese dream' is to see China where it deserves to be on the world stage, just as the 'Turkish dream' is to witness our nation secure the place it deserves in the international arena. Just as China has identified goals for the Communist Party of China's centennial in 2021 and the centennial of the People's Republic of China in 2049, Turkey has a set of objectives for 2023, the republic's centennial, and 2053. Those targets, which aim to transform our countries into welfare societies, are among the many things that Turkey and China have in common," Erdoğan said.

In the article, the president also elaborated on tourism and trade relations between the two countries.

"Our strengthening bilateral cooperation promotes greater interaction between our people and facilitates progress in the area of tourism. China marked Turkey Tourism Year in 2018 and hosted dozens of events around the country," Erdoğan said, expressing the pleasure over the rise in the number of Chinese tourists visiting Turkey.

"As we work toward our goal of hosting 1 million Chinese tourists, a target that I set together with President Xi, the bilateral relations between our countries will further improve," he added.

He also noted that the two countries aim to double their bilateral trade volume to $50 billion and, subsequently, $100 billion. "I call on the Chinese business community to invest in Turkey - the crossroads of Asia and Europe, and the heart of the BRI," Erdoğan wrote.

Moreover, the president emphasized that Chinese investments in Turkey "will be a commitment to the world's 16th largest economy with 82 million young and dynamic citizens as well as our nation's hinterland with 1.6 billion people and a $24 trillion gross national product. Most importantly, an investment in Turkey is an investment in the BRI and our dream of building future together."

Erdoğan also reiterated Turkey's firm commitment to strengthening its cooperation with China in all areas, including education by taking the initial step to establish joint universities and defense.

"In the area of defense, Turkey and China proved their technological and manufacturing capabilities to the world by launching original projects in recent years," he said.

"Such threats, which reflect the misconception that we still live in a unipolar world, undermine global peace and stability," he added.

Stressing the need for a new international order that would serve the interests of all humanity, Erdoğan wrote, "Turkey and China, the world's most ancient civilizations, have a responsibility to contribute to building this new system."