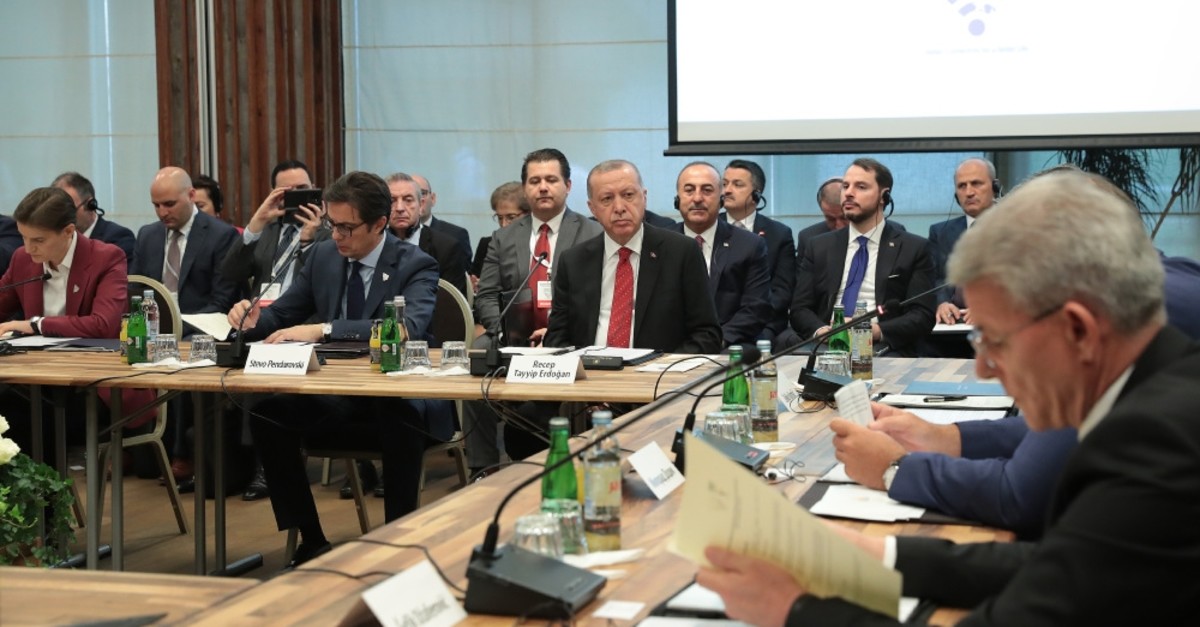 Poised to boost the development and welfare of the region, construction of the Turkey-supported highway project that will link the capitals of Bosnia-Herzegovina and Serbia, namely Sarajevo and Belgrade, is set to start soon

"The Sarajevo-Belgrade Highway represents a strategic project; we aim to connect the whole region with it. We plan to start this project soon," Erdoğan added.

The president's remarks came on the sidelines of the two-day summit, during which topics such as economic cooperation, security and cooperation among the Balkans were discussed.

Calling the Sarajevo-Belgrade highway project a "peace highway," Erdoğan pointed to its exceptional importance, especially when it comes to increasing cooperation and connectivity.

The Turkey-sponsored highway is set to link Sarajevo with the Serbia's capital Belgrade through a route that was agreed on by officials of Bosnia-Herzegovina in February.

The highway will go from Raca via Bijeljina, then across Brcko and Loncar, down to Sarajevo, through Tuzla and Zepce, next to Pale, Rogatic and Visegrad, where a connection is being made for Gorazde. It will connect to Serbia at Vardiste near Visegrad.

The project was brought up more than two years ago, but it hit a snag over its route, with 16 different paths proposed.

However, the dispute over the routes ended following a meeting in Turkey between Erdoğan, Serbian President Aleksandar Vucic, and a former Bosniak member of the Bosnia-Herzegovina Presidential Council, Bakir Izetbegovic.

With Erdoğan's support, the proposals of both sides were accepted, and it was agreed that the highway will be built on two different routes.

Milorad Dodik, a Serbian member of the Bosnia-Herzegovina Presidential Council, said the entire project will cost nearly $3.41 billion, and Turkey is ready to provide the necessary funds.

Ankara and Sarajevo signed a memorandum of understanding for the construction of the highway on the sidelines of a visit by members of the Bosnia-Herzegovina Presidential Council in May.

Erdoğan then stressed that the project would boost the development and welfare of the region while contributing to the increase of Turkey's trade with Bosnia-Herzegovina.

In December 2018, Turkey's Taşyapı Group signed a contract with the Serbian government for the highway. Ankara sees the highway's role as a guarantor for peace in the region.

In her address at the summit yesterday, Serbian Prime Minister Ana Brnabic pointed to Turkey's support and partnership with her country and Bosnia-Herzegovina.

Brnabic thanked Erdoğan and Turkey for their support.

"With Turkey's initiatives, we will start construction of the highway that will link Serbia and Bosnia-Herzegovina to each other by the end of July," she said.

"We should boost our cooperation as the Balkan countries in order to increase our competitive strength in a globalizing world," Erdoğan further said in his speech yesterday.

"As the world becomes more and more digitalized, it is unimaginable for us to lag behind on this issue. It is important for us to reinforce the digital infrastructure networks among our countries," he added.

The president further stressed that "as the Balkan countries, one of our most precious resources is our young populations with technology literacy. It is a must for us to become a region that meets the economic necessities of the 21st century and encourages technological innovation."

On Monday, the president met with members of the Bosnia-Herzegovina Presidential Council, while he also met Slovenia's President Borut Pahor and received Bulgaria's Prime Minister Boyko Borissov later in the day.

The SEECP was initiated in 1996 with the goal of transforming southeastern Europe into a region of stability, security and cooperation in line with the European integration processes and through the promotion of mutual dialogue and cooperation at all levels and in all areas of common interest.