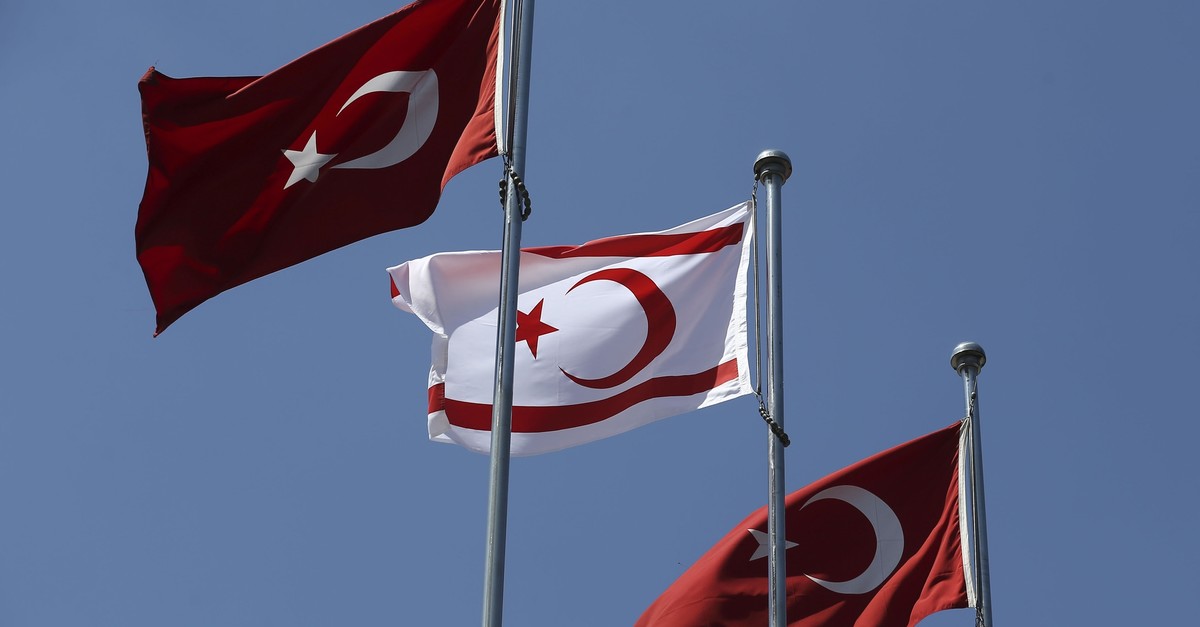 Commemoration events were held in the capital of the Turkish Republic of Northern Cyprus, Nicosia, on the 45th anniversary of the Cyprus Peace Operation, July 20, 2019.
by Daily Sabah with AA Jul 22, 2019 12:02 am

On the 45th anniversary of the Cyprus Peace Operation Turkish officials emphasized that Turkey would never give up its efforts to secure the sovereign rights of its people and Turkish Cypriots, despite a global outcry and threats of sanctions

On the 45th anniversary of the Cyprus Peace Operation, which Turkey carried out on July 20, 1974, to save the lives of Turkish Cypriots living predominantly in the north of the island who had been suffering from oppression by the Greek Cypriot militia, Ankara once again reiterated its commitment to continued efforts for hydrocarbon drilling in the Eastern Mediterranean to protect the sovereign rights of the Turkish Cypriots and the Turkish people. In his message released on the 45th anniversary of Cyprus Peace Operation on Saturday, President Recep Tayyip Erdoğan pledged to safeguard the rights and interests of Turkish Cypriots.

"Those who dream of changing the fact that Turkish Cypriots are an integral part of the Turkish nation will realize it is in vain," the president said. Erdoğan continued by noting that Turkey and the Turkish Republic of Northern Cyprus (TRNC) will oppose efforts by the Greek Cypriots to exploit the island's resources. Ankara has made continuous efforts to protect its sovereign rights and the rights of Turkish Cypriots in the Eastern Mediterranean region, where it has been drilling in its exclusive economic zone (EEZ), which was registered with the United Nations in 2004. However, the Greek Cypriots unilaterally declared their own EEZ, inked maritime delimitation agreements with other countries in the region and invited a great number of international energy firms to benefit from the hydrocarbon discoveries in the region, which began 10 years ago in Israel. The putative EEZ the Greek Cypriot government declared also violates a part of the Turkish continental shelf, particularly in Blocks 1, 4, 5, 6 and 7.

The president recalled that the military operation in 1974 came after all diplomatic steps were exhausted in line with the international law and added: "Those who think the wealth of the island and the region only belongs to them will face the determination of Turkey and Turkish Cypriots." Erdoğan highlighted that Turkey's aim was a fair and permanent solution on the island and for peace, not tensions to prevail in the Eastern Mediterranean.

The July 20 Peace and Freedom Day in the Turkish Republic of Northern Cyprus commemorates Turkey's Cyprus Peace Operation − a huge military intervention to protect Turkish Cypriots from the violence which struck the island 45 years ago.

The Cyprus Peace Operation was Turkey's first military operation abroad in the Republican era and came after two-decades of intercommunal violence where Turkish Cypriots were targeted and massacred by the Greek Cypriot pro-independence militia during the period of British colonial rule, and after independence in 1960. Turkish people on the island were confined to enclaves starting from 1963 to protect themselves against Greek militia groups.

At anothed event in nicosia yesterday, Oktay also said, "Turkey has always defended the Eastern Mediterranean to be a sea of peace and thus the natural resources should be fairly removed and shared."

"Those who intend to limit Turkey's continental shelf to the Antalya Gulf should know that, we will resolutely continue our exploration and drilling activities. Our country will continue to protect both its own rights and the rights of Turkish Cypriots in the most powerful way, as before," he added.

NOT BOWING DOWN TO THREATS OF SANCTIONS

The European Council published a final declaration last week following a meeting of the EU's Foreign Affairs Council attended by foreign ministers of member states. The council said in the statement that in light of Turkey's "continued and new illegal drilling activities," it would suspend civil aviation negotiations and "agree not to hold the Association Council and further meetings of the EU-Turkey high-level dialogues for the time being."Following the European Union Foreign Affairs Council decision, Turkey said it will increase its activities in the Eastern Mediterranean and send a fourth ship to the region. The energy and natural resources minister said on Thursday the national seismic exploration vessel Oruç Reis would be sent to the Mediterranean within the next month to conduct seismic research for oil and gas around Cyprus after completing its current activities in the Marmara Sea.

TRNC President Mustafa Akıncı, for his part, said Turkey's 1974 military operation launched to protect the Turkish population in Cyprus led to a two-sided substructure based on equality and security, preventing Enosis - the annexation of islands in favor of Greece.

Akıncı pointed out that the TRNC's proposal aimed to avoid unilateral attempts, however, he said "the situation has become tense especially due to the natural gas deposits in the Eastern Mediterranean." "Since these resources are considered to be our common wealth, we have proposed to establish a joint committee to evaluate them and decide

on these issues," Akıncı added. He recalled the Greek Cypriot side rejected the proposal and took a unilateral approach. Akıncı presented the proposal to the United Nations last week, calling for the joint use of Cypriot resources and cooperation between the two sides in the search for gas off the island. Turkey welcomed and fully supported the proposal, saying it envisages cooperation, including revenue sharing that enables the two sides to benefit from hydrocarbon resources simultaneously.

Ankara called on the U.N., EU and particularly the guarantor states to take the opportunity and to encourage cooperation on the island's hydrocarbon resources. However, Greek Cypriots rejected it on Tuesday, saying in a statement the proposal was far from the essence of the Cyprus problem and could not be accepted because it contained elements that did not serve Greek Cypriot interests.

Turkey's presence in the Eastern Mediterranean

Turkey has consistently contested the Greek Cypriot administration's unilateral drilling in the Eastern Mediterranean, asserting that the TRNC also has rights to the resources in the area. Since this spring, Ankara has sent two drilling vessels - the Fatih and most recently the Yavuz - to the Eastern Mediterranean, asserting the rights of Turkey and the TRNC to the resources of the region.

The Turkish-flagged drillship Fatih launched its offshore drilling operations on May 3 in an area located 75 kilometers off the western coast of Cyprus. The area falls entirely within the Turkish continental shelf registered with the U.N. and in permit licenses that the Turkish government granted to Turkish Petroleum in 2009 and 2012.

The second Turkish drillship, Yavuz, arrived south of the Karpas Peninsula on the eastern edge of the island recently and is expected to launch drilling operations soon. Yavuz will operate on behalf of Turkish Cypriots within the areas granted by the TRNC to the Turkish Petroleum in 2011. Turkey's first seismic vessel, the Barbaros Hayrettin Paşa, has been carrying out exploration in the Mediterranean since April 2017.

The chain of events that set the stage for Turkey's Cyprus Peace Operation in 1974 has its roots in the mid-1950s when EOKA, a terror group seeking Enosis − the annexation of islands in favor of Greece − started oppressing and killing local Turkish Cypriots.

EOKA terrorists sought the removal of Turkish Cypriots to remote parts of the island in what can only be described as ethnic cleansing. The terror group's brutal violence forced Turkish Cypriots of least 33 mixed villages to abandon their homes from 1955 to 1958.

Ankara and Athens came to terms on Feb. 11, 1959, with the approval of the U.K. as well as leaders of the island's conflicting communities.

The Zurich and London agreements paved the way for independence, intercommunal harmony and societal autonomy with Turkey, Greece and the U.K. − their guarantors. The pacts precipitated the establishment of the Republic of Cyprus in 1960, which would provide equal rights to all residents of the island.

On Dec. 21, 1963, systematic and comprehensive attacks against Turkish Cypriots began while their representatives in state institutions were discriminated against and alienated by their Greek Cypriot counterparts.

This aggressive campaign led to the "Bloody Christmas" of 1963, in which 103 villages inhabited by Turkish Cypriots were targeted resulting in the deaths of hundreds. The tipping point came on July 15, 1974, when then-President of Cyprus Makarios was ousted by the ultra-nationalist and anti-Turkish Nikos Sampson, one of the leaders of EOKA-B – a Greek Cypriot paramilitary organization formed in 1971. Having learned about the coup, which was supported by the military junta running Greece at the time, Ankara was quick to respond. On July 20, 1974, Ecevit announced the start of the operation, which he said would "have a great contribution to mankind and peace."

The Turkish operation prevented the annexation of Cyprus and provided protection to Turkish Cypriots who had suffered for years at the hands of the radical Greek Cypriots. The decades since have seen several attempts to resolve the Cyprus dispute, all ending in failure. The latest one, held with the participation of the guarantor countries − Turkey, Greece, and the U.K. − ended in 2017 in Switzerland.

Talks have focused on a federal model, based on the political equality of the Turkish and Greek Cypriot sides, but the Greek Cypriots' rejection of such a solution, including the Annan plan, led to the emergence of other models. In a recent report, U.N. Secretary-General Antonio Guterres also said that "new ideas" may be needed for a settlement on the island.