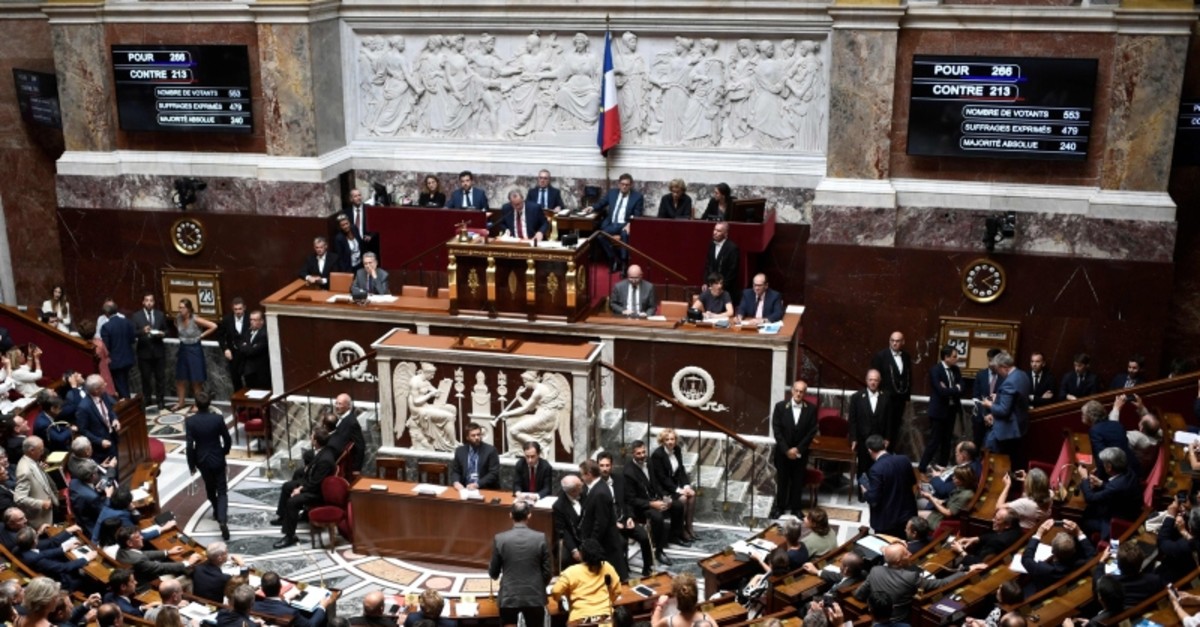 French members of Parliament leaves the National Assembly hemicycle after a vote to ratify the CETA during a session at the French National Assembly in Paris on July 23, 2019 (AFP Photo)
by Jul 24, 2019 2:06 am

France's National Assembly voted Tuesday to approve a free trade deal between the European Union and Canada, despite opposition from climate protection groups.

A total of 266 representatives in the lower house of parliament voted for the pact, while 213 were against the Comprehensive Economic and Trade Agreement (CETA).

The trade deal is already provisionally in force but must be ratified by all 28 member states to take full effect.

CETA split French President Emmanuel Macron's centrist party, La République en Marche (The Republic on the Move, LREM); while most of its representatives voted for the deal, quite a few abstained and a few even voted against the pact.

The upper house of the French parliament, the Senate, will now vote on the legislation.

French Foreign Minister Jean-Yves Le Drian, calling on deputies to support the deal in debate last week, said it was "a new-generation agreement that deals with trade issues alongside social and environmental issues in a logic of sustainable development."

But Socialist deputy Laurence Dumont argued that the agreement could put into question "years of work [...] transforming our modes of production and consumption for the sake of the environment, sustainable development and the health of Europeans."

Dozens of French non-governmental organizations had called on lawmakers to reject the treaty, arguing that it creates risks for the environment.

Adding to the climate concerns was a speech by young Swedish climate campaigner Greta Thunberg in the National Assembly earlier in the day calling for more climate protection. She had been invited by several members of the legislative body.

An expert panel appointed by Prime Minister Edouard Philippe concluded that the agreement did not introduce new risks for the environment, but did involve "missed opportunities."

Climate issues were "the great absence," the panel said, proposing that the agreement should be amended to include a "climate veto" to ensure that its system for settling disputes could not be used by aggrieved investors to strike down climate protection measures.

Canadian officials said they were pleased with the results of the vote, which they qualified as "an important step towards ratification" of the free trade deal by France.

"This is good news for Canadians as it creates more middle-class jobs and opportunities for our businesses to sell our high-quality goods and services across Europe," said Zara Rabinovitch, a spokesperson for Canada's International Trade Minister Jim Carr.

The free trade deal was signed in October of 2016 and entered into provisional force in September 2017, sweeping away tariffs on 98 per cent of goods.

According to European Council statistics, trade between Canada and EU increased by 10.5 per cent in 2018 compared to the previous year.

Once the Senate approves the deal, France will become the 14th EU country to ratify CETA.