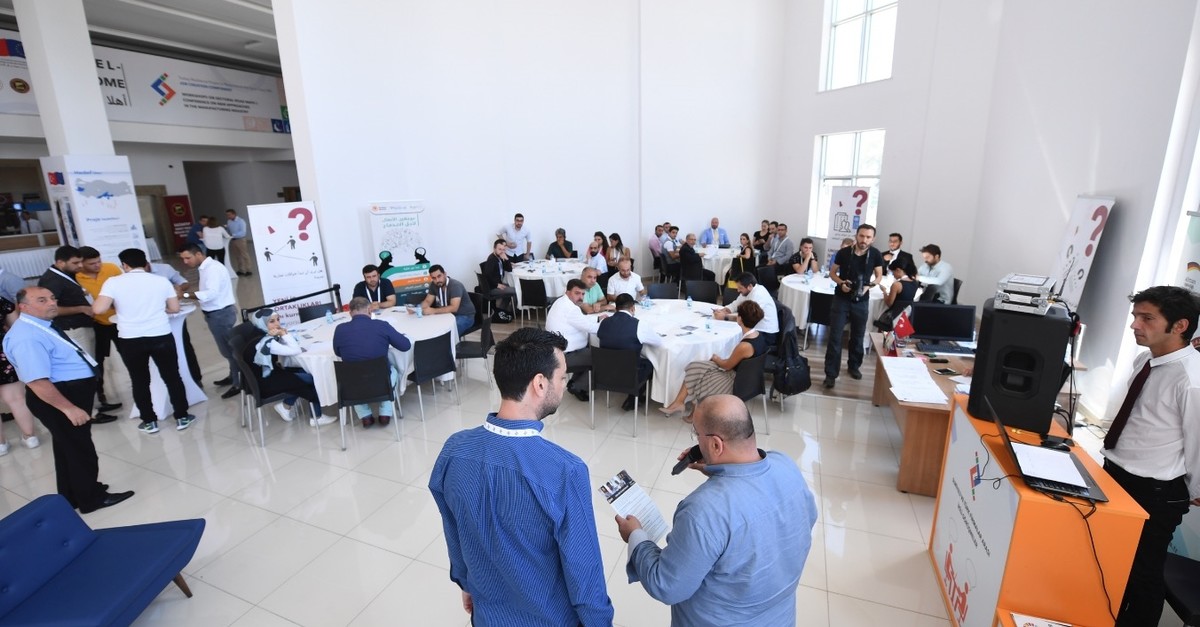 The u2018resilienceu2019 project aims to deliver comprehensive solutions to problems of displaced Syrians who are now living in Turkey & in other host communities, focusing on job creation, strengthening national & local services & Turkish language training.
by Yasemin Nicola Sakay Aug 06, 2019 12:05 am

As part of our press trip to Gaziantep, a sprawling industrial city on Turkey's southern border with Syria, we, the Daily Sabah, got a glimpse into a promising project that focuses on meeting the needs of refugees and their host communities and were able to speak with Syrian and Turkish entrepreneurs and businesspeople about the impact of such initiatives. A two-day workshop and conference as part of the Turkey Resilience Project – initiated in response to the Syria Crisis (TRP) project implemented by the United Nations Development Program (UNDP) in cooperation with the Ministry of Industry and Technology was held last week on July 30-31 in Gaziantep, to draw up road maps for various sectors and discuss new approaches in the manufacturing industry.

In her opening speech for the "Workshops on Sectoral Roadmaps," Seher Alacacı, assistant resident representative of UNDP Turkey, said they had two target groups: Firstly Syrians, who have fled a major humanitarian crisis and taken refuge in Turkey, and secondly,local communities and municipalities that have been strained by the rapid population growth.

"We aim to contribute to the economic, social, cultural, institutional and individual resilience of both groups with this project," Alacacı said.

The project's goals and scope can be categorized into three main areas:

With the TRP project, which was launched on Feb. 1, 2018 with a 50-million-euro budget financed by the EU Trust Fund in Response to the Syrian Crisis (EUTF), Alacacı said, "Our target is to create more job opportunities in 11 provinces, and provide employment to 2,000 people – 50% of whom will be Syrians and the rest host communities – at the end of two years."

Alacacı underscored that within the scope of the project, Syrians and host communities would be given training on entrepreneurship, and activities aiming to raise awareness on issues such as proving employment services and supporting women's participation in the labor market would be held year-round.

Language training is another crucial component of the project, Alacacı said, as it eliminates one of the biggest barriers facing Syrians in the business world, thereby helping them access formal employment.

She also announced that Competence and Digital Transformation Centers envisaged for the provinces of İzmir, Mersin and Gaziantep – where a large number of Syrians reside – would start operating this year, helping raise awareness about lean manufacturing and inform the public about the transition to Industry 4.0 (dubbed "the Fourth Industrial Revolution") and digital transformation. These centers, as subsidiary projects, will provide an estimated 75,000 job opportunities, she added.

Alacacı said these centers will provide both theoretical and practical training for small and medium-sized enterprises, as well as offer consultancy services for companies to realize lean manufacturing. The Ministry of National Education, İlbank and the Gaziantep Chamber of Industry (GSO) are also collaborating with the UNDP on this project. 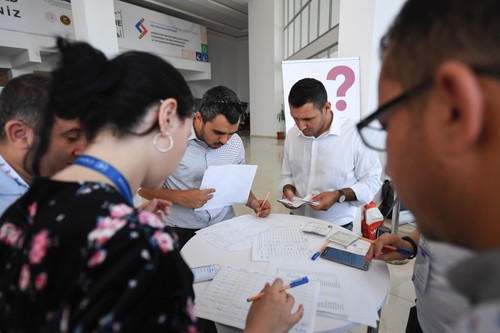 "These centers will be established to increase the productivity of companies, provide the necessary technical support to produce high-value-added products and support their potential to create new jobs," she added.

These consultancy and mentoring services will be offered free of charge to five companies or business owners each from four sectors, which are machinery and metals, chemicals and plastics, food and textiles. At the end, the selected businesses will learn:

Speaking to the Daily Sabah after her speech, Alacacı said evaluations and reports would be prepared after the project officially concludes. The results, according to Alacacı, will be reflected in sectoral road maps. These will help the Turkish government and international organizations better assess which sectors and fields would benefit from the current local Syrian population in terms of employment and categorize Syrians' skill sets to steer them in the right direction in the business world.

Alacacı said the Syrian crisis is entering its ninth year this year. At this point, social and economic integration is becoming more important because it is not likely that the Syrian population will be able to return to their country in the near future.

"When we try to integrate them into the Turkish society, we want to do it in a way that effectively uses this human resource and makes positive contributions to Turkey's economy," she noted.

"That's why in all the projects and activities we do, Syrians and the host communities are our target subjects, so that both of them together can achieve social cohesion and harmony," Alacacı said, adding that this way, the funds allocated for Syrians also help the growth of the local economy, municipalities and the host community.

Acknowledging the conflicts between both populations on issues such as employment, Alacacı said this strategy would also help avert potential tensions.

"Wherever there are cultural differences, differences in working culture or family culture, there will be conflict. We are trying to create a working environment where both populations can thrive, and create a shared culture to stop this."

She added that the UNDP, in collaboration with the GSO and the Metropolitan Municipality, will also provide mentoring to Syrian businesses and entrepreneurs to help them enter the national and international investment environment.

Underscoring that they receive numerous applications to carry out projects to help Syrians, Alacacı said they looked for long-term and sustainable ideas and projects that are based on partnerships and in line with Turkey's development goals and priorities.

Although the project acts as a precursor and puts forward an example of "best practices" for others to follow, Alacacı said as UNDP Turkey they were disappointed in the amount of funding they received from benefactors, as it was still insufficient.

"Some (benefactors) want immediate results, so they donate toward emergency humanitarian aid, but we are trying to turn this into a long-term development plan and carry this strategy into the national and international agenda," she said.

BUMPS IN THE ROAD

When asked what sort of hardships they encountered in the beginning of the project, Alacacı said the biggest obstacle they faced was a lack of coordination and coordination mechanisms on a national and local level.

"Actually a team has been established at the Presidency so these funds can be used more effectively and transferred to necessary institutions in a coordinated way. However, there are so many transfers (of funds) and so many projects that sometimes communication and coordination between different departments can be very limited," she said.

Alacacı acknowledged that needs were endless, but as Turkey and the international community, "we must focus on making the most out of the little we have and use our limited funds much more efficiently and effectively."

Alacacı said another problem they faced stemmed from the fact that the population of displaced Syrians is not homogenous.

"We can't say these are exactly the needs of all Syrians because every subgroup has different needs, and this problem alone creates social cohesion issues," she said, reiterating that contextual and environmental assessments were key in this aspect. Solutions focusing on a certain area, or sector in this case, yielded better and more productive results, she noted.

Alacacı also highlighted the need for coming up with policies that take into account the local host community as well, saying, "The model we foresee for İzmir doesn't fit Antep, and the one in Antep might not be the best for Maraş."

As the longest-serving international organization in Turkey, the UNDP also wanted to conduct an impact assessment at the end of the project and in the following years to see the social and economic changes in the area, Alacacı said.

'GAZIANTEP SHOULD BE A BIGGER PART OF TURKEY'S FUTURE VISION'

GSO Chairman Adnan Ünverdi said that with $7 billion of exports in 2018 and $3.6 billion so far in the first six months of 2019, Gaziantep should have a bigger role in Turkey's vision through its industrial infrastructure, range of sectors, workforce potential and its geopolitical position.

He also underlined that Gaziantep, as the gateway of the historical Silk Road to Anatolia, continues to bolster the national economy with its entrepreneurship projects and high-productivity levels.

After connecting the planned Polateli-Şahinbey Organized Industrial Zone to the Iskenderun Port via the Hassa-Dörtyol Tunnel project, "our distance to the port will be reduced to 87 kilometers (54 miles), paving the way for Gaziantep to become a hub for international companies between Asia and Europe," Ünverdi said.

He reiterated that when the situation in Syria calms down, a great ecosystem will emerge in this region and "those who invest in this region today will be the winners of tomorrow."

"Even now, despite the difficulties we experience in the region, our exports from Gaziantep to Syria continue to increase with every passing day. We of course want to further increase our business volume. To achieve this, we are working on strengthening our city's industry and increasing our employment power," he said. "As part of this goal, we hope to contribute to Workshops on Sectoral Roadmaps and Conference on New Approaches in the Manufacturing Industry. We find every step and project that supports the development of our industry very valuable."

According to Ünverdi, by entering into new partnerships with their Turkish counterparts and growing in Gaziantep, Syrian businesspeople and entrepreneurs will not only create new job opportunities for Syrians but also help rebuild their war-torn country.

Mustafa Kemal Akgül, the head of the Productivity Applications Department of the Directorate General for Industry and Productivity within the Ministry of Industry and Technology, stated that within the scope of the program, model factories in Gaziantep, Adana, Mersin and İzmir had accelerated their efforts to open competence centers.

He said the planned competence and digital transformation center in Gaziantep would be opened within the month of December.

"As part of our goal to create 2,000 jobs, training has been given to nearly 1,000 people already," he said, reiterating the importance of strengthening the industry as well as preserving existing employment. "Nearly 650 entrepreneurs or businesspeople in the sector have benefited from these entrepreneurship trainings," he added.