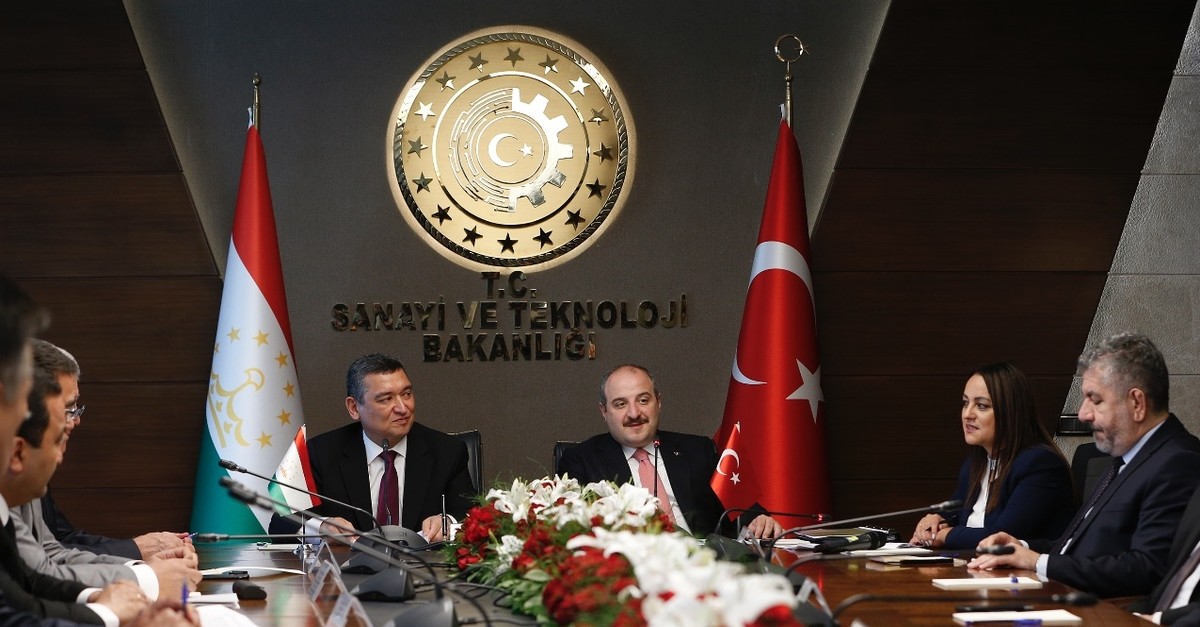 As countries that have close cooperation and are important trade partners, Turkey and Tajikistan are poised to boost efforts to bring their trade volume to $1 billion in the coming period

Enjoying close political and commercial relations, Turkey and Tajikistan are eager to more than double their current bilateral trade volume, seen as not reflecting the real potential of the two countries.

Development of economic relations between Turkey and Tajikistan would be beneficial for all Central Asian countries, Industry and Technology Minister Mustafa Varank said.

"We achieved a trading volume of $380 million in 2018, but these figures do not reflect our real potential. At this point, we aim to increase our foreign trade volume to $1 billion in the medium term," Varank said in his address at the 10th Term Meeting of Turkey-Tajikistan Intergovernmental Joint Economic Commission (JEC), co-chaired by Varank and Tajikistan's Minister of Economic Development and Trade Nematullo Hikmatullozoda.

Prior to the event, the two ministers held a bilateral meeting, which was followed by the signing of a cooperation protocol.

President Recep Tayyip Erdoğan paid a visit to Tajikistan in June to attend the 5th Summit of Heads of State of the Conference on Interaction and Confidence Building Measures in Asia (CICA), on the sidelines of which Erdoğan met with his Tajik counterpart Emomali Rahmon and held bilateral talks.

The first concrete steps of the goal set by the leaders during the visit have been taken, Varank said.

The minister further pointed out that Turkey and Tajikistan were two countries with a common historical and cultural heritage.

"Tajikistan is a country with the potential to become both the center of gravity and logistics base of Central Asia. I believe the relations that we will improve will provide many benefits for all countries in the region," he noted, stressing that Turkey and Tajikistan are two important trading partners that turned their relations into mutual benefits.

"Turkey ranks second in Tajikistan's exports and fifth in imports. There had been an undesired decline in our foreign trade. This decline was then recovered by concrete steps taken by the two countries with mutual commitment," he continued. "We achieved a trading volume of $380 million in 2018, but these figures do not reflect our real potential. At this point, we aim to increase our foreign trade volume to $1 billion in the medium term."

Pointing to the role of states and government officials, as well as private sector representatives, in increasing bilateral trade, the minister said this was precisely why they came together at the joint economic commission meeting.

The protocol signed between the two countries covers cooperation in fields, such as investment, industry, technology, agriculture, energy, transportation, contracting, education, culture and tourism. Turkey has become a global exporter in many sectors such as automotive, defense industry, telecommunication, textile and electrical-electronics in recent years, Varank said.

"One of the shareholders of this success is our small and medium-sized enterprises (SMEs). SMEs are the cornerstones of the Turkish economy and social development. We also plan to transfer our experience and know-how in this field to our friend and sister country, Tajikistan," Varank further stressed. "During President Recep Tayyip Erdoğan's visit to Tajikistan, a step will be taken at this point. We foresee the signing of a memorandum of understanding between the Small and Medium Industry Development Organization (KOSGEB) and its counterpart in Tajikistan."

He highlighted that the increase in air travel and the inclusion of cargo planes in the system would contribute to the political, cultural and economic cooperation between Tajikistan and Turkey. "I hope Turkish companies will play an active role in the superstructure and infrastructure works in Tajikistan as in other countries in the coming period," he noted. It is crucial to update the Agreement on the Mutual Encouragement and Protection of Investments between the two countries, Varank added.

On the other hand, Hikmatullozoda said they evaluated the existing commercial and economic relations and discussed the issues related to their development during their bilateral meeting with Varank.

He indicated that the 10th JEC meeting would further expand the relations between the two countries and contribute to the commercial and economic cooperation.

"In the protocol inked within the scope of the meeting, measures to increase our trade volume were determined," Hikmatullozoda continued. "It was decided to work toward the establishment of joint enterprises in the light industry and food processing industry. The issues related to the establishment of transportation and logistics centers, as well as energy science technology, industry, tourism, and other issues, came to the fore as the factors to improve cooperation."