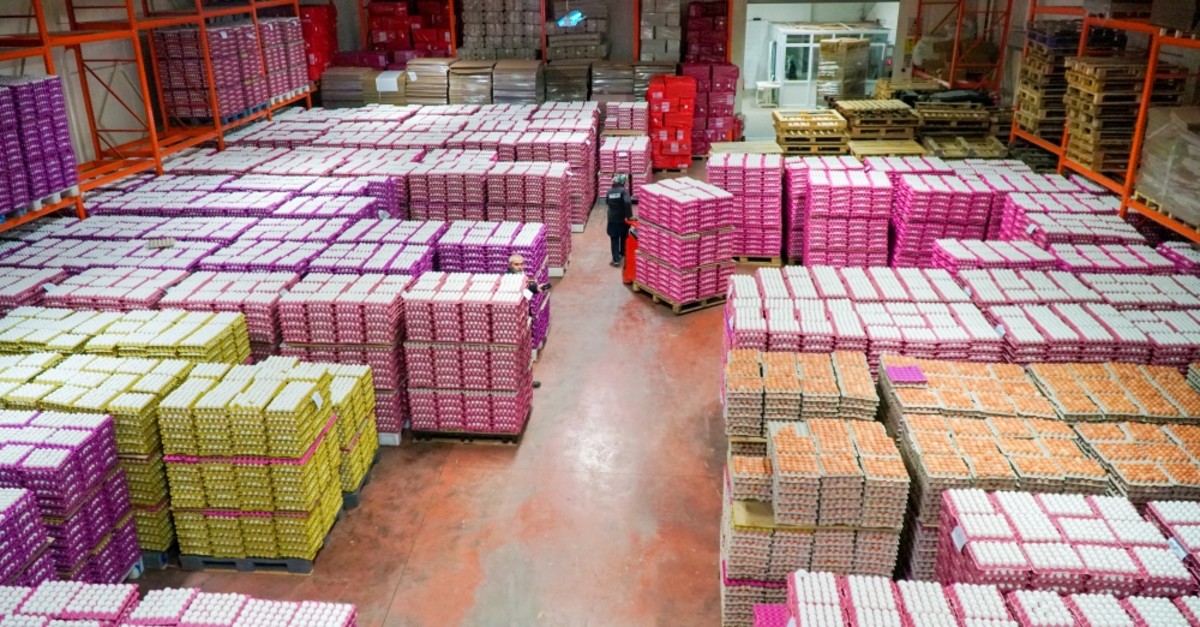 Baghdad's abrupt decision to prohibit imports of certain Turkish products, particularly eggs, has blindsided its own people who are now facing higher prices. Turkish egg producers, on the other hand, are being forced to deal with the situation after the doors to the largest market closed

Just as recent high-level bilateral visits between Turkey and Iraq were pointing to a major breakthrough in ties, a sudden decision has wrong-footed both the Iraqi people and the Turkish business community. Since the beginning of this year, the two major trade partners placed negotiations to remove trade barriers at the top of their agendas. Iraq, however, is gradually banning imports of certain food products from regional countries, including Turkey.

In May, it was eggs, in June, it was beverages and ice cream and soon came a prohibition on imports of table salt, noodle varieties and pasta.

Turkey's business community blames the decision, touted by Baghdad as an effort to boost domestic production, on political factors. Turkish exporters say that Iraq is currently not in a position to meet local demands for most of the aforementioned products.

Eggs, however, have turned into a major crisis since May. The move is said to have caught both Turkish exporters and Iraqi people on the wrong foot. Iraqi citizens are facing hikes on one of their sine qua non staple food products, while Turkish egg exporters are having to deal with the unwarranted situation of having the doors close to their largest market, which accounted for over 70% of their exports.

IRAQ NOT IN POSITION TO MEET LOCAL DEMAND

"The intention is not to protect the domestic production, it is political," İbrahim Afyon, chairman of the Turkish Egg Producers Association (YUM-BİR), told Daily Sabah.

Afyon said the situation could have been handled in other ways, through imposing taxes on imports for instance, as he finds the justification unrealistic since Iraq is not able to meet the local demand and production cannot be increased overnight.

"Iraq is able to meet only 15%-20% of the demand," he claimed, adding that the fact that there are not enough products in the market constantly leads to an increase in prices.

Several reports recently suggested that the price of a locally produced carton of eggs (30 eggs) in Iraq has increased from 3,500 Iraqi dinars ($3) to 5,000 Iraqi dinars compared to some 3,000 Iraqi dinars before the decision. Some reports also said the protest movement in Iraq was taken to social networks where campaigns called for a boycott of Iraqi eggs and for imports to start again.

"It is costing Iraqi people a lot. People are bearing the burden of increased prices," said Afyon. "We have heard of revolts. A box of 360 eggs normally bought for approximately $30 is now being purchased for nearly $60."

On the other hand, Turkish producers, who are used to exporting their surplus production, are now facing a fact that they cannot export it to their biggest market.

They have been forced to turn to the domestic market and supply greater amounts of eggs than earlier, Derya Pala, a YUM-BİR board member and press agent, told Daily Sabah.

The situation has led to an average price of up to TL 0.38 per egg before May in Turkey to drop down to some TL 0.26 nowadays, according to YUM-BİR.

"As a sector, we export our surplus production, and over 70% of these exports we make to Iraq. With the halt in exports, the surplus in the domestic market caused the price of eggs to fall rapidly due to the supply-demand balance. The producer is now able to sell his egg at only half of its cost, an egg which has a cost of TL 0.35-TL 0.36 has even dropped to TL 0.16-TL 0.17 at one point," Pala says.

"Producers had to cut their production because the situation is not sustainable," she indicated, stressing that if the process lasts long, it will be impossible to sustain egg production.

Pala also suggests that they look at the sudden decision as having a political basis and that they simply could not understand it, noting the fact that Iraqi people are now buying the products at higher prices.

Three months on, nothing has changed, Pala emphasized, indicating that they were in contact with the Trade Ministry and that they demand the situation to be solved through contacts between the two governments as soon as possible.

Also elaborating on the current situation, Turkey's Ambassador to Iraq Fatih Yıldız said the motive behind such a decision was explained to them as encouraging local production.

"Iraq cannot develop a production capacity enough to cover the gap in such a short term," Yıldız said.

"Therefore, it is clear that Iraq is currently open to imports. We will discuss this issue with Iraq's Ministry of Agriculture. We will ask them to tell us their concrete needs. There will be an improvement in this issue in the period ahead," Yıldız was cited as saying by Anadolu Agency (AA) on the sidelines of 11th Ambassadors Conference in the capital Ankara last week.

Turkey ranks 9th in the world with an annual production of some 22 billion units of eggs. The sector, which has a turnover of around TL 7 billion, is providing direct and indirect employment to some 150,000 people.

The sector managed to significantly raise its overseas sales over the last years and saw its highest exports of the last decade last year when its exports amounted to $430.7 million, according to data by the Aegean Exporters Association (EİB). The same amount was $290.4 million in 2016 and $376.7 million in 2017.

After investments made in recent years, Turkey now ranks third to the Netherlands and the U.S. in egg exports.

It exports 30% of its annual production, Pala says, adding that over 70% of these exports are being sold to Iraq. Roughly 250 trucks are said to have been entering Iraq through Habur gate on the Turkey-Iraq border each week before the ban in May.

Following the recent developments, Turkish egg producers have boosted their work in an effort to decrease their dependence on the Iraqi market and add new destinations to their exports.

YUM-BİR Chairman Afyon says they increased their exports to Gulf countries by some 10%, while also slightly entering the African market, where the sector earlier did not have any exports.

According to Afyon, Iraq will not be the same market for Turkish egg producers in the future, regardless of how the situation develops in the period ahead. "[The market] does not consist of Iraq only. We will explore new markets. We have other alternatives," he said.