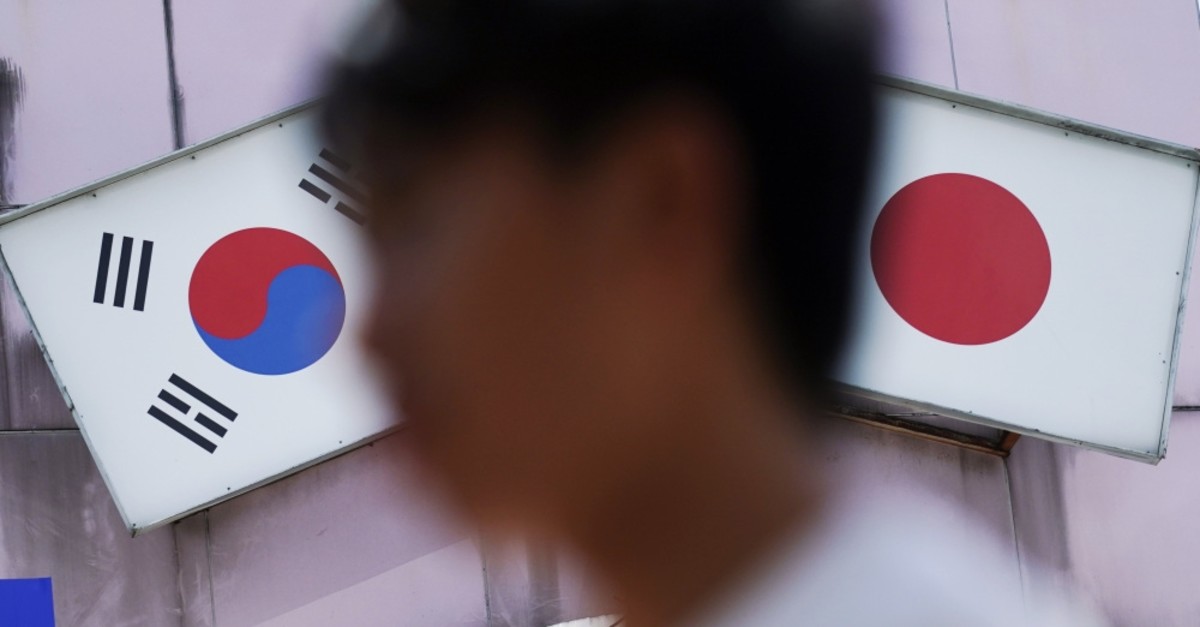 A man walks past an advertisement featuring Japanese and South Korean flags at a shop in the Shin Okubo area, known for Korean restaurants and stores selling K-pop merchandise, Tokyo, Aug. 13, 2019.
by Associated Press Aug 20, 2019 12:08 am

Journalists and academics in Seoul have been running out of colorful descriptions for an intensifying dispute between South Korea and Japan over history and trade that has sent always shaky relations plummeting further.

Tokyo's moves to impose trade curbs on Seoul have struck a nerve in South Korea, where many people still harbor resentment over Japan's brutal colonial rule from 1910 to 1945 and feelings that Japan hasn't atoned enough for its wartime past.

From Japan, there's annoyance about the perception that Seoul continuously keeps alive history issues that Tokyo, which has repeatedly expressed remorse for its wartime actions, says have been settled.

Despite recent conciliatory rhetoric from Seoul, difficult relations could continue as decades of mutual frustration over history come to a head. This deterioration in ties matters because the United States relies on its top Northeast Asian allies, and the tens of thousands of U.S. troops stationed there, as it confronts both North Korea and China.

Here's a look at the source of the troubles between Seoul and Tokyo:

South Korea's relations with Japan have never been great, but their interdependence in trade and vibrant exchanges of pop culture and tourism had softened political anger in past years.

Thousands of South Koreans have taken to the streets to protest Tokyo's move to tighten controls on exports to South Korea, where major manufacturers like Samsung heavily rely on materials and parts imported from Japan.

Sales of Japanese beer, clothes and other goods have declined sharply as have travels to Japan amid boycott campaigns. Some gas stations have refused to fuel Japanese cars. A restaurant and a museum put up signs that Japanese visitors weren't welcome. Busan City is considering tearing down a Korean War monument to U.N. soldiers following complaints that its flagpoles resemble Japan's wartime "rising sun" emblem, a claim critics say is bizarre.

Many South Koreans believe Japan's past expressions of regret lacked sincerity or were ruined by conservatives who've continued to play down or question Japan's wartime past. There's also frustration over a view that Japanese school books sugarcoat past brutalities.

Questions about Japan's sincerity were also raised over a 2015 agreement that the administration of conservative Japanese Prime Minister Shinzo Abe reached with Seoul's previous conservative government to send 1 billion yen to a foundation established to compensate South Korean women who were forced to work at Japan's World War II military brothels.

Many South Koreans saw it as Tokyo's attempt to buy the silence of victims. There's a "perception among South Koreans that Japan will try to solve everything with money without properly repenting its past," said Lee Shin-cheol, a historian at Seoul's Sungkyunkwan University. Weeks after angrily declaring that South Korea will "never again lose" to Japan, South Korean President Moon Jae-in on Thursday used the 74th anniversary of Japan's World War II surrender to extend an olive branch, saying Seoul will "gladly join hands" if Tokyo wants to talk.

Nevertheless, thousands of people later marched through heavy rain in Seoul, carrying signs that said "Apologize for War Crimes" and "We Denounce Abe."

"I lived like a slave there, but Abe is acting like he doesn't know," said Kim Jeong-ju, an 88-year-old who is seeking compensation for her forced labor at a Japanese munitions factory in 1945. "We ate all the grass in the dormitory because we were too hungry. We lost all of our hair." Japan, which has denied that its trade curbs were retaliation over the history row, claims all compensation issues were settled when the two countries normalized relations under a 1965 treaty. But South Korea's Supreme Court last year ruled that the deal did not cover individual rights to seek reparations.

"We have to ask ourselves whether our top strategic priority right now is winning a history war against Japan," Lee said. "It's not."

For decades Japan has struggled to face up to past atrocities and abuses, with some people saying that massacres were exaggerated or characterizing colonization as a positive act that helped Korea to modernize, according to Masaru Tonomura, a history professor at the University of Tokyo.

Many Japanese, he said, see themselves more as victims than perpetrators of imperialism and militarism.

Some of Japan's views on history could be seen recently when throngs of people flocked to Tokyo's Yasukuni Shrine to pay respect to war dead, some carrying the rising-sun flag and banners that said, "Banzai to the emperor." "It is shameful our prime minister can't be here," Hirotomi Igarashi, a construction company owner who heads a right-wing group, said, referring to how Abe has for years avoided Yasukuni on Aug. 15, the day of Japan's World War II surrender.

Abe, who counts heavily on the support of conservative Japanese, has sent gifts instead. "It's because China and Korea won't stop screaming."

Yasuhiro Yagi, the leader of a small anti-Korea group, believes that accounts of Japan's cruelty during World War II were fabricated. He sees Korean women who were made sex slaves during the war as victims of criminals, not of something the government did.

Japanese leaders, officials and emperors have issued apologies for the war. In 1995, Prime Minister Tomiichi Murayama issued a statement that vowed to never repeat the mistakes of war. Earlier statements by government spokesmen Koichi Kato and Yohei Kono acknowledged military involvement in the sex slaves system. But some say they didn't go far enough. When Abe, a grandson of former Prime Minister Nobusuke Kishi, who served on wartime leader Hideki Tojo's Cabinet, issued an apology in 2015, he made it clear that such expressions shouldn't extend to future generations, saying, "We must not let our children, grandchildren, and even further generations to come, who have nothing to do with that war, be predestined to apologize."

Some Japanese are opposed to Abe's policies and think Japan should work harder to patch up relations with South Korea. Dozens of people protested outside the prime minister's residence earlier this month to urge Tokyo to reverse the downgrading of South Korea's trade status and to better apologize for wartime atrocities. But the protesters, who included members of Christian groups, activists and labor unionists, are seen as fringe by many in Japan. In Tokyo's Shin Okubo district, which bustles with Korean restaurants and stores selling K-pop merchandise, Nagisa Sato, 25, said she comes to the area about once a week because she loves spicy food and South Korean movies and music. "The people are so kind," she said of her experience during a visit to South Korea. "What you see on TV isn't all there is."