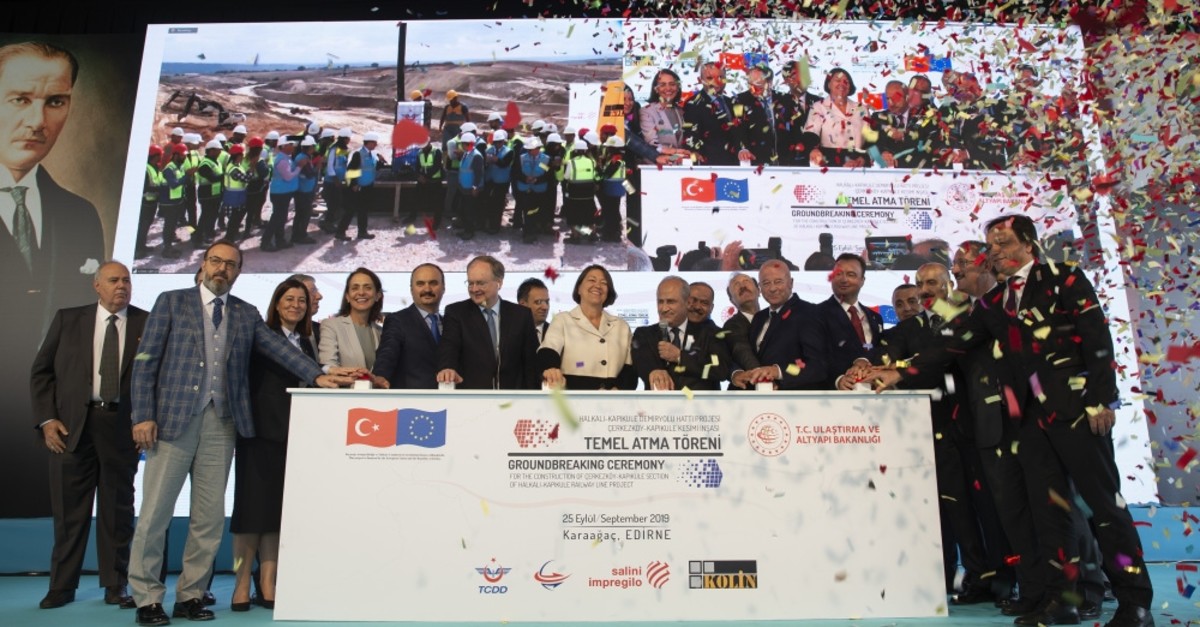 The railway project from Istanbul to the Bulgarian border, a part of which will be built with the support of the EU, promises to further enhance ties between Turkey and the bloc and create major commercial mobility for all parties

The Halkalı-Kapıkule railway project symbolizes Turkey's connection to the EU geographically with its route spanning between Istanbul and the border with Bulgaria, as well as with its budget size and technical characteristics, according to Transport and Infrastructure Minister Cahit Turhan. The minister also said the project will further strengthen relations with the bloc. Turhan's remarks came at the groundbreaking ceremony of the railway project in the northwestern city of Edirne, which borders Bulgaria. Turkey and the European Union in June inked an agreement on the construction of the Çerkezköy-Kapıkule section of the Halkalı-Kapıkule railway project.

The project financing agreement for the Halkalı-Kapıkule high-speed train line project, the largest-ever EU-Turkey financial assistance project, was signed in February on the sidelines of the third Turkey-EU High Level Economic Dialogue.

The total project investment cost is estimated at around 1 billion euros ($1.1 billion). The EU will provide 275 million euros in grants, making it the single-largest EU investment project carried out in Turkey.

In his address yesterday, Turhan noted that Turkey carries out more than 50% of its exports to Europe.

He emphasized that more than 67% of direct investments to Turkey come from Europe and Turkish producers are an important part of the production and supply chain for Europe.

Indicating that it is possible to move all this higher, Turhan said that this can only be achieved with a fair and stable approach. "Moreover, the turmoil that the world has been experiencing makes it necessary for the EU to act together with Turkey further," he added.

THE BELT AND ROAD INITIATIVE

The minister suggested that the railway line, the foundation of which was laid yesterday, will further strengthen relations with the EU.

Turhan indicated that with the introduction of Halkalı-Kapıkule railway line into service, the final phase of high-quality connection to Trans-European Transport Network (TEN-T) will be completed.

The Halkalı-Kapıkule railway line will connect the EU, Turkey and Asia in accordance with TEN-T corridors. The project is also important for its budget size and technical specifications.

The whole project consists of three sections: Halkalı-Ispartakule, Ispartakule-Çerkezköy and Çerkezköy-Kapıkule. While the construction of the 155-kilometer Çerkezköy-Kapıkule section will be jointly financed by the EU and Turkey, the construction of other 76-kilometer section will be simultaneously carried out by the Turkish State Railway (TCDD) through the national budget.

The new link will provide a safe, high-speed and clean connection for freight and passengers between the Halkalı station of Istanbul and the Bulgarian border crossing point at Kapıkule/Svilengrad station. The double-track electrified line will have a 200-kilometer-per-hour design speed, enjoying the latest state-of-the-art signaling systems compatible with EU standards.

It is estimated that once built, the railway will create major benefits for both consumers and producers of up to 1.6 billion euros. Businesses will enjoy more economical and reliable transport services, decreasing the barriers in a corridor of high importance for international import and export activities. Citizens will experience more accessibility and safer mobility, particularly in and around Istanbul's urban areas, while carbon emissions will decrease and the use of different modes of transport will be promoted, according to the EU delegation to Turkey.

Minister Turhan emphasized that Turkey's position connecting Europe to Asia and the Far East, and its position on the focus of trade routes between Europe and Africa for the growing Asian economies makes the construction of this line much more important.

"It is also significant that the line will contribute to the Belt and Road Initiative (BRI), which aims to connect China, Asia, Europe and the Middle East to create a huge infrastructure and transport network," the minister said, adding that, in order to actualize "The Middle Corridor" which Turkey calls the "Modern Silk Road," Turkey has carried out major works on the east-west and north-south axis in the recent period. "Therefore, we have approached the implementation of the Iron Silk Road spanning from London to Beijing as a strategic issue from the very beginning. With the Marmaray and Baku-Tbilisi-Kars Railway line that we opened for service, we have very clearly demonstrated our support for and belief in this project," he noted.

Underlining that the project, for which Turkey, in cooperation with the EU, has made efforts for a long time, Turhan said, "As both Turkey and the EU, a considerable amount of time and efforts have been spent at all levels. Since commercial mobility for all the parties will reach a serious extent with the introduction of the line, everyone will win."

The workforce that will be needed during the construction works, which will last approximately four years will be supplied from the region itself, the minister concluded.