Turkish firms leave their mark on The Big 5 Construct Qatar 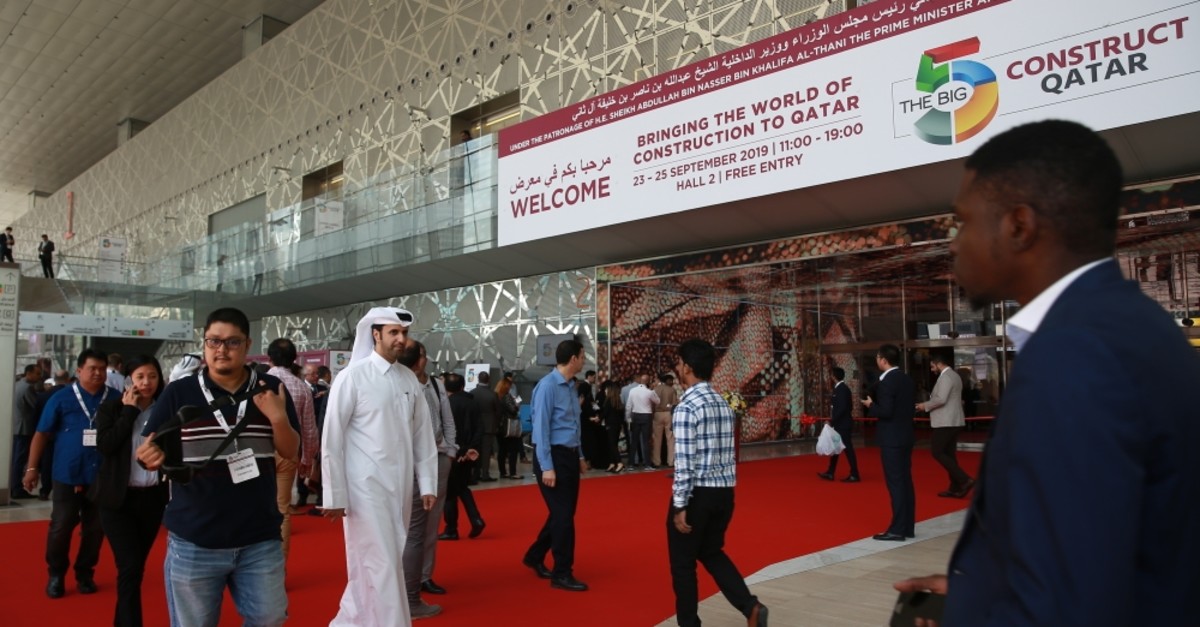 Turkish construction companies have so far taken part in a number of megaprojects in Qatar, including high-rises, stadiums, highways and airports.
by Sinan Öztürk Oct 02, 2019 12:33 am

Turkish construction companies had a strong presence at The Big 5 Construct Qatar, eyeing to use domestic and international turbulence to their advantage

More than 30 companies from Turkey met local, regional and international players involved in the Qatari construction sector and followed recent trends and issues at The Big 5 Construct Qatar, which opened its doors for a second time between Sept. 23 and Sept. 25. Held at the Doha Exhibition and Convention Center (DECC) located right in the middle of the capital's West Bay financial area, this year's exhibition welcomed more than 150 exhibitors from 20 countries. Exhibitors, customers and sector professionals also had the chance to attend some 40 free workshops, panels and education sessions in the exhibition organized by dmg events Doha. For a second time, Turkey was an exhibiting country at The Big 5 Construct Qatar. The country's trade volume with Qatar increased by 70% year-on-year since the blockade imposed on Qatar by its Gulf neighbors in 2017.

Burak Güreşçi, Turkish commercial counselor at the Embassy of Doha, explained that Turkish exports to Qatar increased from $450 million $1.1 billion in 2018, and current trends show year-end figures for 2019 somewhere between $1.3 billion to $1.4 billion. These numbers can increase rapidly once the Economic Cooperation Agreement — signed on Nov. 26, 2018 at the Turkey-Qatar Fourth High Level Strategic Committee Meeting attended by President Recep Tayyip Erdoğan and Qatari Emir Sheikh Tamim bin Hamad Al Thani — is ratified, Güreşçi explained, noting that information technology (IT) and defense are also among the key sectors in which trade ties are growing between the two countries.

Turkish construction giants have had a strong presence in Qatar for a long time, taking part in megaprojects like high-rises, stadiums, highways or airports, therefore it is no surprise that the sector has a significant share in total exports to Qatar. The $282 million volume of the construction sector is expected to double this year, Kılınç Yetkiner, the group manager for Expotim/Ladin representing the Turkish companies at The Big 5 Construct Qatar, explained.

"The state of Qatar refers government institutions or private companies to Turkey for tenders whereas public institutions take Turkish firms faster to their vendor lists," Güreşçi said, describing it as a "psychological advantage" for Turkish companies. Güreşçi added that Turkey participates in fairs in Qatar such as The Big 5 Construct at the national level and the ministry of commerce provides firms with market research opportunities.

"There is no visa between Qatar and Turkey, no time zone difference, we have good political relations and the people are sympathetic toward Turkey," Güreşçi said, advising Turkish firms to either find solid local partners in Qatar or to establish strong brand recognition in their respective areas before aiming for the market. He also advised firms to register in the Public Works Authority's (Ashghal) vendor reference list as a must to make meaningful business in Qatar.

Turkish suppliers, which have long penetrated into the Qatari market projects that have been awarded to Turkish contractors, now eye making a name for themselves both in the country and the region, and The Big 5 Construct Qatar provides an important opportunity to do just that.

Artstone, an Istanbul-based firm producing decorative wall panels, is among those firms. Since 2017, the number of their customers in Qatar has been increasing incrementally. Exports constitute nearly 35% of total sales but Qatar has already climbed to 10%, Bilal Emre Türkgeldi, the company's managing director, explained. He says product availability and timely deliveries are of key importance for the Qatari market especially ahead of the 2022 World Cup, and Turkish firms currently have an advantage regarding this feature along with quality.

For two companies that have long made shipments to Qatar inside larger projects and conducted sales to Qatari customers in their respective showrooms in Istanbul — sanitary ware producer Armadi Art and bronze ware producer Vista d'Oro — The Big 5 Construct Qatar is a step to increase their brand recognition ahead of the opening of their joint showroom in Doha.

The Big 5 Construct Qatar is very efficient in the sense that most participants were end users, Export Manager Mehmet Atay from Yıldırım Cooling, a back-to-back exhibitor firm that exports 70% of all its products, said.

For a small and medium-sized enterprise (SME) looking for alternatives as the domestic market has been rescaling, Qatar provides opportunities on the FIFA World Cup level. Eren Boz, the owner of CTU that offers a wide range of construction tools, says one of their products outperformed a Swiss giant's product and is currently being used in Lusail Iconic Stadium, an 86,000-seat venue that will host Qatar 2022's opening and closing matches.

Following their attendance to The Big 5 Construct Dubai, it was The Big 5 Construct Qatar's first edition that brought the CTU to this booming market, which has quickly climbed the ranks as their largest export destination with more than half of all their exports, despite connections in significant economies like Germany, the U.K. or Egypt.

Boz explains that the diplomatic crisis among the Gulf Cooperation Council (GCC) countries was a key factor in their decision to take part in the event, along with its reputation in the construction sector. The exhibition was also helpful for the company to determine what products are being sought by their potential customers, helping them shift their focus there. It that sense, it is indeed valuable for SMEs, Boz says, also citing serious support and consulting provided by the Ministry of Trade.

"The biggest difference of Qatari buyers and wholesale traders is that they know what they are looking for very well and they are very focused on details," Boz says, also pointing out the strength of their local partner ICS along with their own efforts to win the trust of their Qatari customers, which included some 15 trips to Qatar that featured on-site training and demonstrations.

Ideal, an Istanbul-based firm primarily producing laminate products such as toilet cabins or separators, is currently on the verge of being another World Cup supplier with a prospective sale to be used in Al-Thumama Stadium located on the southern outskirts of Doha, and they already have another stadium project in their sights. Deputy General Manager Savaş Topal, who is in charge of the company's sales and exports, said the company has made it to the vendor list and they are currently providing samples, saying this progress owes to their participation in last year's The Big 5 Qatar Construct Qatar, where they were spotted by one of the contractors of the project.

Exports to Qatar already make up 10% of all their exports and Topal said it could rise to 20%, he explained, saying the share of exports in the company's total sales has risen from 30% to 50% in the last couple of years due to the decrease in demand in the domestic market. He advised firms to spare a regular budget for fairs and exhibitions, along with regular attendance at such events.

There is no doubt Qatar 2022 is the talk of the town in Doha, both for football fans and the business community alike. Apart from five ongoing stadium constructions that will serve as World Cup venues, both the capital and the rest of the country is also undergoing a rapid overhaul of infrastructure, building new highways, metro lines and accommodation options while providing significant deals for companies and thousands of jobs. However, there are also various projects looking beyond 2022, and we wanted you to take a closer look at two significant ones:

A planned city project covering a giant 38-square-kilometer area near Doha, Lusail City is perhaps the cream of the crop of all projects in Qatar as the country puts it in the global spotlight by holding the World Cup opening match and the final at the 86,000-seat Lusail Iconic Stadium, which will be the largest in Asia when completed.

The project developed by Qatar Investment Authority's real estate developer Qatari Diar is located just north of the West Bay area, where the University of Qatar and the famous The Pearl-Qatar and Katara Cultural Village projects are also located.

Lusail City spans through a 27-kilometer coastline divided by two "wadis," shallow seabed filled with water during high tide. Development Director Hamad Ali Alabdulmalik explained that the natural course of the seafront and the wadis largely shaped the project as their preservation was among key priorities.

It is planned that 270,000 people will live in Lusail City when fully completed, along with 170,000 employees for commercial areas. A 38.5-kilometer light rail transit (LRT) system including 35 stations will serve Lusail, along with public buses, water taxis, park and ride areas and a 76-kilometer extensive cycling and pedestrian network separated from road traffic. The infrastructure, currently standing at a completion level of 90%, includes significant features such as district cooling systems — saving 1 million tons of CO2 per year — pneumatic waste collection, 20,000 monitoring devices and even a storm water drainage network.

Msheireb Downtown Doha covers an area of 310,000 square meters located right in the heart of Doha, replacing an old neighborhood with 100 low-rise buildings featuring designs inspired from Qatar's culture and traditions. The project area is in walking distance to the Amiri Diwan – the seat of Qatari emirs — and most ministries, the historic Souq Waqif bazaar, the Corniche waterfront, and Doha's landmark Museum of Islamic Arts and Qatar National Museum. Nearly 90% of the project has been completed.

What makes this mixed-use city unique is that it is among the few redevelopment projects in the Middle East that puts walking and cycling to the forefront with a design minding shading in Qatar's desert climate, reduced car traffic crossing the district and an extensive underground parking system to also be used for deliveries and charging stations and using trams for internal transportation.

The project features a battery-powered tram circulating its streets and walkways, while the adjacent Msheireb Station will be served by three of four lines of Doha's metro system currently under construction.

Putting smart and environment-friendly practices to its core, Msheireb Downtown Doha is also unique in the region for public open space use and street life featuring four plazas and open-air restaurants. The project includes four museums reflecting the old Msheireb area and it also has cultural offerings available on Msheireb Museums, in addition to four hotels occupied by leading brands.