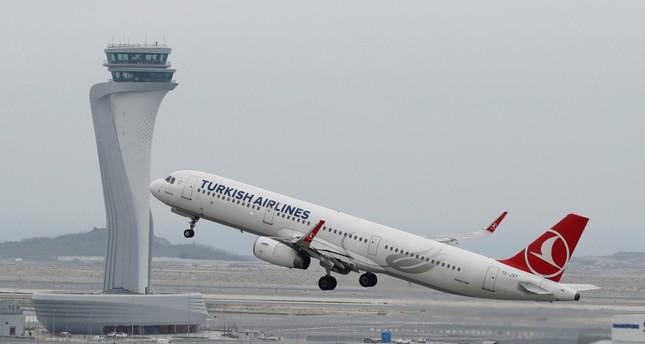 Flagship carrier Turkish Airlines recycled more than 100 tons of waste by participating in the zero waste project; it is one of the biggest companies to take up the landmark recycling initiative

Turkey’s leading carrier Turkish Airlines (THY) now leads Turkish corporations in recycling efforts. Integrated into the revolutionary zero waste project initiated by first lady Emine Erdoğan, THY managed to recycle 100 tons of waste in one year.
The company and its subsidiaries are involved in recycling everything from fuel to food from waste oil to toys. Its efforts have lifted THY to the top spot among international carriers turning to recycling in recent years. In one year, it managed to separate 71 tons of glass waste which equals approximately 86 tons of raw glass material and saved 29 tons of plastic, equivalent of 474 barrels of oil. It also saved 1,274 tons of paper waste that roughly equals to 21,668 trees. With recycling of hazardous waste, it saved a land size of 35 football fields and for non-hazardous waste, it saved enough to save 1,035 trees from imminent death for the sake of the paper industry. Collecting waste oil, it saved water amounting to 704 big swimming pools.
THY collects waste from plastic to glass and paper separately in flights. In 22 domestic and 46 outgoing flights, the carrier managed to collect 1,225 tons of paper, 30 tons of plastic and 68 tons of glass waste, saving 8,402 kilowatts of energy and curbing emissions of 233 tons of greenhouse gases.
The carrier tries to save and recycle everything it can, including batteries. Around 75,000 batteries were collected in one year while 61 tons of scrap iron/steel were saved.
Starting on Monday, the carrier will remove traditional garbage bins from all its offices and replace them with separate bins to separate waste at its source. THY’s goal is to reduce hazardous waste by 10% by the end of the year and receive a golden certificate for its General Directorate offices and offices in Istanbul’s Yenibosna and Halkalı districts, a prestigious certificate given to companies that successfully implement the zero-waste policy.
Turkish Airlines also managed to keep its zero waste policy intact while moving to the new Istanbul Airport in 2018. After the “great migration” of carriers from Atatürk to Istanbul Airport, Turkish Airlines managed to save and recycle 30 kilograms of paper cartons, 18.8 kilograms of plastic wrappings, 470 kilograms of metal waste and 480 kilograms of other types of waste. THY Chairman İlker Aycı says Turkish Airlines is the flagship carrier of Turkey and flies to the most international destinations in the world. “Our destinations cover a rich geography and we have to take steps for sustainability so that unique beauties of the world we take our passengers to would not lose its sparkle. We show our respect to nature both in the air and in our ground operations,” he said.
The zero waste project which THY adopted was launched in 2017 with collaboration between first lady Emine Erdoğan and the Ministry of Environment and Urbanization. It has been one of the most successful projects to be adopted widely across Turkey and every public institution and a large number of companies soon joined the efforts, separating waste and recycling it while the government launched awareness campaigns to promote the effort.
In Istanbul, where THY and other large corporations are based, the zero waste project managed to recycle 260 tons of plastic waste. Istanbul has one of the highest rates of waste production as it remains the country’s most populated city with a population of over 15 million people tucked into two small stretches of land divided by a waterway. Istanbul produces an average of 17,000 tons of domestic waste every day, out of which 6,000 tons are processed in the municipality’s garbage collection and recycling centers.
Last Update: Dec 20, 2019 1:02 am
RELATED TOPICS