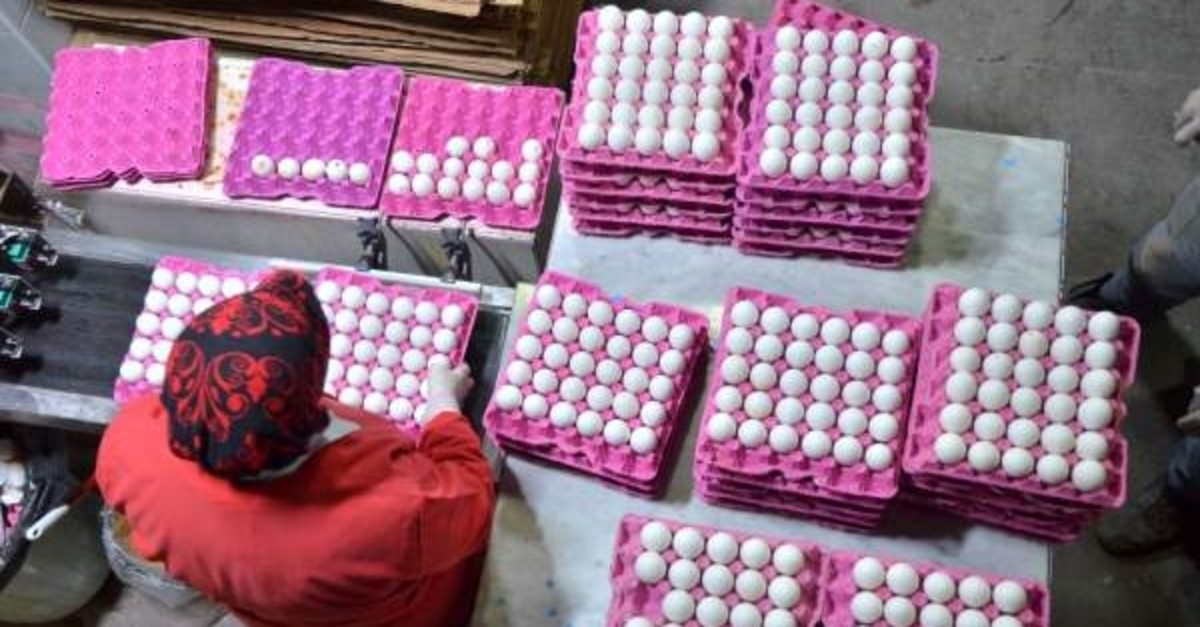 Turkey's total egg exports last year totaled over $430 million. (AA Photo).
by Daily Sabah with AA Oct 14, 2019 1:14 am
The first shipment of eggs was dispatched to the U.S., a market which Turkish egg exporters have been eyeing for a long time, via air cargo.
As soon as the products sent as samples pass the necessary tests, 10 containers are expected for delivery to U.S. buyers.
Bedri Girit, the chairman of the Aegean Fisheries and Animal Products Exporters' Association, told Anadolu Agency (AA) yesterday that the most important market in the sector, Iraq, has been experiencing difficulties in the recent period, although exports continue.
Girit stated that a slight decline has resulted in an export surplus and a decrease in prices, stressing they are focused on developing alternative markets in this regard.
Bedri Girit also noted that they are carrying out promotional and marketing activities to the farthest points in the world to eliminate the dependence on a single export market. "In this context, good news came from the U.S. They said they could buy eggs from us. For the last three months, we have been dealing with this issue intensively," Girit continued.
"We had previously had a health certificate protocol problem with the U.S., but this was taken care of. We do not have a problem with U.S. standards. One of the main factors in the U.S. choice of Turkey is that we are in a very good position in the egg sector in the world. They included us in their plans because we had no problem in terms of quality and service."
Girit stressed that the U.S. is one of the world's largest egg producers, but they are looking for partner producers against possible risks. "There are many external factors in the livestock sector. The climate decides what will be raised where. Because of these natural factors, sometimes you cannot produce at the level you desire," he said.
"The U.S. realized that there could be a risk here and sought a partner for table eggs. In this sense, they preferred us, which is an indication that our egg industry is of good quality. It is not easy at all to pass food security in the U.S. and to actually meet their standards."
As of the beginning of this year, the Iraqi government gradually banned imports of certain products from regional countries, including Turkey. These included eggs, poultry, meat, beverages, ice cream, table salt, noodle varieties and pasta.
Eggs have become a major crisis issue ever since the ban went into effect. Sector representatives previously told Daily Sabah that Turkey exports 30% of its annual production, adding that over 70% of these exports went to Iraq.
Exports to Iraq amounted to nearly $306.45 million in 2018, according to Turkish Egg Producers Association (YUM-BİR) data, or 71% of Turkey's total egg exports. Turkey’s total egg exports last year were worth over $430 million.
Last Update: Dec 20, 2019 1:03 am
RELATED TOPICS