Entrepreneurs set sail from Istanbul to grow in overseas markets 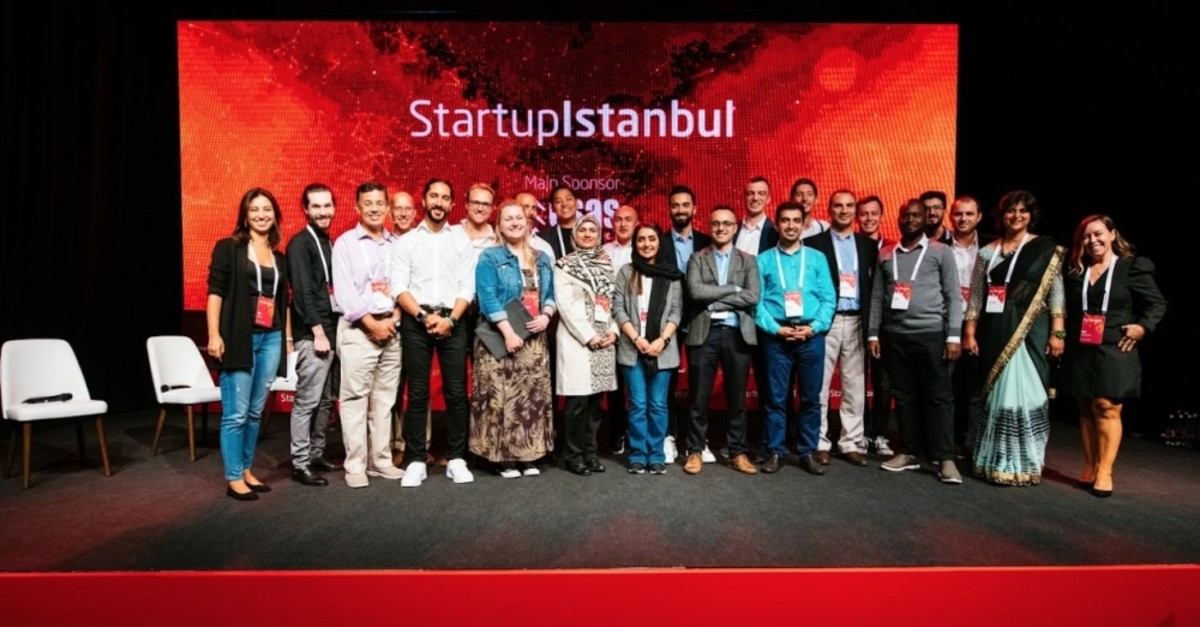 The winners of Startup Istanbul 2019 have been announced. The weDeliver team came first in the startup category, while Alotech won the scaleup finals, participate by growth-oriented startups.

The event, which was dubbed one of the top 10 events in the global startup scene by the Global Accelerator Report, looks to make Istanbul and Turkey important locations in the entrepreneurial ecosystem.
Startup Istanbul 2019 was organized for the seventh time by Etohum. Apart from other programs it analyzed for the first time, startups in the growth phase, something Turkey badly needs.
In that context, juries selected the winners of Scaleup Istanbul, where growth-oriented startups whose income exceeds $1 million or have received at least $1 million investment competed.
According to the Turkish startup ecosystem intelligence firm, Startups.Watch, the total investments made in 43 startups in the first nine months of 2019 amounted to $13.9 million.
Compared to the previous years, the number of growth-oriented enterprises was not high, which led to a decrease in investment figures. There are now platforms that support the launch of not just the seed stage but also full ventures and their opening to global markets.

The 7th Startup Istanbul, sponsored by Esas Ventures, hosted some 100 entrepreneurs, selected from among 160,000 applications from around the world. They had the opportunity to make presentations before the world's leading investors and institutions.
This year's top prize went to Palestine's weDeliver, which provides crowd-funded B2B transportation services. While Saudi Arabia's OrbitCrops, which operates in the agricultural sector and increases the productivity of farmers, took the second prize. Kenya's Fleetsimplify, which measures the performance and profitability of companies operating in the transport sector, came third in the competition.

In the Scaleup Finals, organized for the first time this year, companies with an annual income exceeding $1 million or firms that have received more than $1 million investments so far were eligible to participate.
The third place was shared by Greek startup Welcome, which provides an easy, personalized travel experience, and Pakistan's Oladoc, a doctor's appointment platform. The second place went to Jordanian mobile game publisher Tamatem.
The winner of Scaleup Istanbul was Turkish AloTech, which provides cloud-based call center services to corporations. The Startup Estonia special award, on the other hand, went to Turkish Neurocess that developed "internet of things" (IoT) device and services that predicts athlete injuries.

Startups from over 65 countries meet in Istanbul

Inaugurated by Burak Büyükdemir, ETohum's Startup Istanbul event continues to grow and expand its scope without any public support. “Today, 7th Startup Istanbul hosted entrepreneurs from more than 65 countries,” Büyükdemir said.
“Once again, we have taken important steps in making Istanbul one of the world's most important entrepreneurship events location. Every year we continue to make Istanbul a bigger part of the global entrepreneurial ecosystem,” he said.
Bridge between ecosystems essential

Fethi Sabancı Kamışlı, a founding partner at Esas Ventures, recalled the founding of the company. "We aim to build a bridge between the Turkish and global ecosystems. To do so, we have invested in many different geographies. The important thing here is to know that investing is not enough,” Kamışlı said, adding that “you need to visit these companies and see what is physically happening there. Otherwise, there is no possibility of adding value to these companies. We want to be a part of these stories by creating sustainable value.”

"Kamışlı said being here is not enough to build bridges between the different ecosystems. Traveling to other regions is also important. We need to understand what is going on there and bring it back here and blend it because this is no longer a regional game,” he said. “Network development plays a key role here. That is why Startup Istanbul is so important. Esas Ventures will continue supporting it.”

With the world's smallest wireless vibration sensor, Sensemore monitors machine tracks with intelligent technologies, enabling improvements to be made at the right time and reducing maintenance costs, thus making sure measures are taken before the malfunction occurs.

Smart sensors and the IoT technology are at the heart of the Industry 4.0 transformation. It is exciting to witness the efforts of Turkish startups to gain power in the global market.
Currently preparing to open its European office, Sensemore also looks to expand to the U.S. soon. It manufactures "the smallest wireless vibration sensor in its class."
Founder Çağlar Aksu said Sensemore received investments from Proline Ventures, a concern of the Turkish technology company Proline, to support startups working in the smart cities field.
It is currently working with different companies in the automotive, aerospace, machine manufacturing, robotics and white goods sectors. Aksu said their sensors, which they have been working on since 2016, enable vibration measurement that previously required very expensive equipment and a long time.

Aksu said the vibration sensor is very easy to use. “Normally, companies need to buy a sensor and extract a cable from the sensor, connect this cable to the so-called logic analyzer and then to the recorder. In our case, it is enough to connect Sensemore to the mobile phone via Bluetooth,” Aksu said.
“Furthermore, for the first time, third-party software can be integrated directly with the vibration sensor thanks to our API. It is also possible to share vibration records via popular applications like WhatsApp.”

Aksu said there were three stages of the system, namely research, quality control and predictive maintenance. He added that these three service lines come together and ensure that machines can be traced throughout their lifetime, making factories smarter.
“In the research and development (R&D) studies, we take measurements quickly and easily, ensuring that the measurement can be collected even in the most challenging environments. Sensemore can measure vibration even underwater. It can also measure in pressurized and closed containers,” Aksu noted.
“In the Quality Control phase, we create a company-specific quality control process and apply it to the production line, thus reducing the amount of faulty production and enabling companies to increase customer satisfaction. Under Predictive Maintenance, companies can monitor machine health on the production line with continuous measurements. In this way, problems can be solved before they occur, and production costs are reduced.”

Smart screen for farmers with İmeceMobil

With the İmeceMobil application, farmers can instantly follow the wholesale market, stock market and feed-milk prices, as well as frost, rain, weather and humidity forecasts in their region on their smartphones.

Farmers can use the free İmeceMobil app to check and record information related to fields, gardens and animal husbandry, as well as weather forecast reports. Farmers can receive warnings about accidental weather events such as frost, hail, lightning, storm and heavy rainfall. They can also talk to agricultural engineers and veterinarians at any time about crop production and animal husbandry.

Within the scope of the application, developed by İş Bank's technology startup Softtech, farmers can learn the latest wholesale market/stock prices of agricultural products, feed, meat, milk, and egg prices and access various news on agriculture.

Farmers can also be notified about İşbank's campaigns for the procurement of agricultural inputs in their regions, while İmece Cardholders can easily access their card information via the "İmece Kart'ım" option.

Each country is working to attract successful startups. The United Kingdom is one of the most active countries in this regard. The U.K. Department of International Trade (DIT), which opens the doors to the most successful and innovative entrepreneurs from Turkey, organized the GREAT Entrepreneur Games Turkey competition. Otsimo, Bluedot and Phoenix Energy won the competition by attracting the highest virtual investment.
"GREAT Entrepreneur Games" first started at the London Olympics in 2012, then spread around the world in different versions in Singapore, Australia, Chile, Argentina, Mexico and Poland, before coming to Turkey.

The British Consul General and Southern Europe and Central Asia Trade Commissioner Judith Slater said in her keynote delivery that they are delighted that a growing number of Turkish investors are striving to achieve their global goals through strategic investments in the U.K., particularly in the technology sector.
“The U.K. is one of the most exciting technology centers in the world and is also attractive for technology companies,” she said. “The number of digital technology companies born in the U.K. in the last 20 years has been booming.
Besides, according to 2018 data, U.K. technology companies attracted venture capital investment of more than 6.3 billion pounds ($8.1 billion). As you can see from these data, the U.K. is an excellent investment destination, and our investment team in Turkey has prepared to talk about how we can help you with your future investment plans.”

In the event, designed by DIT's Global Entrepreneur Program (GEP), 50 startups selected by the jury among nearly 200 applicants competed. During the full-day event, entrepreneurs and investors came together at the Consulate General of the U.K. in Istanbul to compete to attract investors' interest through a mobile application designed specifically for the event.
Both entrepreneurs and investors were allocated a virtual balance of 1 million pounds on the application. On the day of the game, the entrepreneurs tried to collect investments by making short and effective presentations to investors and other ventures in free format. At the end of the day, Otsimo, Bludeot and Phoenix Energy, the top three entrepreneurs who received the highest virtual investment, won the competition.

These three startups will be awarded a three-day training trip to London as the prize for winning the competition. There, they will be mentored by GEP business developers and brought together with potential business partners to achieve their goals of growth. That way, the Turkish startups will have the opportunity to grow their business in the U.K., become part of an international network and connect with the entrepreneurial ecosystem.