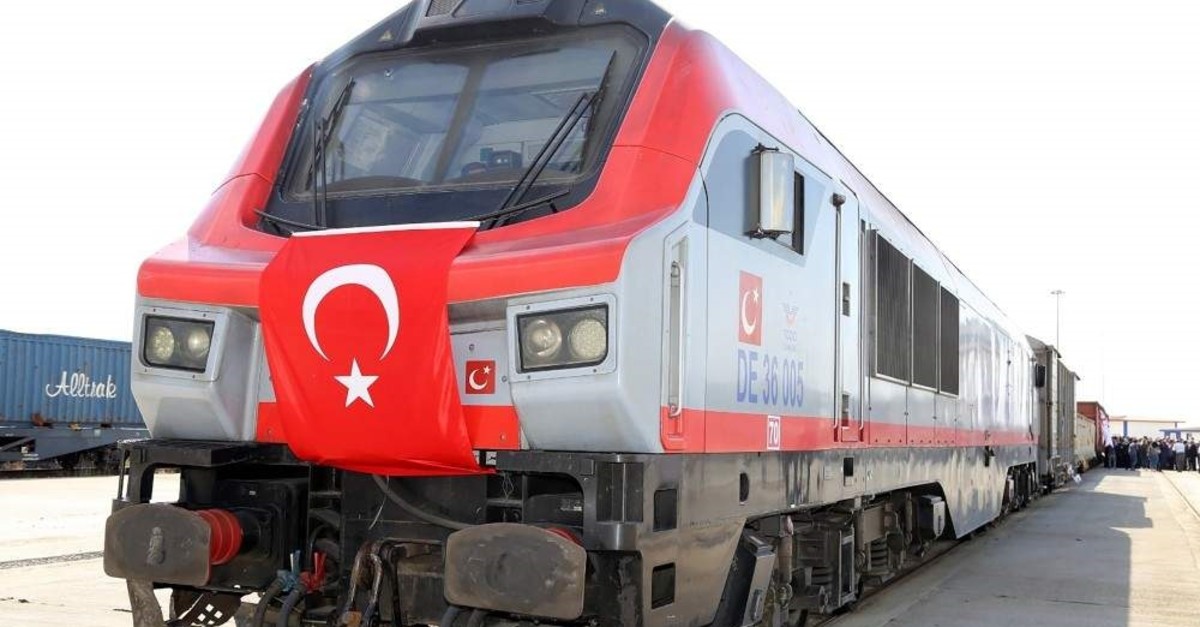 Providing the shortest rail link between Europe and Asia, the BTK railway link is aiming to carry 3 million tons of freight in the medium-term and some 6.5 million tons in the long-term, Transportation and Infrastructure Minister Turhan said

The railway line connecting Turkey, Azerbaijan and Georgia, establishing a freight and passenger link between Europe and China, has carried 275,000 tons of freight since it was launched in October 2017, Turkey’s transport and infrastructure minister said.

Cahit Turhan’s remarks come on the occasion of the second anniversary of the inauguration of the Baku-Tbilisi-Kars (BTK) railway line, which was launched by President Recep Tayyip Erdoğan, his Azerbaijani counterpart İlham Aliyev and then-Georgian Prime Minister Giorgi Kvirikashvili in Alyat, Azerbaijan.

Providing the shortest rail link between Europe and Asia, BTK plays an important role in the implementation of China’s Belt and Road Initiative (BRI) and the North-South Transport Corridor.

The line has made the axis of Europe, Central Asia, China and the Middle East the most economical, safest and most convenient route, Turhan told Anadolu Agency (AA) yesterday.

He stressed that the transportation between Kazakhstan and Turkey over the BTK railway line at a distance of 4,700 kilometers is completed in 180 hours depending on the situation of the Caspian Sea.

Three trains are operated weekly on the Turkey-Azerbaijan-Kazakhstan line, Turhan said, noting that construction materials, iron ore, soda ash, foodstuffs, cleaning products, agricultural products, fresh vegetables and fruits are sent from Turkey to abroad via the line, while grain, steel, zinc, fertilizer, chemical products and feed are being transported to Turkey from these countries.
AIM TO INCREASE EXPORTS

The minister further stated that TCDD Transport Inc. and Kazakhstan KTZ Express Inc. signed a container agency agreement in order to increase export transport to Kazakhstan via the BTK line.

“The customs procedures of goods transported on the BTK line are reduced from 24 hours to 10 to 15 minutes with the ‘Weighted Simplified Procedure,’ which sets an example for other countries.

Turhan highlighted that a new north-south corridor was created from Russia by rail transports initiated on the line. “Regular steel coils transport to İskenderun also began from this corridor,” he continued. “With the Memorandum of Understanding on Cooperation on the BTK Railway Route signed between Azerbaijan, Russia and Turkey, the aim is to transport 1 million tons of coal, grain and metal in the short term and 3 million to 5 million tons in the short term by rail via Russia.”

Turhan stressed block container train services between China and Turkey are run once a week. “The most important development for this purpose was that the first China-European train, which consists of 42 cars/containers carrying electronic components, set out on the Iron Silk Road,” he said. “The train arriving in our country on Thursday will mark two firsts at the same time. While it is the first train from China to Europe via the middle corridor Iron Silk Road, it is also the first international freight train to pass through the Marmaray tube passage.”

The goal is to carry 3 million tons of freight in the medium-term and 6.5 million tons in the long-term via the Baku-Tbilisi-Kars Railway Line, Turhan said, highlighting that Turkey, which intends to take a share of the increasing potential between Europe and Asia in the globalized world where the production center has shifted to the Far East, has become a notable international rail corridor.