First freight train from China to Europe to pass through Marmaray on Nov. 6 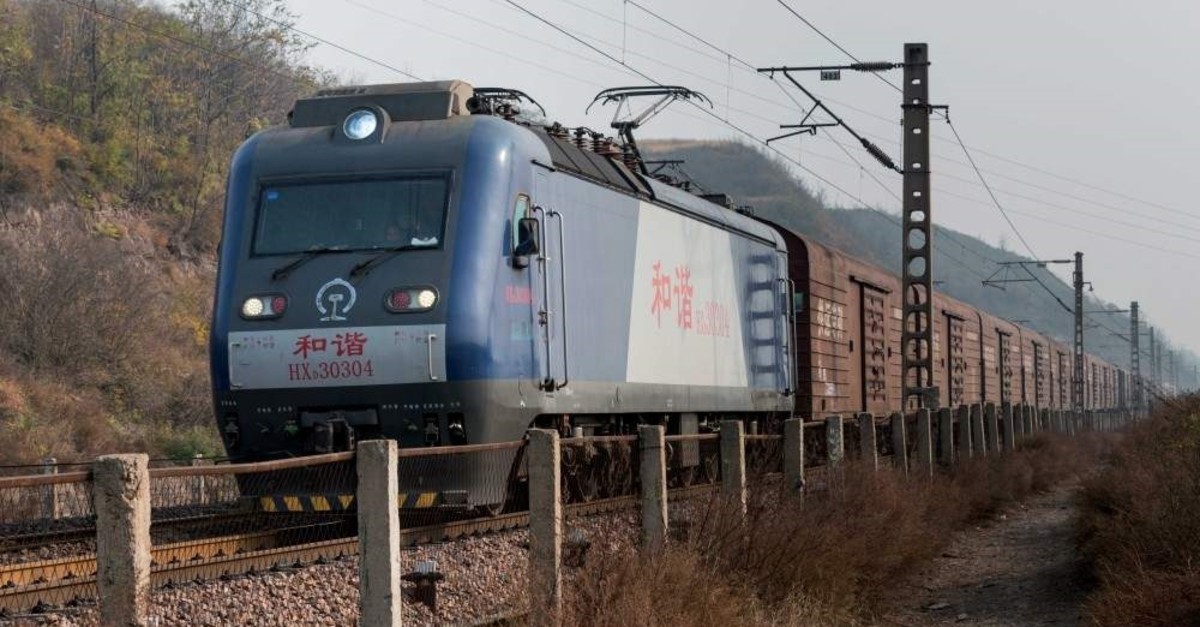 The China Railway Express, which has entered Turkey in Kars, will reach Europe by passing through the Marmaray tunnel in Istanbul beneath the Bosporus strait on Nov. 6.
by Daily Sabah with AA
Nov 03, 2019 5:48 pm
A critical phase of the China-led “Belt and Road Initiative” project, a trillion-dollar infrastructure development project addressing a potential of 3 billion people across 65 countries, is set to be completed in Istanbul. As part of the project, the first train service, or "Iron Silk Road," will be launching from China to Europe. The China Railway Express, which has already entered Turkey via the eastern province of Kars, will reach Europe by passing through the Marmaray tunnel which connects Istanbul's Asian and European sides beneath the Bosporus Strait on Nov. 6.
The train, which will be the first freight train to pass through the Marmaray, departed from China and entered Turkey thanks to the “Trans-Caspian International Transport Route (TITR)” train line.
When the train stop-off in Ankara, a ceremony will be held attended by the Minister for Transport and Infrastructure, Cahit Turhan. The 850-meter-long train, made-up of 42 carriages capable of carrying 76-cubic meters of freight, will be welcomed by Turhan at 02.30 p.m., Nov. 6. Officials from China and countries in the region are expected to attend the welcoming ceremony to be held at the historical Ankara Train Station.
In an interview with Anadolu Agency (AA) published yesterday, Minister Turhan stated that countries in the region had established significant cooperation for the effective use of the Baku-Tbilisi-Kars Railway Line, which constitutes the main pillar of the Middle Corridor, which was put into operation on Oct. 30, 2017 through the cooperation by Turkey, Georgia and Azerbaijan with the participation of President Recep Tayyip Erdoğan.
The block container train services are set to arrive from Xi’an, China, entering Turkey via the province of Kars, after traveled through Kazakhstan, Azerbaijan and Georgia.
Turhan said the train, which will pass below the Bosphorus via the Marmaray tunnel, would go on to Prague, passing through Bulgaria, Serbia, Hungary and Slovakia.
The minister added that the first uninterrupted freight train ride from China to Europe would also go down in history as the first freight train to reach Europe through the Marmaray. Offering further details on the train route, Turhan stated that the train would pass through the Turkish towns and cities of Ahılkelek, Kars, Erzurum, Erzincan, Sivas, Kayseri, Kırıkkale, Ankara, Eskişehir, Kocaeli, Istanbul (Marmaray) and Kapıkule (Edirne).
The Edirne-Kars project, set to be integrated into the Baku-Tbilisi-Kars railway passing through Turkey, will form one of the pillars of the "One Belt One Road" project. As part of the project, the Halkalı-Kapıkule Railway Line project was signed with a record 275 million euros in grants from the EU to Turkey this summer, as an important part of the railway route spanning from London to Beijing. With the project’s load-carrying capacity, goods and loads coming from Europe can be distributed within the country without entering Istanbul. Under the “Maritime Silk Road project,” of which Turkey is a partner, goods will also be transported to ports in Turkey by ship. Turkey will serve as the entry terminal for the Silk Road to European markets via Ambarlı in the maritime route project, which attests to around 30% of the global economy.
From Beijing to London
The One Belt One Road project will all for trains departing from Beijing will have uninterrupted access all the way to London for the first time. The project will provide an important geo-strategic and commercial alternative to U.S.-focused Atlantic power, allowing for the greater shift of resources to the East. The central corridor of the One Belt One Road Project, which is expected to be completed by 2049, is being referred to as a modern version of the historic Silk Road. China and other countries in the region are scheduled to invest $8 trillion in the project, while the agreement between China and Turkey envisions a budget of $40 billion to allow for extra trade routes.
With the project announced in 2013 by China, which is adapting to the free market economy, Chinese goods passing through the rail and sea transportation network, will reach other Asian countries, Europe and Africa in a shorter time. Furthermore, Turkey is set to gain foremost from the project thanks to its geographical position. Located in the “middle corridor” of the project, Turkey will connect Beijing and London in the most cost-effective way. The project, which will enable fast transportation from Europe to China, will significantly reduce transportation costs for trade going in both directions.
The main objective of the project, whose main pillars constitute the “Silk Road Economy Belt” and “Maritime Silk Road,” is to connect China to Central Asia, Russia and Europe over land, and to the Persian Gulf and the Mediterranean by sea, through the Indian Ocean. The project has been envisioned to create an alternative to the Western and U.S.-centric global economy, will establish Eurasia-based transportation and trade infrastructure and a China and Asia-centric trade network.
The project is supported by the Asian Infrastructure Investment Bank (AIIB), which is based in China but has international stakeholders, as well as the Silk Road Fund. The project has overseen Chinese capital flow to developing countries, including Indonesia, Malaysia and Pakistan, in an attempt to create a win-win situation and an alternative to Western capital. The project consists of significant transportation projects such as that currently gaining attention in Turkey.
Last Update: Dec 20, 2019 1:25 am