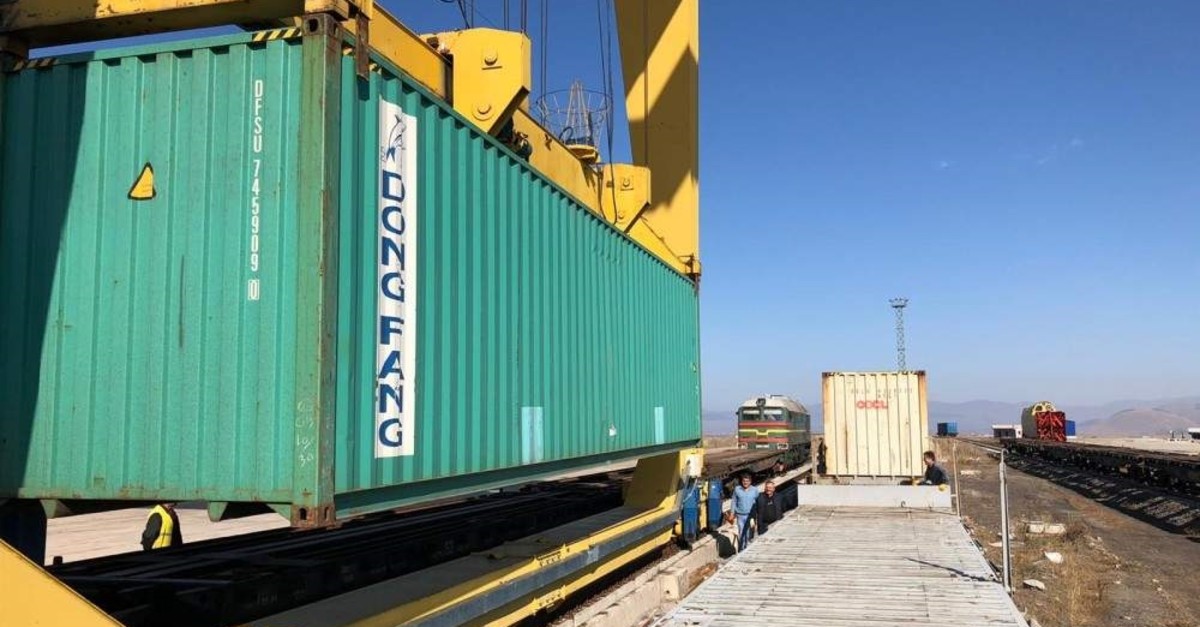 The first freight train from China entered Turkey in the eastern province of Kars on Nov. 3. (DHA Photo)
by Daily Sabah with AA Nov 05, 2019 5:30 pm

The first freight train to travel directly to the Czech Republic from China via Turkey marks the realization of the "Silk Railroad" dream on Wednesday.

The real Silk Road was an active trade route used between the second century B.C. and the 18th century that connected China and Europe through Anatolia and the Mediterranean region.

Within the scope of the Belt and Road Initiative, which aims to connect Asia, Africa and Europe via roads and sea lanes, a freight train will directly connect Czechia's capital Prague to Xian, the capital city of Shaanxi Province in central China, through Istanbul’s Marmaray tunnel for the first time.

The train, which will travel to Prague on a railway of 11,500 kilometers, will carry electronic goods in 42 containers, said Fatih Erdoğan, the head of logistic company Pasifik Eurasia, which undertook the railway’s section in Turkey.

"As a result of significant cooperation with Azerbaijan, Georgia and Turkic republics, we will conduct the first rail transportation through the China-Europe corridor," he stressed in a press conference in Istanbul.

The first freight train from China entered Turkey via the eastern province of Kars on Sunday, Nov. 3. Transportation and Infrastructure Minister Cahit Turhan on Sunday stated that the train would pass through the Turkish towns and cities of Ahılkelek, Kars, Erzurum, Erzincan, Sivas, Kayseri, Kırıkkale, Ankara, Eskişehir, Kocaeli, Istanbul's Marmaray tunnel and Kapıkule in Edirne.

China and Europe's trade volume is around $21 trillion, while only 3% of the transportation of this trade is made through railway, he noted.

He added that the first transfer on Wednesday is important because it will be the beginning of trade through this corridor. Turkey has geopolitical importance and several opportunities in railway transportation, he highlighted.

The railway will reduce transportation time between China and Turkey from one month to 12 days, while the whole route from Xian to Prague will take 18 days. The train will be welcomed in the capital Ankara on Wednesday.

The Belt and Road Initiative will provide an important geostrategic and commercial alternative to U.S.-focused Atlantic power, allowing for a greater shift of resources to the East. The central corridor of the project, which is expected to be completed by 2049, is being referred to as a modern version of the historic Silk Road.

China and other countries in the region are scheduled to invest $8 trillion in the project, while the agreement between China and Turkey envisions a budget of $40 billion to allow for extra trade routes.

With the project announced in 2013 by China, which is adapting to the free market economy, Chinese goods passing through the rail and sea transportation network will reach other Asian countries, Europe and Africa in a shorter time. Furthermore, Turkey is set to greatly benefit from the project thanks to its geographical position. Located in the “middle corridor” of the project, Turkey will connect Beijing and London in the most cost-effective way. The project, which will enable fast transportation from Europe to China, will significantly reduce transportation costs for trade going in both directions.