New YEKA tenders for renewable projects to be announced this month 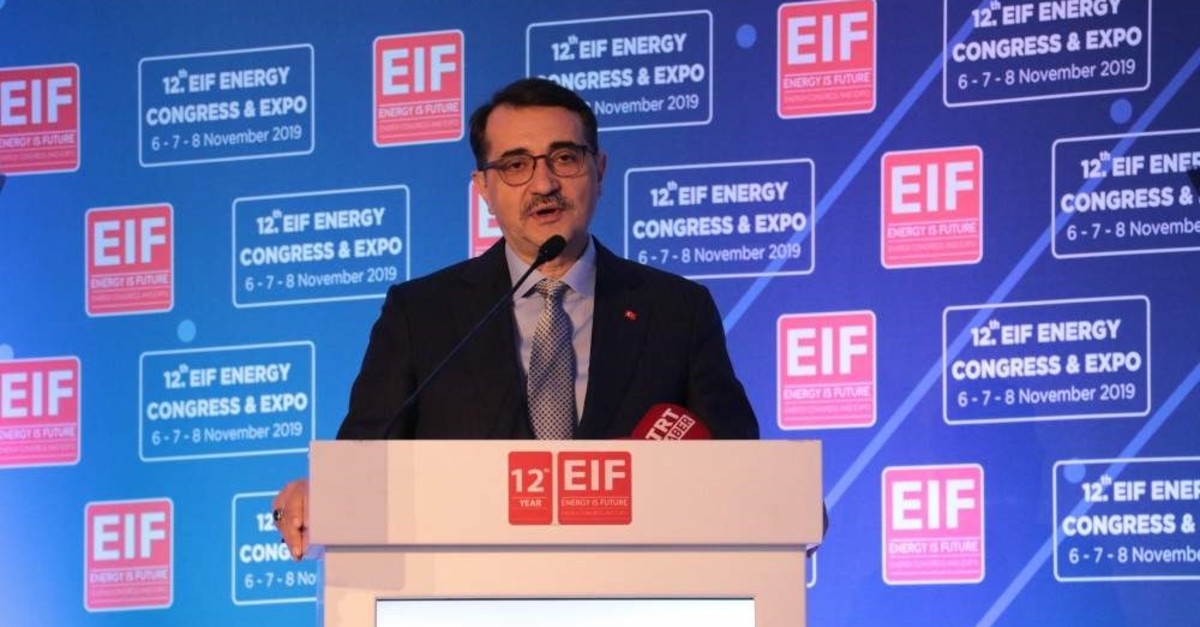 Turkey will announce mini Renewable Energy Resources Areas (YEKA) tenders later this month that will be held in the first quarter of 2020, Energy and Natural Resources Minister Fatih Dönmez said on Wednesday.

Speaking at the 12th International Energy Congress and Expo (EIF 2019) in Ankara, Dönmez relayed that Turkey is moving toward reaching new goals in almost all energy sectors including solar, wind, hydropower, geothermal and biomass. Renewable energy resources combined saw a total share of 64% in electricity production in the January-October period of this year, he said.

“If we manage to close the year with those levels, we will save up to $1.5 billion,” he added.

The energy minister conveyed the success achieved over the last 17 years in the wind energy sector with a 400-fold increase in installed capacity, while geothermal capacity rose 78-fold, biomass saw a 38-fold increase and hydropower encountered a 2.5-fold boost.

Turkey has taken significant steps in all kinds of renewable energy since the early 2000s. While the country's installed capacity in wind energy was 19 megawatts (MW) in 2002, it was increased to 364 MW in 2008, and today the number has surpassed 7,600 MW.

The YEKA tenders form part of Turkey's aim to supply 65% of its energy needs from domestic and renewable sources by 2023, which also includes the production of domestic coal, making the country's mining industry a large contributor to its local energy supply base.
FATİH TO RESUME DRILLING IN EAST MED
Furthermore, Dönmez told reporters on the sidelines of the event that Turkey's drilling vessel, the Fatih, will soon restart drilling in the Mediterranean Sea to continue oil and national gas exploration activities.

"The Fatih has concluded its drilling activities in Finike, and has come to Mersin Taşucu Harbor for supplies," Dönmez said, adding that after some renovation work and loading up with supplies, which will take a few weeks, it will restart drilling as soon as possible offshore of the Turkish Republic of Northern Cyprus (TRNC).

"If there are [oil and gas] resources, we will find them. And when we find them, we will share it with our nation. It will require some patience," he affirmed. The minister relayed that Turkey's Oruç Reis and Barbaros Hayrettin Paşa vessels are continuing their 2D and 3D seismic activities.

Meanwhile, French Total and Italian ENI will not begin in the contested Block 7, which the Greek Cypriot administration provided concession for the Franco-Italian consortium in violation of the rights of Turkey and the TRNC.

Sources from the Greek Cypriot administration said the French and Italian companies will commence drilling in Block 7 at the end of 2020 or early 2021, Athens-based news outlet Ekathimerini reported. Before that it will start conducting drilling activities in blocks 6 and 8, where it has more research data to work with. An official from the Greek Cypriot administration reportedly told Sigma TV that the consortium will launch new exploration work at the point or points that they consider will yield better results at this time.

At an event last month in Rome, Eni’s CEO Claudio Descalzi said he was not worried about Turkey’s moves but noted that “if someone turns up with warships, I won’t drill wells,” adding, “I certainly don’t want to start wars for wells.”

Turkey, as a guarantor nation for the TRNC, is currently carrying out hydrocarbon exploration activities in the Eastern Mediterranean with the two drilling vessels Fatih and Yavuz, along with the Oruc Reis and Barbaros Hayrettin Pasa seismic vessels in the same region.

Turkey has consistently contested the Greek Cypriot administration’s unilateral drilling in the Eastern Mediterranean, asserting that the TRNC also has rights to the resources in the area.

In 1974, following a coup aiming at Cyprus’s annexation by Greece, Ankara had to intervene as a guarantor power. In 1983, the TRNC was founded.

The decades since have seen several attempts to resolve the Cyprus dispute, all ending in failure. The latest one, held with the participation of the guarantor countries –Turkey, Greece, and the U.K. – came to an end without any progress in 2017 in Switzerland.

TURKEY AMONG TOP 5 IN EUROPE IN RENEWABLE INVESTMENTS

"As part of the national energy and mine policy, investments in renewables have carried Turkey to rank among the top five countries in Europe," he said during.

While Turkey ranks fifth in Europe in electricity production from wind energy, it ranks sixth in Europe and 12th in the world in wind-installed capacity.

However, Turkey highly depends on foreign resources for oil and natural gas, creating a burden on the economy.

Kalsın said Turkey's energy imports cost more than $45 billion per year, and underlined that energy efficiency is a significant topic for countries like Turkey, which have limited energy resources.

"It is important for our treasury to secure even 1% of energy efficiency," he said, and relayed that Turkey's national energy efficiency action plan for 2017-2023 that was prepared by the Ministry of Energy and Natural Resources will enable Turkey to use its resources more effectively.

He stressed that Turkey's energy market has improved over the last 17 years in line with its economic development due to reforms in the energy sector.

"During this period, our government has penned some important reforms and encouraged the private sector to enter the market, creating competition," he said.