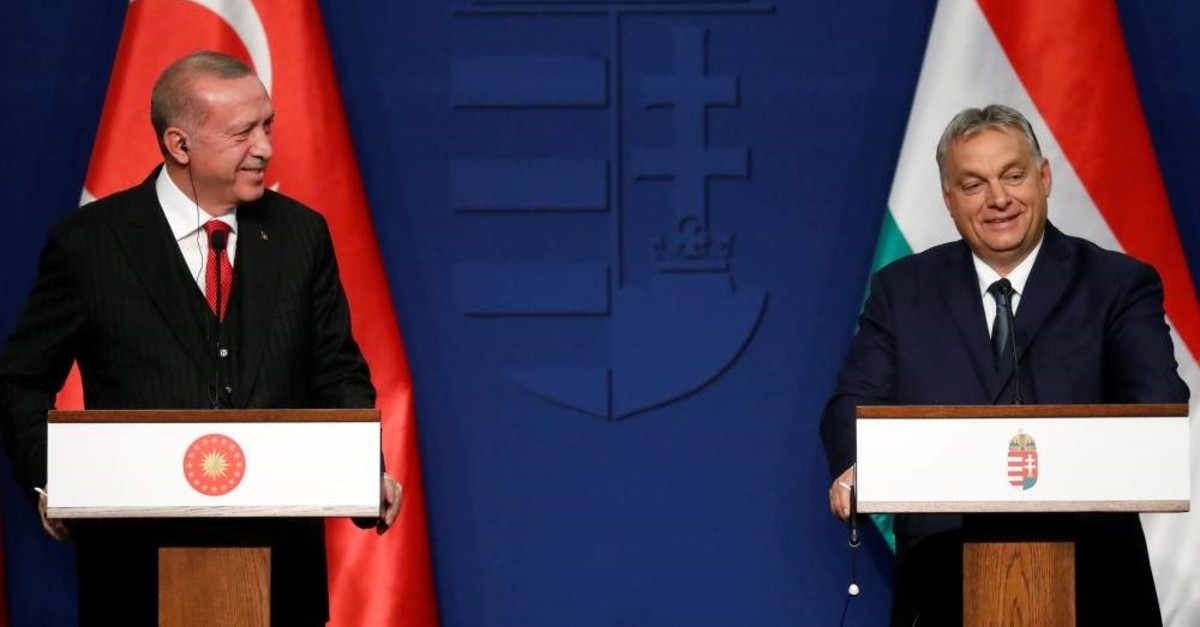 Turkey and Hungary vowed common dedication to expand their strategic partnership in political, military, cultural and economic areas during the 4th High-Level Strategic Cooperation Council meeting in Budapest on Thursday.
During the press conference following the meeting, President Recep Tayyip Erdoğan stressed that the two countries have been steadily taking steps to advance strategic partnership over the years. “We have reinforced the legal ground of our strategic partnership by inking 10 agreements in education, cultural and social services,” Erdoğan said in his address at the press conference.
Friendly relations between the two countries, especially in the economic, political and cultural areas, have been strengthening in recent years thanks to the bilateral high-level visits and consultation mechanisms that added impetus to these ties.
Hungary being a NATO ally and the support it expressed for Turkey’s EU membership had a positive impact on the progress of the bilateral ties.
Within the framework of the contact, Turkey signed 10 agreements with Hungary that pave the way for cooperation in the field of road transport, cultural education, social services and space, as well as cooperation between the foreign ministries and the state archives. These agreements will reflect the scope and diversity of relationships.
Speaking of defense cooperation, the president emphasized that Ankara and Budapest will work on accomplishing various defense projects in the upcoming period.
Hungary is the first country in the EU to purchase the Ejder Yalçın, an armored vehicle that was domestically manufactured by the Turkish defense industry firm Nurol Makina for use in combat zones.
Erdoğan also extended Turkey’s gratitude to Hungarian Prime Minister Viktor Orban for his open support for Ankara’s full accession to the European Union. “The bilateral relations between countries should not hijack Turkey’s ties with the union. The valuable contribution Turkey will make to the bloc should be comprehended by all,” he said.
The president also hailed the Hungarian administration’s cooperation for the Turkish Maarif Foundation’s educational activities in the country. Erdoğan announced that Maarif schools will officially start operating in Hungary in September 2020 and will adopt Hungary’s national curriculum.
BILATERAL TRADE GOAL OF $6B
For his part, the Hungarian prime minister hailed the development of the Turkish-Hungarian commercial ties but underscored that the trade volume should reach $6 billion.
According to the Turkish Statistical Institute (TurkStat), Turkey’s exports to the country in the January-September period of this year amounted to some $885.5 million, while its imports stood at $913.6 million. Thus, the trade volume between the two countries totaled nearly $1.8 billion in the said period. The bilateral trade volume stood at $2.6 billion last year.
Automotive industry goods top the list of products exported to Hungary, followed by clothing, steel, electronic devices and chemical goods. On the other hand, the most imported goods from Hungary are land vehicles and livestock.
On the investment side, Hungary carried out $29 million worth of investments in Turkey between 2002 and 2018. In the same period, Turkey’s direct investments in Hungary have reached $58 million.
According to Foreign Ministry data, there were 81 Hungarian companies and eight liaison offices operating in Turkey as of June 2018. These companies carry out operations in trade, tourism, energy, chemical products, glass and glass products and food sectors.
Turkish companies operating in Hungary are mainly engaged in the trade of goods, especially textiles, construction materials, jewelry and food items.
Orban noted that the Hungarian Eximbank opened a credit line of $200 billion to support the joint projects by Turkish and Hungarian companies in third countries, particularly on the African continent. He announced that Turkey and Hungary will jointly work in Ghana’s development of water and health works as they sent a delegation of medical doctors to the country.
The prime minister also drew attention to the significance of energy cooperation between the two countries. “If we want to be independent in ensuring our energy security, we need Turkey’s support,” Orban remarked. “Turkey could provide gas for Central European countries and I believe natural gas could enter the Hungarian market via Turkey by the end of 2021,” Orban said, without revealing the details of any project.
Orban stressed his country’s willingness to sustain its high-level partnership with Turkey in military and political areas.
Turkey is also enjoying an increasing number of Hungarian tourists. It had welcomed some 104,701 Hungarian tourists in the first nine months of the last year, a figure that increased to 128,739 in the same period of this year, a 23% increase year-on-year. 2018 as a whole saw 123,448 tourists from Hungary arriving in the country.
Last Update: Dec 20, 2019 1:32 am
RELATED TOPICS