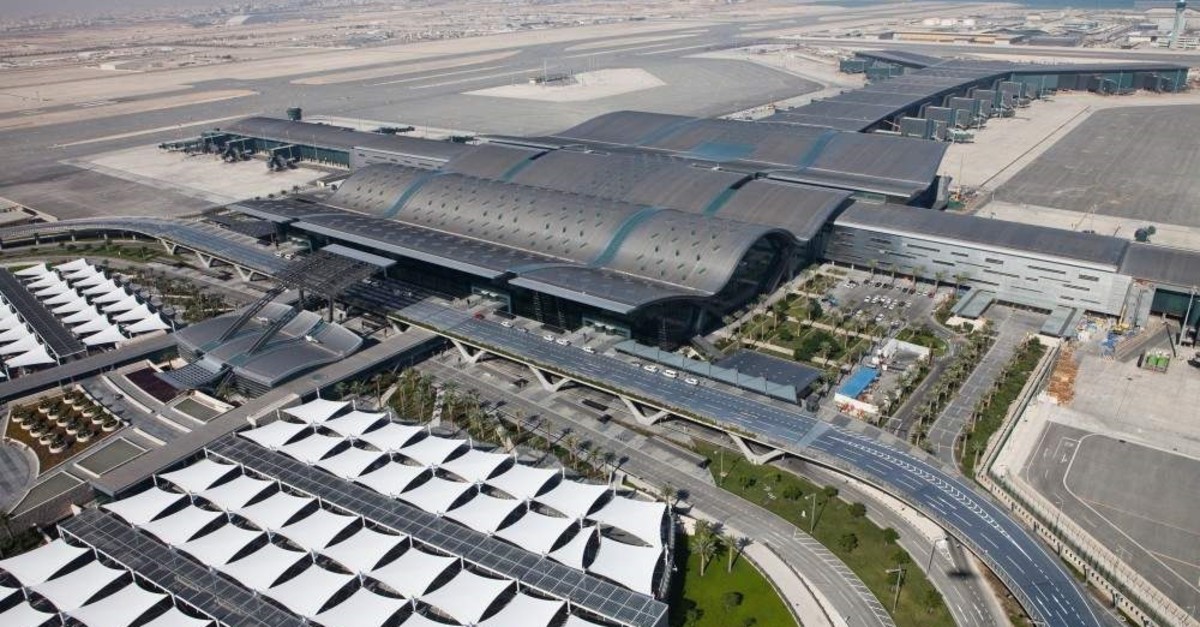 Turkish contractor TAV ?n?aat completed the construction of Doha's award-winning Hamad Airport in 2014. (?HA Photo)
by Daily Sabah with AA Nov 10, 2019 6:25 pm
Qatar offers significant opportunities to Turkish companies in several sectors, including services, logistics, manufacturing and information technologies, said the chief executive officer of the Investment Promotion Agency of Qatar.
Qatar is proud to see an increase in the number of Turkish companies operating in the country, CEO Ali Alwaleed Al-Thani told Anadolu Agency (AA) Sunday.
"This is a testimony to not only our strong friendship and bilateral relationship but also the business potential that Qatar offers to Turkish firms," he said.
Qatar welcomes the diverse capabilities and expertise of Turkish companies that are active mostly in Qatar's construction sector, he underlined.
"We are eager to welcome increased diversification in terms of sector exposure. Currently, there are exciting new projects being launched by leading Turkish firms in the chemical and media fields.
"There are also significant opportunities in the services industry, as well as logistics, manufacturing and information technology," Al-Thani highlighted.
The country's platforms such as Qatar Financial Center and Qatar Free Zone Authority attracts foreign firms in numerous sectors, he noted.
He stressed Qatar also has trade partnerships and relations with Asian and East African countries while it has a unique geographical position to access neighboring countries, such as Oman and Kuwait.
Stating that Qatar provides a highly conducive business environment to foreign firms in general, Al-Thani underlined: "Turkish companies can benefit from business-friendly regulations in terms of work visas, labor mobility, permanent residency, property ownership and attractive access to local funding.
"In addition to the 100% foreign ownership permission, companies can also repatriate 100% of their profits."
Qatar aims to attract and welcome more Turkish firms and enhance cooperation between the two countries, he added.
Turkish contractors have undertaken 137 projects in Qatar to date, totaling $14.8 billion. TAV İnşaat, Turkey's leading airport construction firm, was in charge of building the main terminal of the Hamad International Airport in Doha. A total of $4 billion was invested in the airport, which started service in April 2014. TAV led the joint venture with the Japanese Taisei Corporation.
On the other hand, Qatar's investments in Turkey are estimated to surpass $20 billion to date. The small Gulf nation has made a number of significant acquisitions in Turkish retail, media and finance businesses. For instance, the Qatar National Bank (QNB), the Gulf's largest lender, acquired Turkey's Finansbank for $2.94 billion in June 2016 from the bank's Greek shareholder, the National Bank of Greece. The same year, the Commercial Bank of Qatar, which had a 75% stake in ABank – later rebranded as Alternatif Bank – bought the remaining 25% from Anadolu Group for $222.5 million. Moreover, Qatari investment fund Mayhoola for Investments now fully owns Beymen and Ay Marka brands after an agreement with Boyner Holding. Qatar's beIN Media Group acquired Turkish satellite television provider Digitürk in June 2016.
The volume of bilateral trade between Turkey and Qatar has increased by 84% over the last decade, last year totaling $1.3 billion, according to data from the Turkish Statistical Institute (TurkStat). In the first nine months of this year, Turkish exports were recorded at $838 million, while imports from the Gulf nation came to $205 million.
In June, Turkey’s leading military systems developer HAVELSAN has signed a deal with Jaidah, an international company based in Qatar and operating in the fields of energy, telecommunications, automotive and security.
Last Update: Dec 20, 2019 1:35 am
RELATED TOPICS