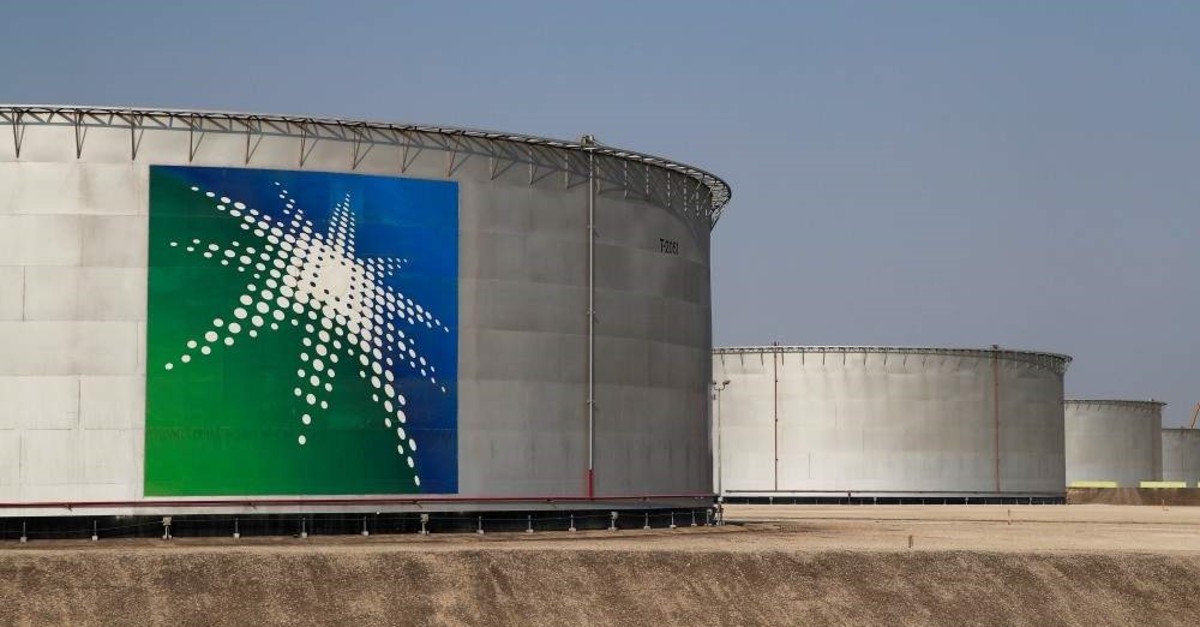 Oil tanks at Saudi Aramco oil facility in Abqaiq, Saudi Arabia. (Reuters Photo)
by Nov 10, 2019 6:45 pm
Saudi state oil giant Aramco will sell up to 0.5% of its shares to individual retail investors and will be restricted from issuing additional shares for a year after the initial public offering (IPO), its prospectus said on Saturday.
Aramco fired the starting gun on what is likely the world's largest listing on Nov. 3 after a series of delays. The offering, set to rank it as the world's most valuable company, will begin on Nov. 17, the prospectus said.
Crown Prince Mohammed bin Salman is seeking to sell the shares to raise billions of dollars to diversify the Saudi economy away from oil by investing in non-energy industries. Bankers think the long-awaited IPO will value Aramco around $1.5 trillion.
The more than 600-page prospectus published on Saturday did not include details of how much of the company would be floated in total or of any commitments from cornerstone investors.
Sources have said the company could sell 1%-2% on the Saudi stock market. If the government sells 2% of Aramco shares, the retail offering could account for 25% or $10 billion of the deal size at the top valuation of $2 trillion. The prospectus, which revealed few details, did not say how the government will use the proceeds from the sale.
The prospectus said that among the risks for investors were the potential for terrorist attacks and the potential for encountering antitrust legislation, as well as the right of the Saudi government to decide maximum crude output and direct Aramco to undertake projects outside its core business.
Aramco may also change its dividend policy without prior notice to its minority shareholders, it said.
"Apart from the oil price, of course, the main risks are the degree to which Aramco needs to shoulder the burden of OPEC Plus output restraint, allocation of capital into projects which maximise value for Saudi overall as opposed to Aramco minority shareholders, physical security risks and the dividend payout ratio in the long-term," said Hasnain Malik, head of equity strategy at Tellimer.
"Valuation at the time of the IPO will depend on how much of demand is made up by subscribers who are prepared to overlook these factors in favor of Aramco’s low depletion rate ... and its very low cost of extraction versus peers."
Aramco's oil facilities were targeted on Sept. 14 in unprecedented attacks that temporarily shut 5.7 million barrels per day (bpd) of output - more than 5% of global oil supply.
The prospectus said the government will have a "statutory lockup period" for disposing of any shares after the listing for six months, and a contractual lockup period for 12 months. Aramco cannot list additional shares for a period of six months after trading starts, and will also be restricted from issuing additional shares for 12 months.
The offering for institutional investors will begin on Nov. 17 and end on Dec. 4, while retail investors will be able to bid for the shares from Nov. 17 to Nov. 28, the prospectus said.
Aramco has been in talks with Gulf and Asian sovereign wealth funds and wealthy Saudi individuals to secure top investors of the IPO, but no cornerstone investor is yet to formally agree to a deal.
The Russia-China Investment Fund is working to attract Chinese investors for Aramco's planned IPO, the head of Russia's RDIF sovereign wealth fund said on Thursday.
Bankers have told the Saudi government that investors will likely value the company at around $1.5 trillion, below the $2 trillion valuation touted by Prince Mohammed when he first floated the idea of an IPO nearly four years ago.
Initial hopes for a 5% IPO on domestic and international bourses were dashed last year when the process was halted amid debate over where to list Aramco overseas.
Aramco said the timetable was delayed because it began a process to acquire a 70% stake in petrochemicals maker Saudi Basic Industries Corp. The prospectus said Goldman Sachs was named as a stabilizing agent for the deal.
Analysts from banks working on the Riyadh listing have projected a wide valuation range between $1.2 trillion to $2.3 trillion. At the top valuation of $2 billion, Aramco could potentially raise $40 billion, topping the record-breaking $25 billion raised by Chinese e-commerce giant Alibaba in 2014.