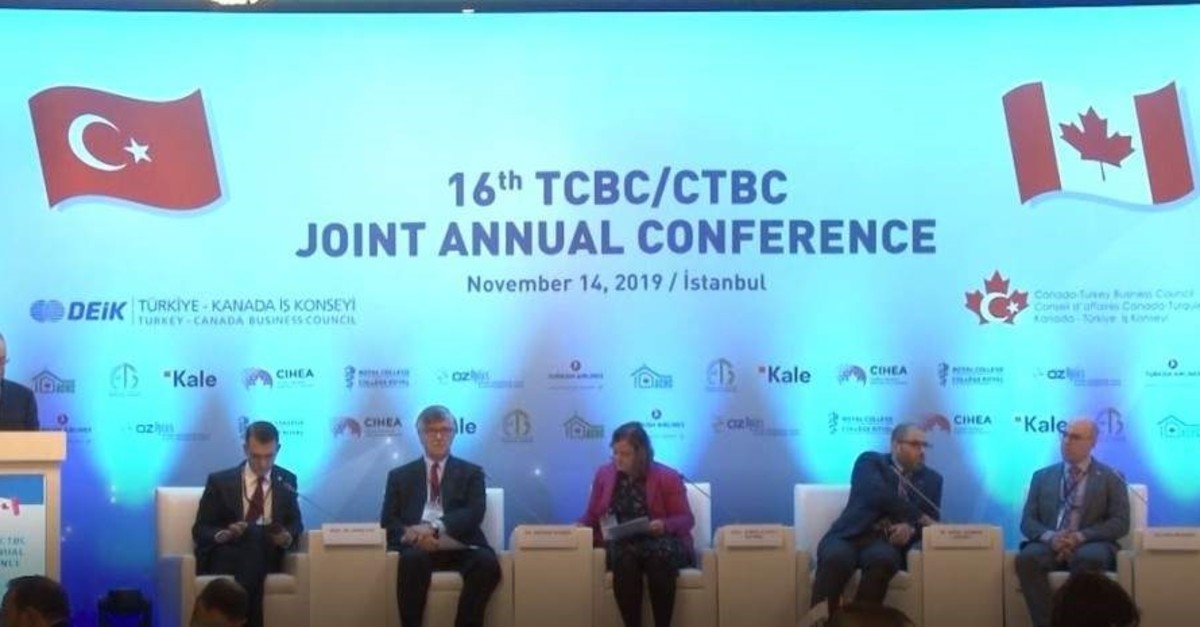 Shortly after establishing a legal framework for the development of bilateral economic and commercial relations, Turkey and Canada are taking steps toward launching negotiations for a trade agreement

At the first term meeting of the Turkey-Canada Joint Economic and Trade Committee (JETCO), which was held in Istanbul Thursday, the Turkish side proposed to start negotiations on the Free Trade Agreement (FTA) between the two countries.
Deputy Minister of Trade Gonca Yılmaz Batur gave a copy of the list of potential products that would pave the way for export to her Canadian counterpart.
According to data from the Trade Ministry, Turkey-Canada JETCO’s first meeting was presided by Deputy Minister of Trade Batur and Jonathan Fried, Personal Representative of Prime Minister Justin Trudeau for the G20 and Coordinator for International Economic Relations at the Department of Global Affairs, Canada. The JETCO meeting coincided with the 16th annual Turkey-Canada Business Council/Canadian-Turkish Business Council meeting.
The deputy minister praised Turkey’s extensive network of 20 FTAs with leading countries, including South Korea and Singapore, and the customs union with the European Union.
During the meeting attended by the representatives of the relevant public institutions and organizations, bilateral trade and economic relations were discussed, while the Turkish side emphasized that the Turkey-Canada FTA negotiations, which were pre-negotiated for sustainable trade and economic relations in 2013, should be initiated as soon as possible. The Agreement on the Mutual Promotion and Protection of Investments between Turkey and Canada was also brought up, and a draft was requested from the Canadian side.
During the talks, Batur raised the issue of Canada's protective measures, as well as anti-dumping and countervailing duties on Turkish products. Deputy Minister Batur said that in order to focus on more strategic agendas in the coming period, a closer effort was required on trade barriers such as anti-dumping and countervailing duties applied by the Canadian side and that such practices should not be on the agenda as much as possible, stressing that Canada's growing protectionist approach was worrisome.
In this context, it was agreed that the technical delegations would hold meetings to share information on anti-dumping and countervailing duties.
Batur gave Fried a copy of the list of potential products that would pave the way for exports prepared by the Trade Ministry, saying it would be beneficial for Canada to carry out a similar study for the development of bilateral trade.
The contracting sector was also discussed during the meeting. Emphasizing the importance of cooperation in this sector, Batur and Fried agreed that it would be useful to work on a project basis on cooperation in third countries.
For his part, Fried stressed the significant advantages Turkey offers for Canadian investors and suggested that the Canadian businesspeople should benefit more from the Turkish business environment.
“Turkey and Canada, for the development of the bilateral trade, should resolve some issues including taxation and technology transfer,” Fried said.
Foreign Economic Relations Board (DEİK) Turkey-Canada Business Council Chair Osman Okyay also remarked that the two countries have begun to strengthen economic relations. He also stressed that the JETCO agreement signed by Turkish and Canadian trade ministers in June will further expand commercial relations and reciprocal investments between the two countries.
Turkey-Canada bilateral trade volume was recorded at $3.2 billion last year, including Turkish exports worth $1.2 billion and Canadian exports worth $2 billion. In the first nine months of this year, Turkish Statistical Institute (TurkStat) data revealed that Turkey’s exports to Canada came in at $659 million and its imports from the country totaled $1 billion.
2nd JETCO meeting in Canada
Under the chairmanship of the deputy ministers, a thematic session was held as part of the first term meeting of JETCO with the heads of business councils, Turkish and Canadian businesspeople in attendance.
In this section, innovation, infrastructure development projects, smart city and next-generation technologies, mining and renewable energy, and women's positions in the workforce were discussed as the main themes.
The second round of this meeting, which was acknowledged as very important for the future of bilateral trade and economic relations between the two countries, was decided to be held in Canada in 2020.
Last Update: Dec 20, 2019 1:41 am
RELATED TOPICS