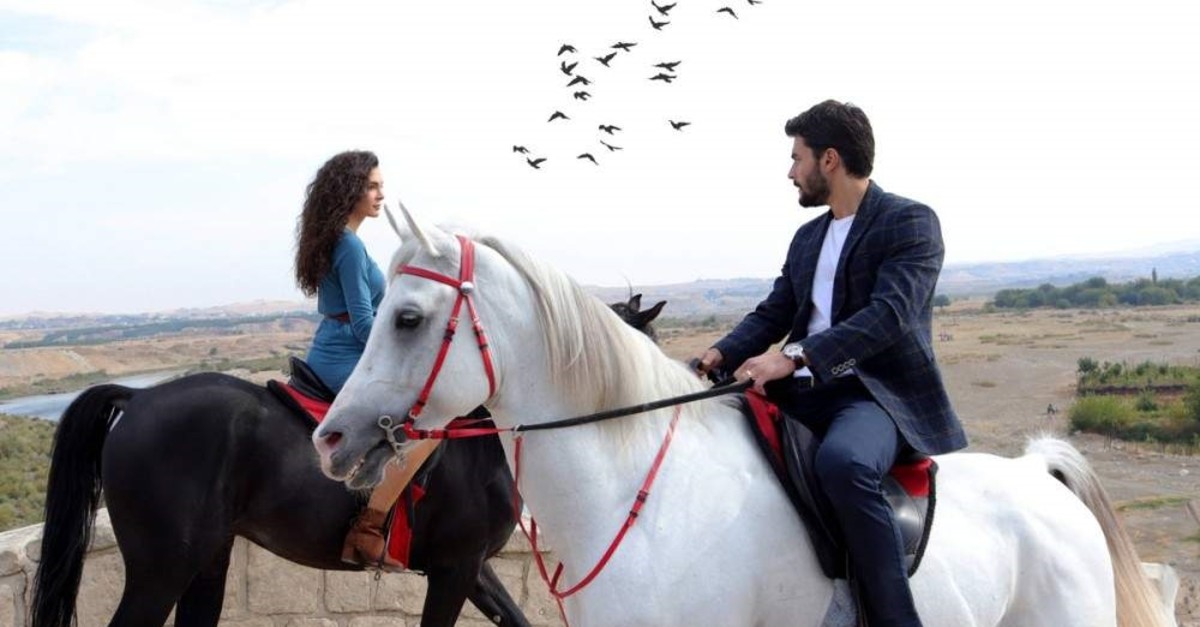 A scene from the TV series ,Hercai, (,A Fickle Heart,) broadcast on ATV.
by Daily Sabah with AA Nov 17, 2019 8:40 pm
Turkish TV series are strengthening exporters' hand abroad by spotlighting local specialties in the areas of food, furniture and clothes.
The demand for Turkish goods and the country's brand value rises significantly in countries where Turkish series enjoy wide viewership.
Exports of Turkish series reached $500 million last year, up from $350 million in 2017, according to Trade Ministry data. The series are a hot ticket across a wide chunk of the globe, including the Middle East, Balkans, Africa, South America, Central Asia and the Far East.
TURKISH SERIES, FURNITURE: 2 RISING STARS
Koray Çalişkan, the head of furniture showroom company MODOKO, said the deep interest in Turkish series helps promote the country's image and effectively sell domestic products.
Compared to 2016, in 2018 exports to Venezuela rose 572%, to Argentina 234%, to Paraguay 105%, to Peru 88%, and to Spain 55%, he said.
Furniture sales to these countries also climbed with the support of the popular TV shows, he told Anadolu Agency (AA). "Exports of handcrafted furniture, which had a prominent place in the series, gained steam," he said.
Middle Eastern countries, where Turkish TV series are especially popular, constitute almost half of furniture sector exports, Çalişkan stressed. Many viewers captivated by the shows even try to learn how to speak Turkish, he said.
Among the Turkish TV series that have achieved huge success in many countries around the world are “Sen Anlat Karadeniz” (“Lifeline”), “Eşkiya Dünyaya Hükümdar Olmaz” (“The Bandits”), “Hercai” (“A Fickle Heart”), “Bir Zamanlar Çukurova” (“Once Upon a Time in Çukurova”), “Aşk ve Mavi” (“Love and Hate”) and “Kanatsız Kuşlar” (“Broken Wings”), which are broadcast on ATV, owned by Turkuvaz Media Group.
In the meantime, the country’s oldest furniture showroom dealer MODOKO last month announced it will open a branch in the U.S. to sell their wares and hopefully contribute to the two countries’ bilateral trade target.
The showroom will be launched with the support of the Turkish Exporters’ Assembly (TIM). Following the launch, MODOKO aims to reach $1 billion in furniture sales in its first year and contribute to the countries’ $100 billion bilateral trade target, agreed upon by President Recep Tayyip Erdoğan and his American counterpart President Donald Trump during their G20 meeting in Osaka, Japan in June.
The showroom will also include all the departments a business needs – management, sales, service, logistics, advertising and legal.
WORLD LEARNS U.S. BRANDS FROM MOVIES
Çalişkan said: "Like every sector, we need promotion and branding, and the series offers an amazing opportunity for these."
While exhibitions and fairs can cost companies dearly, product placement in TV series provides a low-cost and effective advertising opportunity, he explained.
The world learns about U.S.-based brands from movies and TV series, and Turkey's companies can similarly get the global spotlight through its own popular series, he expressed.
Touching on the U.S. presence of his company, MODOKO, he said showrooms also offer opportunities for the country's exporters.
"Using our U.S. showrooms, we will easily do exports to Latin America countries," he said.
The Turkish furniture sector expects to reach $3.7 billion in exports at the end of this year and is targeting $10 billion by 2023.
TURKEY’S SOFT POWER
Eyüp Kerem, founder of the Bazarea e-commerce website, which focuses on Gulf countries, stressed that TV series are Turkey's soft power and gain more influence with each passing day.
"The influence of series isn't limited to a small area, but they affect many regions, including South America, Asia, the Middle East and Europe," he said. The effects on people in these regions is felt in Turkey's exports, he added.
From New Zealand to Sweden, people seek out Turkish goods such as coffee, he noted.
He said for foreigners, Turkey has a brand value, and Turkish exporters use this brand to boost trade.
"Especially Turkish products used in Turkish historical TV series are demanded by foreign customers," Kerem said.
He also said that clothes worn by actors or actresses in the country's series become highly sought after in the Arab world.
Last Update: Dec 20, 2019 1:45 am
RELATED TOPICS