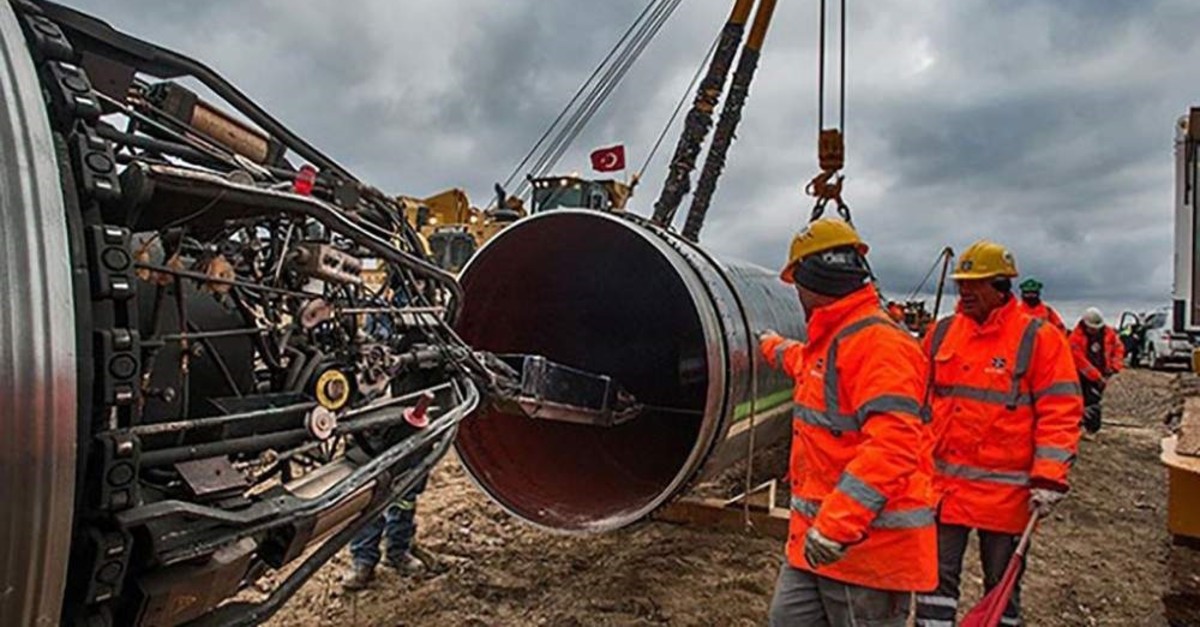 The 1,850-kilometer-long Trans Anatolian Natural Gas Pipeline Project (TANAP) and the 878-kilometer-long Trans Adriatic Pipeline (TAP) were connected at the Maritsa River located on the Turkey-Greece border in November 2018.
by Daily Sabah Nov 19, 2019 6:17 pm
The ceremony for gas compression into the Trans Adriatic Pipeline (TAP) will be held on the Turkish-Greek border town İpsala at the end of this month. President Recep Tayyip Erdoğan and Azerbaijani President İlham Aliyev are scheduled to attend the ceremony that will mark a significant step in the Southern Gas Corridor project, of which the main part is the Trans Anatolian Natural Gas Pipeline (TANAP).
The gas release to the TAP project, which will be fully completed next year, will strengthen Turkey’s key role in regional energy supply security. The country has been reinforcing its strategic superiority in energy projects that carry Azerbaijani and Russian gas to Europe. While the multinational and regional Southern Gas Corridor project nears end, TurkStream, that will bring Russian gas to Turkish and European markets, is also expected to start operating by the end of this year.
The Southern Gas Corridor carries Azerbaijani gas produced in the Shah Deniz field and other fields south of the Caspian Sea to European markets. Its largest component TANAP, accomplished with an investment of $6.5 billion, is now poised to launch the next phase of the project by releasing gas to TAP with a ceremony to be held on Nov. 30.
TAP, the European leg of the Southern Gas Corridor, starts in Greece and extends into Italy and is yet to be completed. The Turkish and Azerbaijani presidents are expected to convey the message that their countries are ready to supply gas to Europe, boosting the continent’s gas supply security.
TANAP, which was officially inaugurated in June 2018 with a grand ceremony in the central Turkish province of Eskişehir, is estimated to deliver 3.08 billion cubic meters of gas to the Turkish gas network. By the end of June 2020, the pipeline is expected to deliver 6 billion cubic meters of gas to Turkey. The Southern Gas Corridor, Petroleum Pipeline Corporation (BOTAŞ), BP and SOCAR Turkey own 51%, 30%, 12% and 7% of the shares in TANAP, respectively. When TAP is fully ready to operate, the entire pipeline project will have the capacity to deliver 16 billion cubic meters of gas.
Turkey will receive 6 billion cubic meters of this gas via TANAP, while the remaining volume will be transported to Europe through TAP.
The 4.5 billion-euro ($5.1 billion) TAP will transverse Greece, Albania and the Adriatic Sea to reach Italy. Azerbaijani gas is expected to reach European markets by 2020.
The 1,850 kilometer-long TANAP and the 878 kilometer-long TAP were interlinked at the Maritsa River located on the Turkey-Greece border in November 2018.
Last Update: Dec 20, 2019 1:48 am
RELATED TOPICS