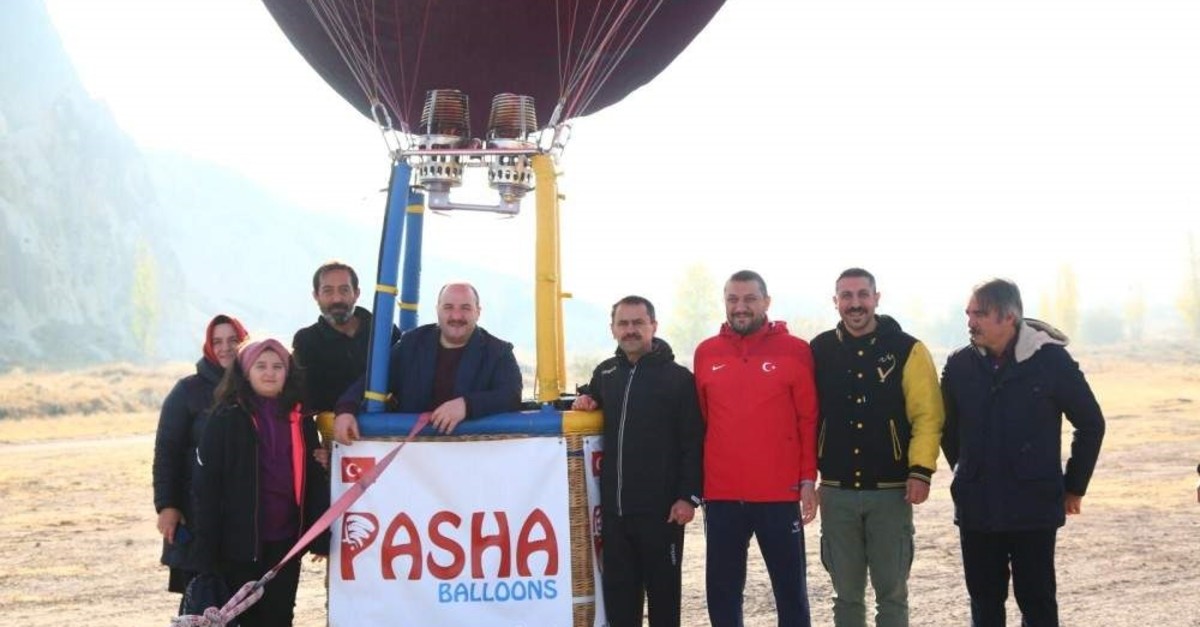 Industry and Technology Minister Mustafa Varank flew over the Cappadocia skyline, riding the first domestically produced hot air balloon, Nev?ehir, Nov. 18, 2019. (AA Photo)
by Daily Sabah with AA Nov 19, 2019 6:38 pm
Turkish Industry and Technology Minister, Mustafa Varank, arrived in Turkey's scenic Cappadocia region Monday to ride the country's first domestically made hot air balloon.
The minister inspected the vessel, produced by Turkish firm Pasha Balloons, who operate in the region.
After piloting the balloon over the region's unique fairy chimneys, Varank underlined the contribution balloon tours made to the local tourism sector, stating that millions of euros would, from now on, remain in the country thanks to their local ownership. "Taking into account maintenance, repair and other costs, we are talking about a much larger economy with great export potential," he added. Airborne tests of the balloon were completed on Oct. 11.
The annual costs of dome replacements, maintenance and fabrics of the 230 balloons which operated in various locations around Turkey stand at nearly 3 million euros ($3.32 million). Domestic production efforts aim, in the first stage, to reduce expenditures on maintenance and repair costs and later produce an annual 60 vessels.
Besides meeting domestic needs, the balloons – each worth 80,000 euros (nearly $88,500) – are also planned for export. The life-span of a balloon is around four years, meaning that 30-40 new balloons are required per year. With the localization of production, it is thought that approximately 5 million euros will be saved annually. Given that employment and materials will stay inside the country, domestic hot air balloons will be 50% cheaper.
According to Anadolu Agency (AA), over 500,000 tourists have enjoyed hot air balloon tours in Cappadocia this year so far. Depending on the weather conditions, the balloon tours can be organized 300 days per year, with 150 hot air balloons adorning the skies over Cappadocia simultaneously during the day.
Last Update: Dec 20, 2019 1:47 am
RELATED TOPICS