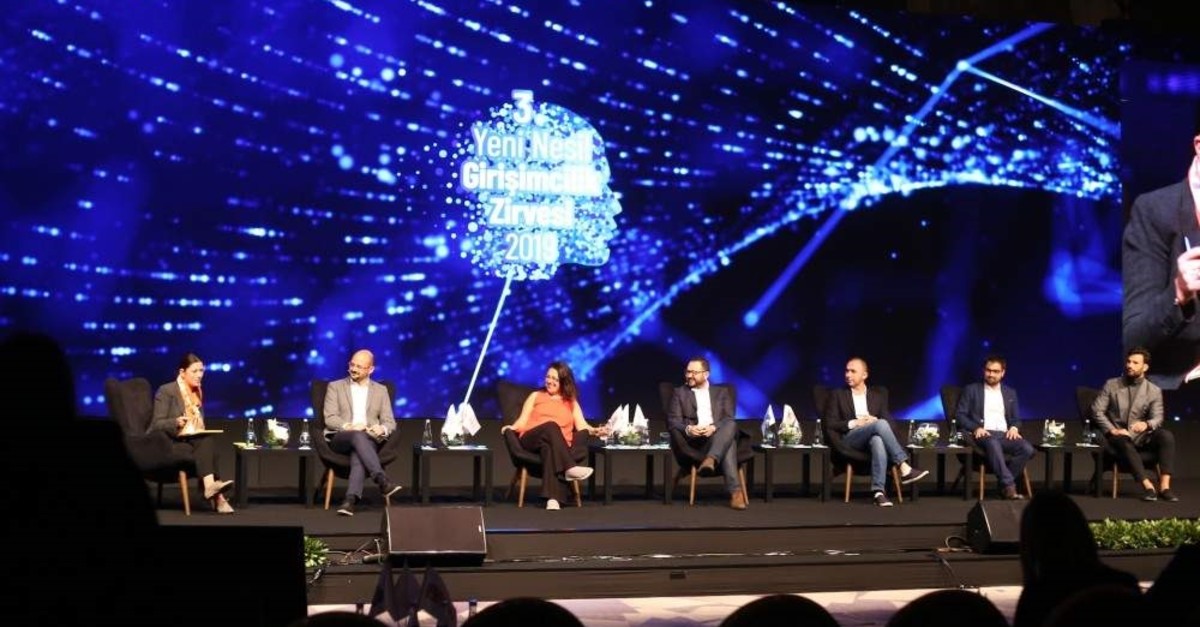 Many managers, founders and startups operating on a global level shared their stories on the sidelines of the New Generation Entrepreneurship Summit, Istanbul, Nov. 27, 2019.
by Timur Sırt Nov 29, 2019 6:33 pm

Many global startups based in Turkey and operating in sectors as varied as cybersecurity, gaming, entertainment, health and financial technology, are making a marked contribution to the country's exports and the nurturing of well-trained human resources

Startups with a global reach are eyeing not just Turkey, but the entire world, as a target market, using Turkey's engineering talents to expand globally. Startups in the field of games, education, cybersecurity, health, and entertainment take the global stage.

Over the course of the New Generation Entrepreneurship Summit held on Wednesday, a number of company heads, founders and officials representing startups operating on a global level were able to share their stories. The start-ups present included a number of successful Turkish-based firms such as Foriba, Picus Security, Armut.com, 11 Sight, Appsilon Diamond Works, and Faladdin, who all claimed that further investment was needed to increase the number of startups that contribute to Turkey's export figures and the employment of qualified engineers. The summit, attended by investors, entrepreneurs and institutions, emphasized the need for more investment to boost a culture of entrepreneurialism.

Koray Gültekin Bahar, who continued to serve as CEO after Foriba's acquisition by the U.S.-based Sovos company, expressed joy at Turkish engineering know-how having made global success of cloud-based tax solutions.

"Sovos used our experience as a center of expertise after the purchase. In other words, Foriba's field of activity and expertise will expand further,” Bahar said. “By the end of the year, we will export the solutions that we use to around 15 countries in Europe. We will also have the opportunity to strengthen our operations in Asia, Vietnam, Taiwan, and Indonesia. As Foriba, we continue to lead the digital transformation projects needed by major holdings using SAP software. The software will also contribute to our exports," he added.

ALL STAFF IN TURKEY

Başak Taşpınar, founder of Armut.com, which entered into the Deloitte Fast 500 startups with its wildly successful growth path, pointed out that although growth was occurring in similar fields in every country, Turkey is started to take the lead. “We want to continue on our goal of success in the market place through global contracts. We have achieved successful growth in Romania and Saudi Arabia. Now we have caught nice mobility in the U.S. and U.K. market,” Taşpınar said. “We operate in all these countries from Turkey. Like other global firms, we manage the structure we have built via an algorithm we have created from the center,” he added.

Picus Security, which has made waves in the cybersecurity sector thanks to its attack simulation technology, is taking steps towards becoming a global success story of an entrepreneur with an academic background.

Volkan Ertürk, co-founder of Picus Security which recently signed a $5 million A-series investment agreement, stated that they would use the investment they received to increase their ability to do global business. “Our success in having become one of the top five cybersecurity companies on Gartner's prestigious list of Cool Vendors in October 2019 raised our profile internationally. The Cyber Security Center and Engineering Base we will establish will also constitute an important muscle for developing new solutions in the field of cybersecurity. Our goal is to develop new, innovative ideas, such as we do in the field of Attack Simulation,” Ertürk noted.

INVESTORS FIRST LOOK AT THE TEAM

Although many entrepreneurs think that all it takes is a brilliant idea to convince the investor, investors pay as much attention to the team set to implement the project, aiming to gauge their tools and experience. The growth and global goals of the startup also influence the decision of the investor.

The New Generation Entrepreneurship Summit organized by Para Magazine saw the arrival of a number of investment networks and venture capital fund managers offering important advice to entrepreneurs. The executives, representing significant investment funds such as the Şirket Ortağım Angel Investor Platform, Revo Capital, and Keiretsu Forum Angel Investment Network, said that their investors prioritized the quality of the talents and the team involved in startup projects, as well as their potential of growth and doing global business.

Many brilliant ideas come to an end before they even come to fruition. Ideas that are not based on long years of accumulation and research and development (R&D) work, or are not protected by patents, can easily be copied. Thus a blend of talent, ambition and an unwavering determination are key in order to set to work.

Although very few entrepreneurs in Turkey have a global vision, it was pointed out, speakers stressed that industries and projects with a higher growth potential had a higher chance of attracting investment. It was pointed out that the startups that had recently emerged and gained momentum for growth abroad were good examples for others, while mobility in game development was especially highlighted.

Investors stressed that the startups that closely follow developments in cybersecurity, financial technology, artificial intelligence (AI), internet of things (IoT), industry 4.0, and cloud-based solutions that have no growth potential in Turkey and the world have a significant chance.

Professor Deniz Tunçalp, General Manager of ITÜ ARI Teknokent, claimed the group had formed a school for both entrepreneurs and angel investors in order to nurture an entrepreneurial culture.

In his speech, Önal said that startups and innovative ideas would have a special place in Turkey's becoming more powerful in the economy and in the emergence of domestic and national success stories that could become world brands.

He stressed that these startups and innovative business areas would be a very important key to unlocking the road to 2023 targets. “I believe that entrepreneurship and entrepreneurs will play an important role in the future of our country. In the changing world and the economic order, we can see its concrete outputs,” Önal continued. “The traditional investor approach that focuses on the short term and tries to increase its investment in the short term is being replaced by a new generation of entrepreneurship based on innovation and differentiation. It has already happened.”
TL 24 MILLION IN TURNOVER

Önal further stated that they had improved the entrepreneurial ecosystem thanks to their collaborations with startups and continued to create economic benefits for both Turkey and the sector by supporting startups with innovative business ideas in the field of technology.

“In this context, we have provided close to $1 million in cash support to early-stage ventures within the scope of PİLOT, the first startup acceleration program launched in 2013 within the private sector, and successfully graduated 65 startups. Seventeen of these graduates had the opportunity to grow their innovative business ideas through investment. The startups we have supported provided employment for 280 people last year, generating a turnover of TL 24 million,” Önal explained.

Through the TT VENTURES, which they established to support the startups in the growth phase, Türk Telekom CEO stated that as the first corporate venture capital company of the sector, they continued to contribute to the entrepreneurship ecosystem with the investments made in various fields, adding that with the DoctorTurkey investment they made in early 2018 and the MentalUp and Eltemtek investments they made in this year, they contributed to the acceleration of digitalization processes of health, education and energy sectors.

Önal stated that the new generation of entrepreneurs is starting to think in the long-term, turning towards global targets that will ensure long-term success.

“There is no doubt that a huge responsibility falls on investors, who have to provide the knowledge and capital needed by startups. Innovative entrepreneurs with brilliant ideas, with the contributions of large companies, corporate venture capital companies and angel investors, can achieve the expected momentum and global success,” he noted.

“At Türk Telekom, we can show Argela, Innova and Sebit, who we supported by believing in them from the beginning -- right from the time they were an independent startup to when we incorporated them into our fold in 2007, as the best example of the outputs of our support to the startups. Today, these three subsidiaries concentrate on the sectors that shape Turkey's future in the convergence and information technologies, focusing on producing the technologies of the future and adding more value to Türk Telekom and Turkey every day,” he added.

Önal emphasized that Türk Telekom aims to create and expand an entrepreneurial culture in Turkey for a stronger and economically independent country.

The insurance sector is also supporting a new generation of technology startups. BNP Paribas Cardif Turkey, for instance, has launched the InsurTech Innovation Challenge Program in partnership with the Hackquarters team, one of the key stakeholders of the entrepreneurial ecosystem, within the scope of its innovative efforts supporting innovative solutions in the sector.

The program, which aims to strengthen a new generation entrepreneurs, also aims to encourage technological approaches in the field of insurance.

The top three ideas formed by startups operating in Turkey and beyond and working on insurance products and services, the Internet of Things, wearable technologies, mobility, customer acquisition, after-sales services, and business partnerships will find support through the program. Applications are being accepted until December 4, with the final decision announced at an event on December 19.