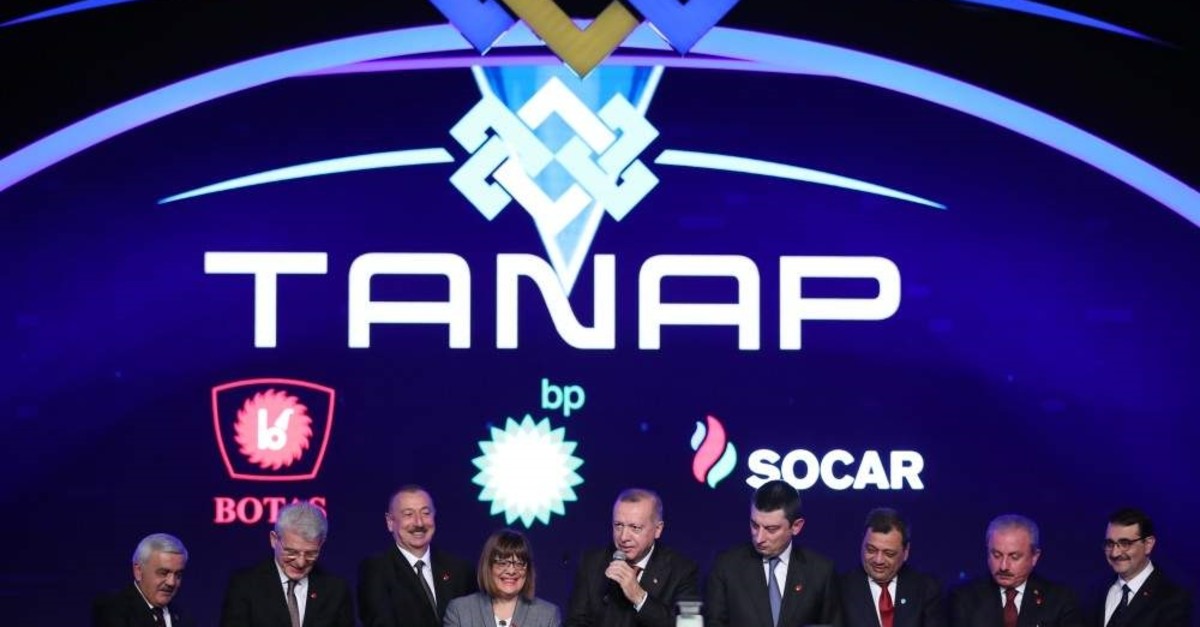 The Trans Anatolian Natural Gas Pipeline has sealed Turkey's central role in regional energy security with the successful connection of the line to the European section, ready to pump Azerbaijani gas to European markets directly for the first time

The Trans-Anatolian Natural Gas Pipeline (TANAP) has made history by becoming the first pipeline network to deliver natural gas from Azerbaijan through Turkey and on to Greece, the first stop in its European leg, the Trans Adriatic Pipeline (TAP).

"Today, we're are proud to complete a seven-and-a-half-year long, difficult process with ultimate success in the joint efforts of Turkey, Azerbaijan and Georgia," President Recep Tayyip Erdoğan said Saturday in an address at the inauguration ceremony for the TANAP-Europe connection held at the border city of Edirne.

Referring to TANAP, which launched in June 2018, as the backbone of the multinational Southern Gas Corridor (SGC) project, Erdoğan praised the project's completion and lauded the spirit of cooperation shown by partner countries which remained strong despite numerous hurdles.

Dubbed the "Silk Road" of energy, both TANAP and TAP constitute parts of the $8.5-billion Southern Gas Corridor (SGC), a multinational natural gas pipeline project supported by the European Commission and financed by the World Bank, European Bank for Reconstruction and Development (EBRD) and the Asian Infrastructure Investment Bank (AIIB).

"The rich natural resources we possess can now be shared with the people of other nations in the region," Erdoğan said, adding that "TANAP does not only guarantee Turkey's energy security, but aims to bolster the energy supply security of European countries as well."

The 3,500 kilometers-long SGC consists of three sections: the South Caucasus Pipeline, TANAP and TAP. The Turkish leg of the project TANAP passes through around 600 villages before it reaches the border, where it will go on to pump energy to European markets. So far, TANAP has delivered nearly 3.4 billion cubic meters of natural gas to the Turkish network.

The 4.5 billion euro ($5.1 billion) TAP pipeline will traverse Greece and Albania before plunging into the Adriatic Sea on the way to Italy. Azerbaijani gas is expected to reach European markets by the second half of next year and currently, more than 90% of the project has been completed.

The 1,850 kilometers-long TANAP carries Azerbaijani gas from the Shah Deniz-2 field and other fields in the southern Caspian Sea to Turkish, Georgian and European markets. While Turkey receives 6 billion cubic meters of gas, an additional 10 billion cubic meters will be transferred to the European gas network.

TANAP: an energy project for peace

Drawing attention to the significance of energy supply security internationally, the Azerbaijani president indicated that the TANAP had a mediatory function, encouraging cooperation between nations based on shared energy goals.

"We cannot see TANAP and the SGC as purely energy infrastructure projects. These projects pave the way for other cooperation mechanisms and platforms. Our energy projects have already spawned more others that contribute to the regional development and stability," Aliyev said.

The Azerbaijani president also drew attention to another significant energy project jointly accomplished by Turkey and Azerbaijan. Speaking of the Baku-Tbilisi-Ceyhan (BTC) oil pipeline – delivering Azeri oil to Turkey and global markets, Aliyev stressed the importance of the energy project for the supply security of global buyers.

Operating since 2006, the BTC has delivered more than 450 million tons of Azeri oil in addition to the crude of other countries in the region. In an elaboration of how BTC functions as an opening gate for other suppliers, he noted that 27 million tons of Turkmenistan oil has been exported to the global markets via the BTC. While 12 million tons of Kazak oil has flown through the BTC, 7 million tons of Russian crude oil has also reached global markets so far. "The BTC has become an excellent energy infrastructure project for the other oil producers," Aliyev remarked.

About events in the Eastern Mediterranean, where disputes have surfaced regarding oil exploration rights, Erdoğan emphasized that certain regional actors were striving to fuel the tension rather than working on ensuring a fair share of the hydrocarbon resources in the region.

"Threatening talk and blackmail-like policies have come to the fore when there is a chance for an equitable sharing of resources. Yet, no country is above international law. It needs to be recognized that no party can reach a result by taking an issue as a fait accompli," Erdoğan said.

The president further stressed that Turkey would never allow any state to disregard the sovereign rights of the Turkish people and those of Turkish Cypriots. He claimed that it would not be possible to carry out any projects that exclude Turkey, given the country presides over the longest coastline in the Eastern Mediterranean.

Two Turkish drilling vessels, the Fatih and the Yavuz, along with the country's two other seismic vessels, are currently conducting exploration operations in the region. "Our drilling operations will become a source of peace and prosperity. Therefore, I call on all parties in the Eastern Mediterranean to make energy a grounds for cooperation, not an instrument of conflict," Erdoğan said.

Turkey, as a guarantor nation to the Turkish Republic of Northern Cyprus (TRNC) and supporter of its right to Eastern Mediterranean resources. Greek Cyprus has unilaterally declared a total of 13 what it refers to as the parcels of the Eastern Mediterranean as its Exclusive Economic Zone (EEZ) and allowed international oil and drilling companies to operate in these areas, which are anticipated to hold rich hydrocarbon reserves.

"The 1,850-kilometer Anatolian journey of TANAP has ended today and the gas' European journey begins," Energy and Natural Resources Minister Fatih Dönmez in his speech at the ceremony.

"We are now ready for the gas flow to Europe. From here on in, we entrust the project to our European friends," Dönmez added. The minister emphasized that TANAP will meet the strength of the Turkey-Azerbaijan cooperation with new countries and new people. "TANAP is not just an energy project, it is a story of success. This project is vital not only for Turkey's but for Europe's energy supply security as well," the minister stressed, adding that it will have a major contribution to the energy future of both Turkey and Europe.

Dönmez stressed that thanks to TANAP, Turkey would now be left with no energy supply problem, indicating that Turkey would move forward with more gas investments on its path of becoming an energy hub. He underscored that Turkey would pursue win-win oriented energy policy and that its energy diplomacy aimed to boost regional prosperity.

After the completion of the construction of TAP, Azerbaijan's gas will be transmitted directly from the Caspian Basin to the European markets for the first time in history, said SOCAR President and TANAP Chairman of the Board Rovnag Abdullayev. "Thus, in addition to being Europe's new gas supplier, we aim to become Turkey's second-largest gas supplier," he noted.

Norway came second among European gas suppliers with a share of 29.6%, followed by Algeria with 11%. Qatar accounting for 7.2% and Nigeria providing 4.1% of overall EU gas imports in the first half of the year. The U.S., Trinidad and Tobago and Libya had a share of 3.4%, 1.9% and 1.4% respectively.

TANAP General Manager Saltuk Düzyol told reporters at the inauguration ceremony that there were nine buyers ready to obtain gas from the pipeline.

"We are aiming to deliver the natural gas produced in Azerbaijan's Shah Deniz-2 field to the European markets through a 3,500-kilometer-long pipeline. As of today, we are ready to transfer the gas to Europe," Düzyol said.

The Trans Adriatic Pipeline system must be fully completed to ensure uninterrupted gas supply to European markets, he said. "As of this week, we have pumped gas into TAP for initial tests. Right now, 5 kilometers of TAP until the Greek border is full of Azeri gas. And on the Greek side, 2 kilometers of the pipeline has the gas," the said and noted that the total amount of gas on the TAP is currently at 256,000 cubic meters.

The TANAP general manager once again stressed the significance of the project for the energy supply security of Turkey and Europe.

He further remarked that TANAP solidifies Azerbaijan's economic and political relationship with the EU and further emphasized that the project also highlights Turkey's position as an important energy trade hub in its region.

"The project plays a significant role in decreasing European Union's dependence on a single supplier for a large amount of gas consumption," Düzyol said and continued, "Currently, there are nine buyers of this gas in Europe with French, Italian, German and Spanish companies. We cannot think that only three European countries – Italy, Albania and Greece – will be the sole consumers of this gas in the Southern Gas Corridor.

It is very much possible that Bosnia-Herzegovina, Montenegro and Croatia will be the future consumers of the Azeri gas in the coming years, he claimed. "The big buyers of the gas flowing through TANAP and TAP will be able to sell this commodity to other countries through swap agreement," he explained.