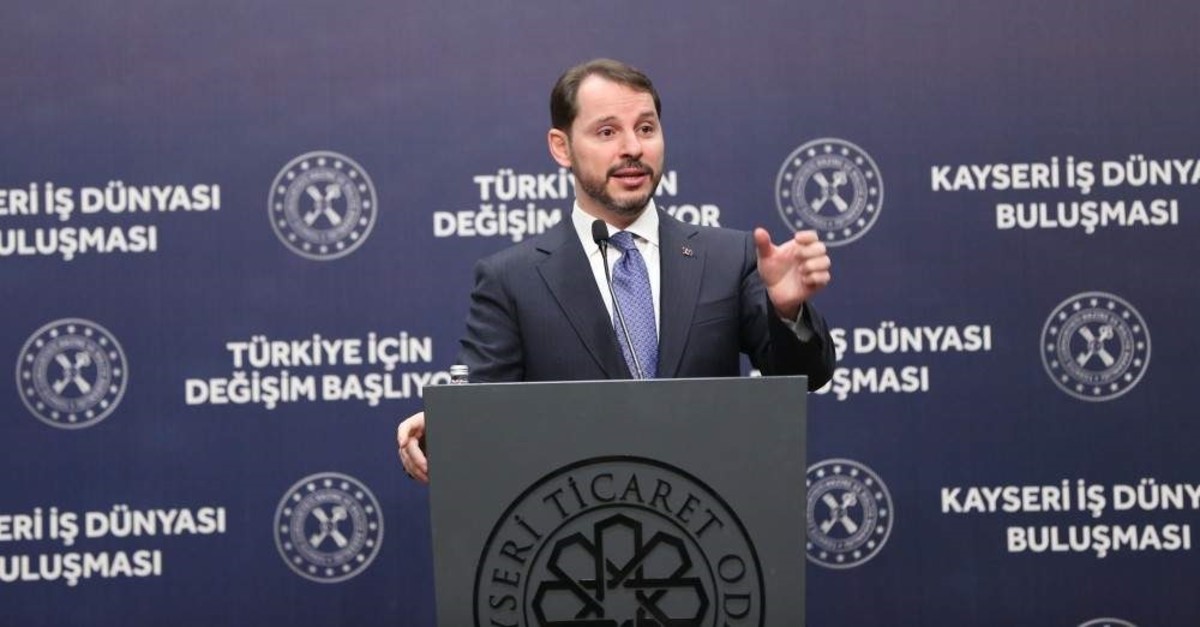 Parallel to the significant improvement in inflation dynamics throughout this year, Turkey has also seen a strong recovery in interest rates, eliminating the pressure on the markets, Finance Minister Berat Albayrak said

Turkish public lenders will lower their interest rates to single digits before 2020, the treasury and finance minister said Friday.

Berat Albayrak’s remarks come after Turkey’s Central Bank (CBRT) on Thursday cut its key benchmark policy rate – the one-week repo rate – by 200 basis points to 12% at its last rate-setting meeting of the year.

“We have seen a performance where interest rates decreased by half in a very short time,” Albayrak told a meeting with businesspeople in the central Anatolian province of Kayseri, pointing out that the central bank has slashed its rates by 1,200 basis points at four meetings in five months.

“Both the realistic monetary policy of the central bank and the strong stance of the state banks alongside the producers have eliminated the interest rate pressure on the markets,” he noted.

Thanks to the significant improvement in inflation dynamics, the central bank is said to have become more confident about the strength of disinflation and implemented a deeper-than-expected easing cycle since July.

After having raised the key rate to 24% in September last year in the face of rising inflation, the bank has cut the rate a total 1,200 basis points since it kicked off an easing cycle in its monetary policy as of July.

The easing cycle led public lenders and some private banks to lower interest rates on housing, consumer and corporate as well as automotive loans as of the beginning of August to spur domestic demand and support the recovery in the economy.

On Thursday, the central bank said the current monetary policy stance is considered to be consistent with the projected disinflation path, also noting that the recovery in macroeconomic indicators supports the fall in the country risk premium and contributes to a benign outlook in cost factors.

The bank highlighted that its cautious monetary stance will continue to keep the disinflation process on track with the targeted path.

Having had been a pressing issue for the Turkish economy over the last year, consumer prices dropped significantly throughout this year after topping 25% in September last year amid high fluctuations in exchange rates.

As expected, it reverted to double-digit territory and rose in November, however, less than market consensus. It rose to 10.56% year-on-year last month due to waning of a so-called base effect, according to the Turkish Statistical Institute (TurkStat).

“God willing, we are entering a period in which we will close this year with inflation below 12% and within all of this scope make single-digit inflation permanent as of next year,” Albayrak said.

INDUSTRIAL OUTPUT UP IN OCTOBER

The mitigating inflationary pressure, the stabilized Turkish lira, the uptick in industrial output and the reformative agenda of the government have rendered the expectations for the Turkish economy’s 2020 performance from contraction to positive growth.

Albayrak further said leading indicators point to a strong continuation of normalization in the economy and give a clue about 2020.

Industrial production, a significant gauge of the economic growth trend, expanded by 3.8% year-on-year in October, according to TurkStat data on Friday, the second consecutive rise.

The country’s calendar-adjusted industrial production index reached to 120, the statistical body said. In the month, all sub-indices posted increases on a yearly basis, it noted. The mining and quarrying index increased by 6.5%, while the manufacturing index rose by 3.7% and the electricity, gas, steam and air conditioning supply index went up by 1.2%.

Evaluating the data Friday, Industry and Technology Minister Mustafa Varank said the increase of the industrial output continues, noting that the strong performance in energy, intermediate goods and capital goods sectors has affected the rise.

The calendar-adjusted industrial output soared 3.4% in September year-on-year, registering an annual rise for the first time since August 2018.

Turkey’s economic confidence index rose to 91.3 in November on a monthly basis, TurkStat data shows. The figure rose 1.7% from 89.8 in October. Consumer, real sector and services confidence indices increased to 59.9, 105.9 and 91.3, respectively, in November, the data showed.

“Every rise in confidence in the economy makes a significant contribution to Turkey’s re-entry into the potential growth path and revival of economic activities in all sectors,” said Albayrak.

The minister also pointed to the improvement in the country’s current account balance, stressing that the country has come to a position where it posts surplus and not a deficit.

Having long had a large current account deficit, Turkey has been enjoying a significant improvement in its external balances in recent months mainly thanks to a sharp decline in imports.

The 12-month current account balance turned to a surplus in June for the first time in nearly 17 years and has remained positive since. The CBRT’s balance of payment figures Wednesday showed the country’s 12-month rolling surplus amounted to $4.33 billion in October. The month marked the fifth consecutive month in which the annualized current account posted a surplus.

With the measures taken over the last year, the improving tourism sector and decreasing imports, the annual current account deficit has gradually declined from about $58 billion in May of last year. The balance ended 2018 with a deficit of $27.6 billion, improving from a nearly $47.5 billion deficit the previous year.

As one of the main instruments that support this development, Albayrak pointed to the Advanced, Productive, Indigenous, Industry (İVME) Financing Package the government launched in May to support export-oriented sectors.
The minister said the package has so far provided TL 40 billion to 50,000 enterprises as of the end of November. After three consecutive quarters of contraction that followed turmoil and high volatility in exchange rates as of the second half of last year that pushed up inflation and interest rates while domestic demand tumbled, the Turkish economy has entered a promising era of growth in the third quarter of this year.

The economy grew 0.9% in the third quarter of this year compared to the July-September 2018. In 2018, the economy posted an annual growth of 2.8%, narrowing in the last quarter. The average estimates for the fourth quarter of the year are 4.5% to 5%. The overall annual growth forecasts vary between 0.3% and 0.6%.

According to Turkey's new economic program for 2020-2022 unveiled by Albayrak in late September, the government expects a 5% annual economic growth for each of the next three years.