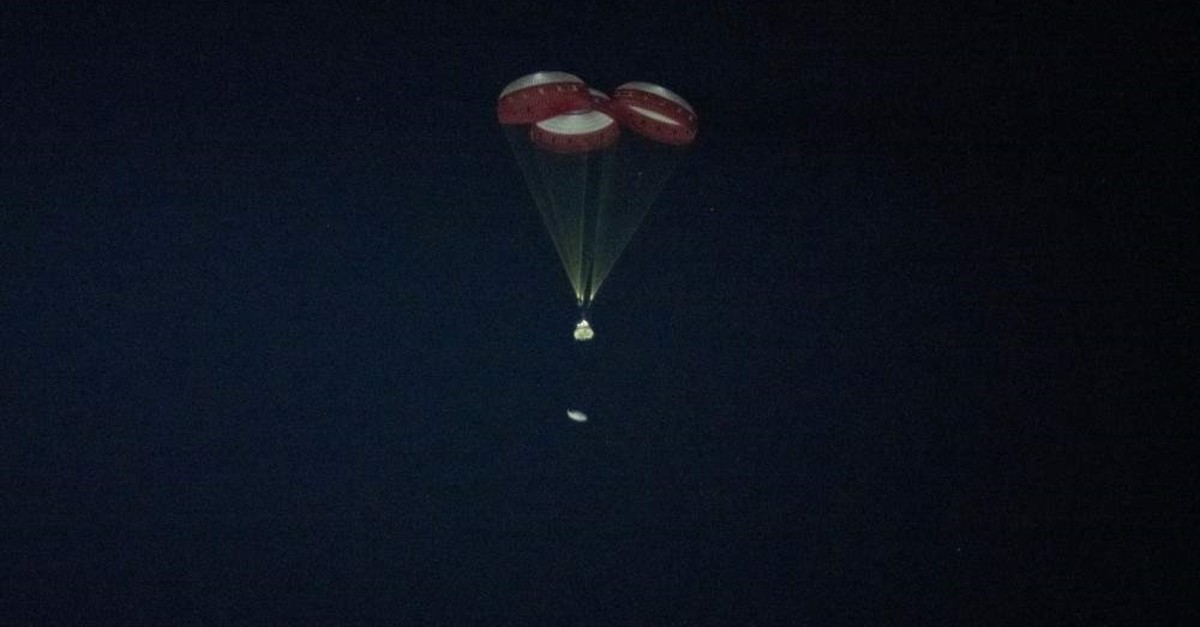 Boeing safely landed its crew capsule in the New Mexico desert Sunday after an aborted flight to the International Space Station that threatened to set back the company's effort to launch astronauts for NASA next year.

The Starliner descended into the Army's White Sands Missile Range in the frigid predawn darkness, ending a two-day demo that should have lasted more than a week. All three main parachutes popped open and airbags also inflated around the spacecraft to ease the impact.

A test dummy named Rosie the Rocketeer — after Rosie the Riveter from World War II — rode in the commander's seat. Also returning were holiday presents, clothes and food that should have been delivered to the space station crew.

After seeing this first test flight cut short and the space station docking canceled because of an improperly set clock on the capsule, Boeing employees were relieved to get the Starliner back.

Recovery teams cheered as they watched the capsule drift down through the air and make a bull's- eye landing. The touchdown was broadcast live on NASA TV; infrared cameras painted the descending capsule in a ghostly white.

As the sun rose, close-up views showed the large white and black capsule upright — with hardly any scorch marks from re-entry — next to a U.S. flag waving from a recovery vehicle. The astronauts assigned to the first Starliner crew — two from NASA and one from Boeing — were part of the welcoming committee.

It was the first American-made capsule designed for astronauts to make a ground landing after returning from orbit. NASA's early crew capsules — Mercury, Gemini and Apollo — all had splashdowns. SpaceX's Dragon capsule, which made its orbital debut last winter, also aims for the ocean at mission's end.

Minutes after touchdown, top NASA and Boeing officials poured into Mission Control in Houston to congratulate the team.

The capsule's first trip to space began with a smooth rocket ride from Cape Canaveral on Friday. But barely a half hour into the flight, it failed to fire its thrusters to give chase to the space station and ended up in the wrong orbit.

The problem was with the Starliner's internal clock: It did not sync up with the Atlas V rocket, throwing off the capsule's timing.

The capsule burned so much fuel trying to orient itself in orbit that there wasn't enough left for a space station rendezvous. Flight controllers tried to correct the problem, but between the spacecraft's position and a gap in communications, their signals did not get through. They later managed to reset the clock.

Boeing is still trying to figure out how the timing error occurred. The mission lasted nearly 50 hours and included 33 orbits around the Earth.

Last month's parachute problem turned out to be a quick fix. Only two parachutes deployed during an atmospheric test because workers failed to connect a pin in the rigging.

NASA is uncertain whether it will demand another test flight from Boeing — to include a space station visit — before putting its astronauts on board. Boeing had been shooting for its first astronaut mission in the first half of 2020. This capsule is supposed to be recycled for the second flight with crew; each Starliner is built to fly in space 10 times.

Despite its own setbacks, SpaceX remains in the lead in NASA's commercial crew program.

If a launch abort test goes well next month, SpaceX could start launching NASA astronauts by spring and end a nearly nine-year gap in flying people from Cape Canaveral.

As its space shuttle program was winding down, NASA looked to private industry to take over cargo and crew deliveries to the space station. SpaceX kicked off supply runs in 2012. Two years later, NASA hired SpaceX and Boeing to ferry astronauts to the orbiting lab.

The goal was to launch NASA astronauts by 2017.

Because of delays, NASA is looking to buy another two seats on Russian rockets in 2020 and 2021 to guarantee a continuing U.S. presence on the space station. Even when private companies are regularly carrying up astronauts for NASA, the space agency always will reserve a seat for a Russian in exchange for a free U.S. seat on a Soyuz.

Over the years, these Soyuz rides have cost NASA up to $86 million apiece, with the tab totaling in the billions.

An audit last month by NASA's inspector general found a Starliner seat will cost slightly more than that, with a Dragon seat going for just over half the price.