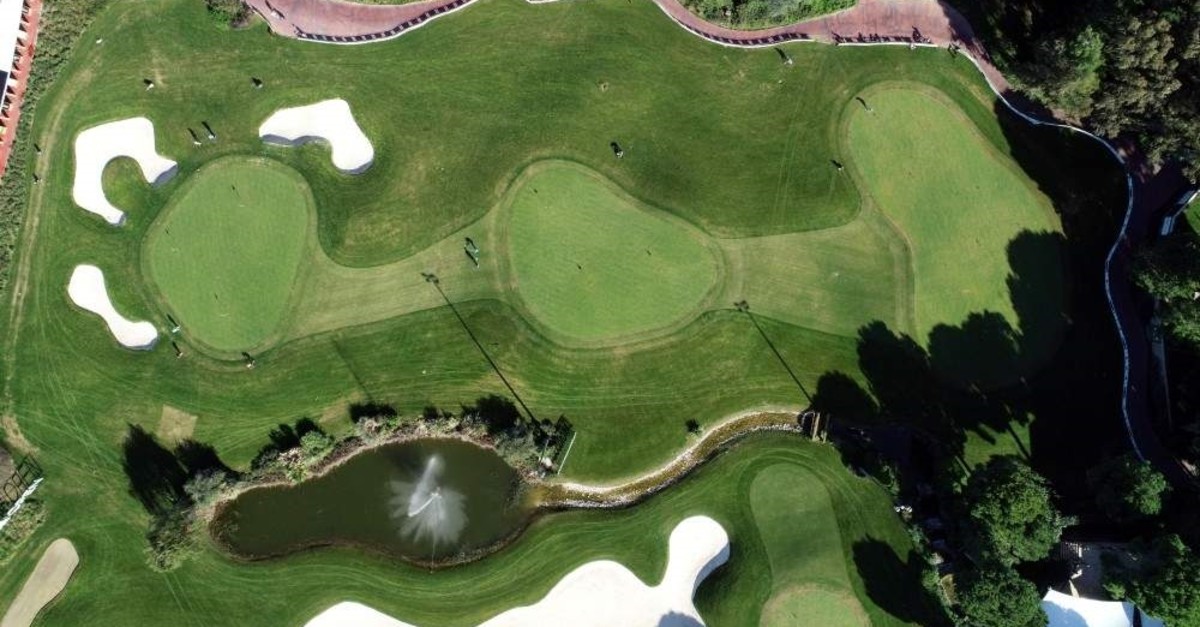 Mediterranean resort province Antalya has 17 world-class golf courses and hosts 150,000 people from 30 countries in some 560,000 games a year. (AA Photo)
by Daily Sabah with AA Dec 23, 2019 6:38 pm
Famous for its long beaches and world-class holiday resorts, the province of Antalya on Turkey's Mediterranean coast has succeeded in positioning itself as a golfing destination of the highest standards. The province is now seeking to build upon this success by attracting more golfers, especially those who favor Spain and Portugal in particular.

Every year, thousands from Europe, Asia and the U.S. head to the Belek Tourism Region in Antalya, which has become one of the world's most popular destinations for golf tourism thanks to its beautiful climate and high-class golf courses.

Cahit Şahin, chairman of the Turkey and Antalya Golf Specialized Sports Club and the International Association of Golf Tour Operators, told Anadolu Agency (AA) Monday that the 17 world-class courses that make up the Belek Tourism Region welcome 150,000 visitors from 30 countries every year,

Noting that Antalya – the Belek region in particular – had the ideal climate for golfing tours, Şahin said: "We have even started to attract customers from our rivals, Spain and Portugal."

Highlighting Belek's rise to prominence as a golfing destination in recent years, Şahin stated that various tournaments, especially the Turkish Airlines Open 2019 Golf Tournament, had boosted the recognition of the region's courses.

Şahin stated that a total of 76 athletes from 28 countries arrived in Belek to compete in the Turkish Airlines Open 2019 Golf Tournament and that many athletes arrived to check out the quality of the facilities outside the tournament season, too. Noting that the bulk of golfers frequenting the area arrived from Germany, the U.K., the U.S. and Scandinavia, Şahin added that many more had begun to arrive from Japan, China and South Korea, as well.

Emphasizing that golf made a significant contribution to tourism, Şahin stated that Spain and Portugal had 5.5 billion euros ($6.09 billion) in tourism revenues thanks to 300 golf courses. Plus, the official added, the general profile of golfers adds to the revenue picked up, stating: "An income of about 1,500 euros is spent per person in the peak season and about 1,000 euros in the low season."

"We have guests who come to Belek only for golf; they stay at the hotel for seven days and play golf for five days. Antalya needs to get a larger share of golf tourism. There are around 65 million golfers in the world. Of that, 30 million live in the Americas, 15 million live in Asia, and the rest in Europe. Given this crowd travels twice a year, there is serious potential. There has been an increase of around 40% in the number of our guests compared to previous years," he explained, continuing: "We have started attracting customers from our competitors, Spain and Portugal. Even though we are a small region, we are under the observation of our competitors."

According to Şahin, the International Association of Golf Tour Operators (IAGTO) cited the Belek region as a zone open to development for golf. "Spain and Portugal are now eyeing us to see what is happening in Belek, Antalya," he said.
RELATED TOPICS