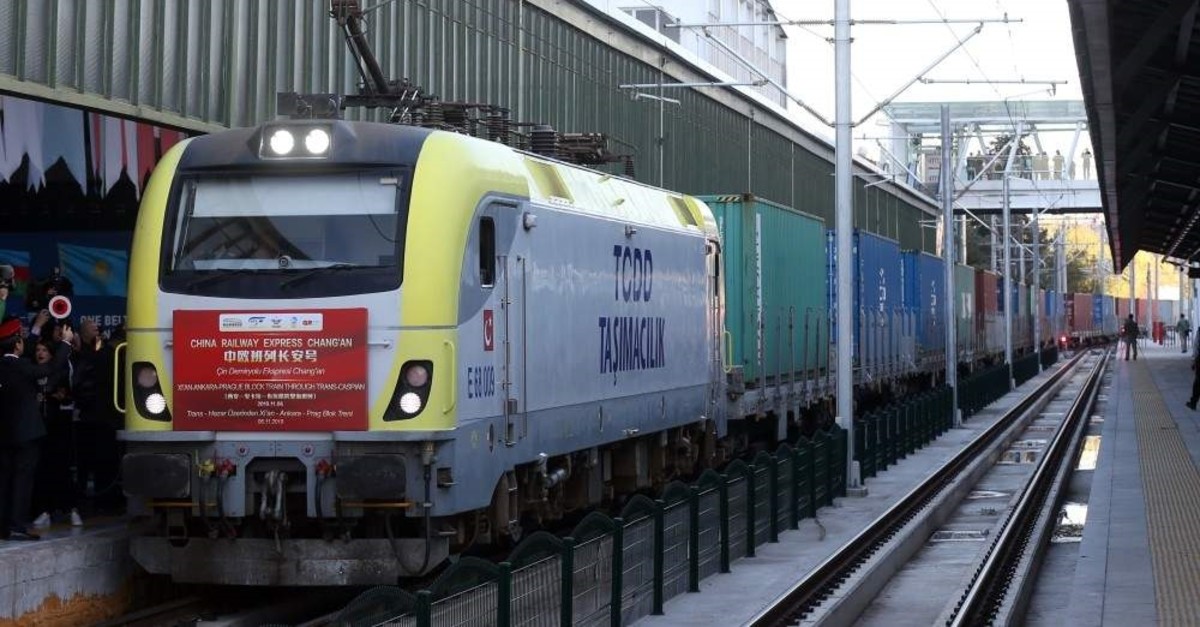 The first Chinese freight train carrying export goods to Europe passed through Istanbul's Marmaray for the first time on Nov. 6, realizing the dream of the Silk Railway. (AA Photo)
by Daily Sabah with AA Dec 23, 2019 4:40 pm

Turkey is planning to send a train carrying Turkish goods to China as part of efforts to utilize the railway connection to increase the trade volume between the two countries, Turkish State Railways' (TCDD) chief said Sunday.

TCDD General Manager Ali Ihsan Uygun said Turkish and Chinese officials are in talks to activate the Middle Corridor line and create new opportunities for Turkish businesses seeking to export to China within the scope of the Belt and Road Initiative (BRI).

In November, the first train that departed China for Europe passed below the Bosporus via Istanbul's Marmaray tunnel for the first time, marking the realization of the "Silk Railway" dream. China's Railway Express will directly connect Czech Republic's Prague to Xian, the capital city of Shaanxi Province in central China, via Turkey.

Turkey is now aiming to increase its trade volume with China and create new opportunities for Turkish exports by making the best of its position in the Middle Corridor stretching from Beijing to London and the Iron Silk Road, a rail track that extends from Kazakhstan to Turkey.

Uygun said they have conducted negotiations with countries connecting the Iron Silk Road to increase both freight traffic and cargo weight. "In order for Turkey to export its products, the Iron Silk Road, which we call the Middle Corridor, needs to be fully operational."

Uygun said they have finalized the plan of sending freight trains carrying Turkish exports from different sectors to China after finalizing the negotiations with partner countries. He added that the TCDD is also cooperating with the private sector for the project.

The number of Europe-bound trains from China is expected to rise to more than 300 in 2020 and reach 1,000 in the next four years, Uygun said after his meetings with Chinese officials last week.

He said the China Railway Express's use of Turkish railways should not only be considered in relation to transit.

"It means having the logistic capabilities to deliver goods produced by small- and medium-sized businesses to markets as far as China," he said.

Turkey is set to gain the most from the BRI, a trillion-dollar infrastructure development project addressing the potential of 3 billion people across 65 countries thanks to its geographical position. Located in the Middle Corridor of the project, Turkey connects Beijing and London in the most cost-effective way.