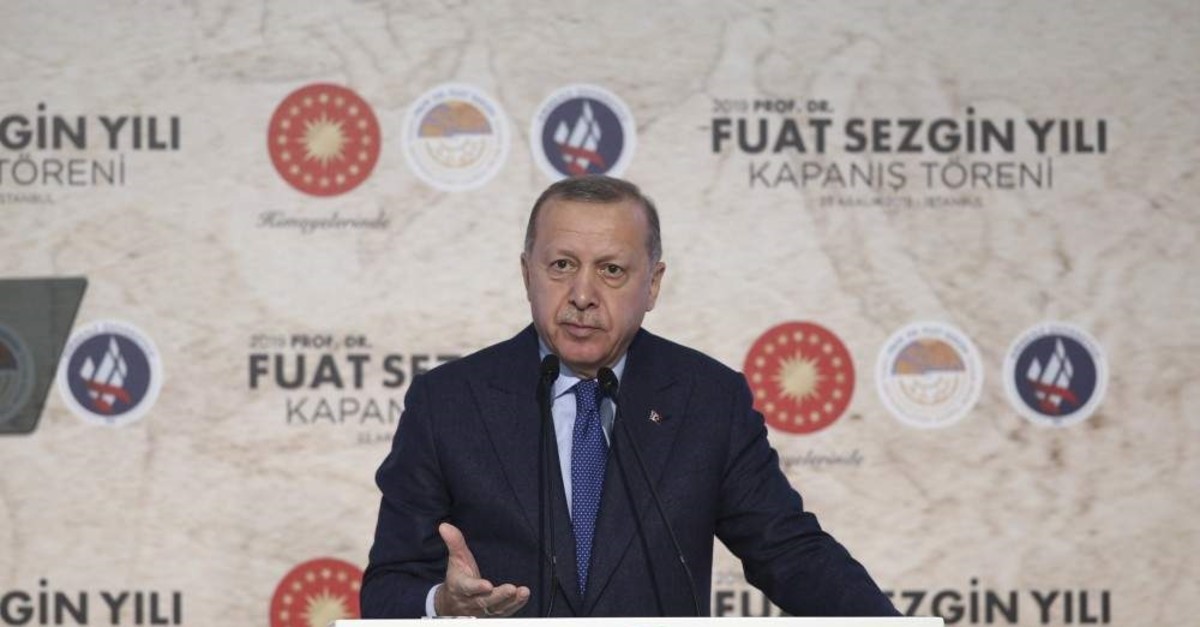 President Recep Tayyip Erdoğan said Monday that finishing the artificial sea-level waterway Kanal Istanbul project will reveal the burden of the 1936 Montreux Convention, which allows foreign merchant vessels to pass through the Turkish straits with a minimum fee.

Speaking at the closing ceremony of Professor Fuat Sezgin Year in Istanbul, Erdoğan said the government is determined to finish Kanal Istanbul and criticized the opposition for trying to block private contractors from joining the project.

The planned Kanal Istanbul megaproject got the environmental green light Monday. The Environment and Urbanization Ministry gave the approval in a report submitted over a year after environmental impact assessments and survey work were finished in August 2018.

The report will be presented for public comment for 10 days at the ministry and the Istanbul Provincial Environment and Urbanization Directorate.

The massive infrastructure development project, originally announced by Erdoğan in 2011, aims to reduce pressure on the Bosporus – one of the world's busiest maritime passages – and play a significant role in preventing vessel accidents and minimizing risks and dangers, particularly those associated with tankers. The canal will link the Black Sea and the Sea of Marmara, north and south of Istanbul, becoming an alternative for the global shipping lane.

The president said that the project's aim is to increase the security of the Bosporus and mentioned the MT Independenta incident as one of the consequences of Turkey's inability to regulate the strait's shipping traffic. In 1979, the MT Independenta, a large Romanian crude oil carrier, collided with a Greek freighter at the southern entrance of the Bosporus and exploded. Almost all of the tanker's crew members died. The wreck of the Independenta burned for weeks, causing heavy air and sea pollution in the Istanbul area and the Marmara Sea.

The last major accident in the strait was in 2003 when a Georgian-flagged vessel ran aground, resulting in a spill of 480 tons of oil.

"What have Turkey's gains and losses been from the Montreux Convention? We will show that by finishing the Kanal Istanbul," Erdoğan said.

Since the 1936 signing of the Montreux Convention, the legal instrument governing the regime of the straits, the size and capacity of the ships have grown enormously, raising major safety concerns.

According to the Montreux Convention, merchant vessels enjoy freedom of passage through the Turkish straits while passages of vessels of war are subject to some restrictions, which vary depending on whether or not these vessels belong to Black Sea riparian states. Vessels of war belonging to non-riparian states are subject to specific restrictions, including limits on the maximum aggregate tonnage and duration of stay in the Black Sea. Combat ships of non-Black Sea countries may not stay in the Black Sea for more than 21 days, and the combined tonnage of one country's ships may not exceed 30,000 tons.

The maritime statistics of the Transportation and Infrastructure Ministry showed 85,102 vessels passed through the straits of Istanbul and Çanakkale last year. In 2017, Turkey earned TL 312 million from the pilotage and lighthouse services provided for the transit vessel passages.