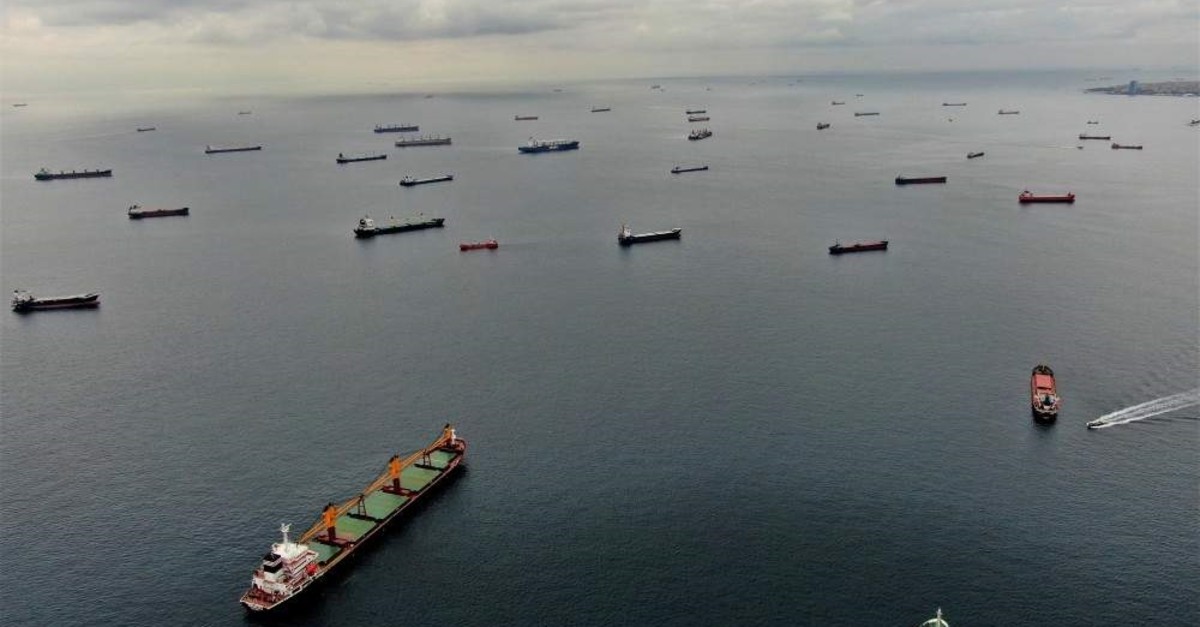 The Kanal Istanbul project, the hottest topic on the Turkish agenda nowadays, aims to reduce the vessel traffic in the Bosporus and offer easier passage for merchant vessels

The artificial sea-level waterway Kanal Istanbul will offer important advantages as an alternative for ships seeking to pass straight through the Bosporus without waiting, in contrast to the current long wait times caused by intense ship traffic, the country's environment and urbanization minister said Thursday.

Ships are waiting close to 14 hours to pass through the Bosporus, according to an average in this year’s data. Waiting time for ships carrying dangerous loads such as tankers reaches 30 hours,” Murat Kurum told a news conference in the capital Ankara.

Kurum also pointed to the financial burdens that occur due to waiting. “According to 2017 figures, economic losses arising from the waiting periods tankers faced reach millions of dollars. A daily rental loss of tankers over 200 meters in length reaches $120,000 on average. Under favorable conditions, a ship of a length of over 200 meters passes through the Bosporus strait in about one and a half hours,” said the minister. Considering the waiting periods, there is a significant increase in the total transit costs, Kurum noted. “This will encourage ships to prefer Kanal Istanbul,” he added.

The minister also said the size of the project would be around 75 billion Turkish liras, adding that the government will make necessary evaluations and decide on the most proper financing model for the project.

The massive infrastructure development project, originally announced by President Recep Tayyip Erdoğan in 2011, aims to reduce pressure on the Bosporus – one of the world's busiest maritime passages – and play a significant role in preventing vessel accidents and minimizing risks and dangers, particularly those associated with tankers. The canal will link the Black Sea and the Sea of Marmara, north and south of Istanbul, becoming an alternative for the global shipping lane.

On Monday, Erdoğan said that finishing the artificial sea-level waterway Kanal Istanbul project will reveal the burden of the 1936 Montreux Convention, which allows foreign merchant vessels to pass through Turkish straits with a minimal fee.

Since the 1936 signing of the Montreux Convention, the legal instrument governing the regime of the straits, the size and capacity of the ships have grown enormously, raising major safety concerns.

According to the Montreux Convention, merchant vessels enjoy the freedom of passage through Turkish straits, while vessels of war are subject to some restrictions, which vary depending on whether or not the vessels belong to Black Sea riparian states. Vessels of war belonging to non-riparian states are subject to specific restrictions, including limits on the maximum aggregate tonnage and duration of stay in the Black Sea. Combat ships of non-Black Sea countries may not stay in the Black Sea for more than 21 days, and the combined tonnage of one country's ships may not exceed 30,000 tons.

The maritime statistics of the Transportation and Infrastructure Ministry showed 85,102 vessels passed through the straits of Istanbul and Çanakkale last year. In 2017, Turkey earned TL 312 million from the pilotage and lighthouse services provided for the transit vessel passages.

Kurum also stressed that the Environmental Impact Assesment Report on the Kanal Istanbul project was sedulously prepared, and the project will be carried out with due diligence in regard to all of the environmental concerns.

He confirmed that the loss of water from a local dam will be compensated by a new dam and water supply projects. “During the environmental impact assessment, we have conducted a series of meetings with universities, nongovernmental organizations and environmental experts to carry out the project in the best way to preserve the environment, flora and fauna, and ecological balance of Istanbul,” Kurum said. The Environment and Urbanization Ministry gave the approval in a report submitted over a year after environmental impact assessments and survey work was finished in August 2018. The report was prepared by the approval of 200 scholars.

The report will be presented for public comment for 10 days at the ministry and at the Istanbul Provincial Environment and Urbanization Directorate.