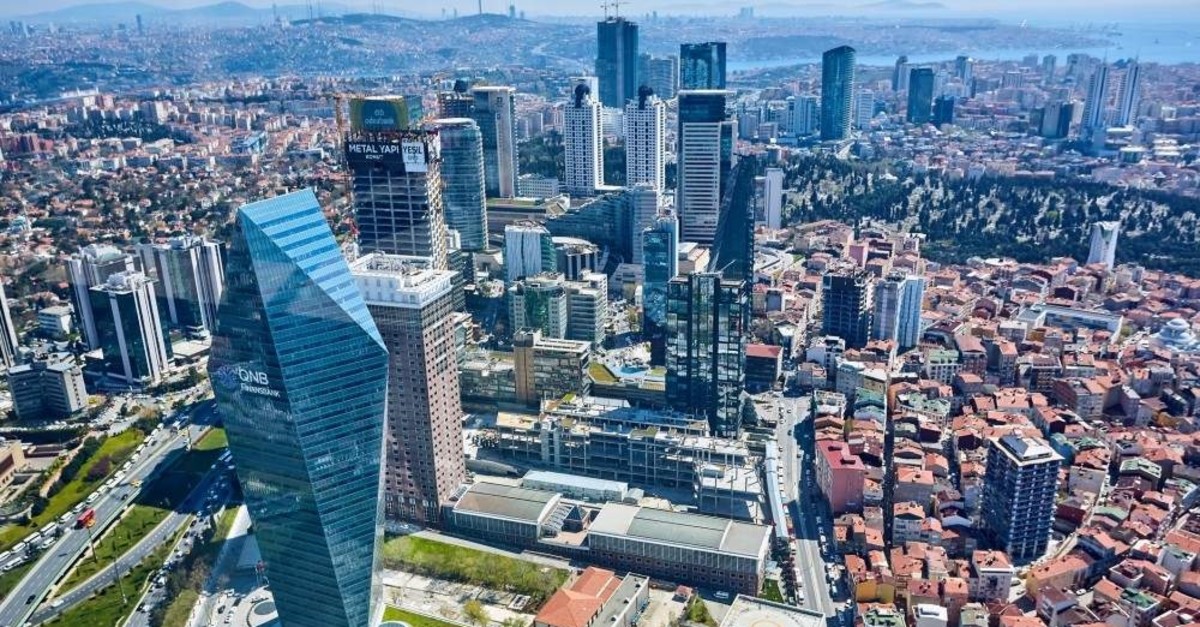 Having reentered a potential growth path as it heads into 2020, Turkey looks to sustain positive growth and, among other things, keep inflation under control. The country is also one of the main candidates set to benefit from the trend of easing monetary policies of major central banks that could bring in greater foreign capital

With plenty to worry about as it crossed into 2019, the global economy, now heading into 2020, could be on a path to recovery, particularly on the back of the synchronous easing of trade tensions between the world's two biggest economies and uncertainties over the U.K.'s divorce with the EU in recent weeks.

Although some of the worst fears didn't come to pass, growth in major economies fell short of expectations.

For Turkey, the economy began rebalancing in 2019 after losing momentum in the second half of 2018 due to turmoil and high volatility in exchange rates that pushed up inflation and interest rates while domestic demand tumbled. The country reentered the path to growth in the third quarter of this year thanks to steps toward balancing implemented by the economic administration and strong synergy between the government and private sector. Heading into 2020, both the business world and analysts expect a more positive picture and expect 2020 to be a year of transition into positive and strong growth.

Looking back at 2019, in which cyclical political movements were watched and geopolitical risks dominated the agenda, markets and economic decisions were generally affected by the desire to dominate the economic system that underlies political conflicts between the countries and the developments that emerged, namely trade wars.

Brexit developments were also closely monitored in 2019. What's more, the lack of desired recovery in the European economy and political uncertainties in multiple countries, including Italy, Spain and the U.K., triggered increased concerns over a slowdown in the global economy.

But the easing monetary policies of the major central banks around the world, a policy spearheaded by the U.S. Federal Reserve (the Fed) and the European Central Bank (ECB), to support the activity reduced the risks related to the economy.

These also boosted hopes for increasing capital inflow to the emerging markets, and Turkey is often cited among the beneficiaries of this trend that is expected to continue throughout 2020.

In line with this, 2019 was similarly a year for the Turkish economy in which external developments stood out rather than domestic developments, as was the case in most countries due to the domino effect brought about by globalization.

Within the framework of external risks and domestic developments, the economic administration managed to prevent further disturbances in the economy through the measures it announced and the reforms it implemented throughout the year.

Thus, 2019 was a year that saw inflation drop from around 20% to single digits, a transition from recession to growth again, all-time high numbers in exports and a year in which record-breaking current account surpluses were observed.

Inflation had become a pressing issue for the economy since the second half of 2018 when it surged to almost 25% in September as steep depreciation in the Turkish lira pushed up the price of imported goods.

It dropped significantly throughout 2019, falling from 20.3% in January. It eased to 9.26% in September when it hit single digits for the first time since July 2017 before dropping to 8.55% in October, its lowest since December 2016.

As expected, the consumer prices index reverted to double-digit territory and rose in November, however, less than market consensus. It rose to 10.56% year-on-year in the month due to waning of a so-called base effect.

The economists also forecast that Turkey's year-end annual inflation would be 11.99% on average, with predictions varying between 10.70% and 12.52%.

Among others, Turkey replaced the previous governor of the Central Bank of the Republic of Turkey (CBRT), Murat Çetinkaya, in July with the bank's deputy governor, Murat Uysal.

The bank began aggressively lowering rates in July, after having raised the key rate to 24% in September 2018 in the face of rising inflation. It cut the main policy rate by 12% between July and December to 12%. And more rate reductions are likely in the coming year.

In addition to rate cuts, the bank also came forth with repo and swap auctions as well as reserve requirement regulations, seeking to boost support for the financial markets, revitalize lending and further revive economic growth.

As the real interest rates narrowed after the CBRT's interest rate cuts in recent months, Güzeloğlu was cited as saying by Anadolu Agency (AA) that a gradual reduction is expected in interest rates as the inflation outlook and country risk premium improve.

"As we anticipate that inflation will decline to single-digit figures at the end of next year, we think the CBRT policy rate will be reduced in parallel steps in the year," he added.

Güzeloğlu underscored that the policy stances of the Fed and ECB, which eased their monetary policies in 2019, have pointed to supportive approaches in 2020 as well. This situation, he continued, shows that the global interest rates will remain at low levels for an extended period. 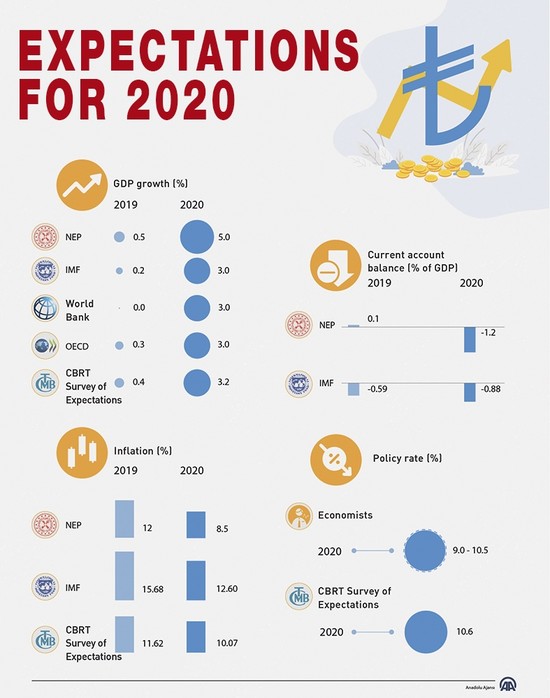 On the growth side, Turkey's GDP entered a promising era of growth in the third quarter of this year, breaking three consecutive quarters of contraction. The economy grew 0.9% year-on-year between July and September of this year, according to Turkish Statistical Institute (TurkStat) data.

Compared to the second quarter, gross domestic product (GDP) expanded by a seasonally and calendar-adjusted 0.4%, its third positive quarter-on-quarter in a row, TurkStat data showed.

The average estimates for the fourth quarter of the year are 4.5% to 5%. The overall annual growth forecasts vary by 0.3% to 0.6%. The government forecasts a 0.5% growth for this year. Also, the NEP targets a 5% annual growth rate for each of the next three years.

Güzeloğlu said the recovery in the economy and the decline in inflation are expected to continue in 2020. Accordingly, he said, GDP growth is expected to be around 4% to 5% in 2020, while inflation is expected to drop to single-digits to the range of 8%-10%.

He said the expected growth trend and recovered consumer and producer confidence would support the loan demand in a positive way, with emphasis that the banking sector will continue positive contributions to the economy.

On the other hand, he added that the reciprocal tariffs imposed by the U.S. and China are expected to be partially recalled and the two are expected to ink a trade deal in the coming days as part of the first phase of the U.S.-China trade deal agreed on in December. The trade volume that would increase in the case of such a step will reflect positively on the global growth, Güzeloğlu noted.

All these developments will be supportive in terms of fund flows to the emerging markets, according to QNB Finansbank's general manager.

The portfolio managers and strategists that participated in a recent Bloomberg survey labeled Turkey among the fastest-growing emerging economies next year. A total 64% of the 57 strategists and economists responding to the survey said the Turkish economy will register positive growth in 2020.

The U.S. dollar/Turkish lira exchange rate followed a fluctuating course this year, while it was 5.30 as of the end of 2018. The rate was set to close the year at around 5.90 after sinking to 5.18 earlier in the year.

Gürleyen said BIST is expected to reach up to 135,000 points in 2020 and listed several justifications behind the optimism.

"In our base scenario where the Turkish lira appreciated in real terms despite the easing of interest rates, we expect company profits to increase by 35% (bank 45%, non-bank 30%)," Gürleyen noted.

Compared to other developing countries, he underscored, "We are trading at a discount of 53%, well above our historical averages." Gürleyen also expressed beliefs that Turkey would go through U.S. sanctions much more softly that the market's pricing.

On developments that would make the BIST more attractive in 2020, he said investors looking for returns in a low-interest environment may turn to the stock market.

"Companies with high dividends increase the attractiveness of the stock market in an environment where real interest rates approach zero after tax," Gürleyen added.

Among others, exports and tourism revenues remained strong throughout 2019 and supported a more moderate rebalancing process. Despite developments in the global economy including protectionist measures and trade wars among major actors, Turkish exports continued to climb.

Also having long had a large current account deficit, Turkey enjoyed significant improvements in its external balances in recent months mainly thanks to a sharp decline in imports.

The 12-month current account balance turned to a surplus in June for the first time in nearly 17 years and has remained positive since. The central bank's balance of payment figures show the country's 12-month rolling surplus amounted to $4.33 billion in October, which marked the fifth consecutive month in which the annualized current account posted a surplus.

Previously, the 12-month current surplus came in at $1.2 billion, $4.7 billion, $5.3 billion and $5.9 billion in June, July, August and September, respectively. Analysts expect the balance to post a surplus in the remaining two months and project the surplus to end the year at $1.5 billion-$2 billion. According to analysts, the current surplus is not expected to increase further as a result of the reflection of the dynamism in economic activity.

With the measures taken over the last year, the improving tourism sector and decreasing imports, the annual current account deficit has gradually declined from about $58 billion in May of last year. The balance ended 2018 with a deficit of $27.6 billion, improving from a nearly $47.5 billion deficit the previous year. The figure was the lowest since 2009, while Turkey's highest annual current account deficit over the last decade was seen in 2011, with $74.4 billion.

According to Güzeloğlu, the current account balance, depending on the acceleration in growth, is forecasted to post a deficit of around 2% of the GDP.

The developments in the macroeconomic outlook of the Turkish economy led several international financial institutions to revise upward their estimates of the country's economic growth.

In its September report, the Organization of Economic Co-operation and Development (OECD) revised the 2019 forecast to 0.3% growth from a 2.6% contraction. For 2020, the organization expects a 3% growth in the Turkish economy.

The U.S.-based credit rating agency Moody's recently revised Turkey's economic growth forecast to 0.2% for 2019 from a 2% contraction and 3% for 2020 from 2%, citing the country's strong economic recovery.

The International Monetary Fund (IMF) report in September said the economy may see a growth of 0.25% in 2019, reversing forecasts of a 2.5% contraction in its report in April. The IMF's Turkey delegation announced Saturday that the Turkish economy is projected to grow by 0.2% in 2019, followed by a 3% growth in 2020.

The investment bank JPMorgan also revised its estimates. The bank said the GDP will grow 0.3% this year and 2.3% next year. JPMorgan had previously said the Turkish economy would expand by 0.2% in 2019.

In a November report, the European Bank for Reconstruction and Development (EBRD) said the Turkish economy will reach a growth rate of 2.5% in 2020.

In its October report, the World Bank said Turkish economic growth is expected to rebound to 3% in 2020, led by a recovery in private consumption and investment, accelerating further to 4% in 2021.

Gürleyen said they expect international credit rating agencies, such as Fitch and Moody's to revise upward their credit rating outlook for the Turkish economy, which could leave a positive mark in the period ahead.