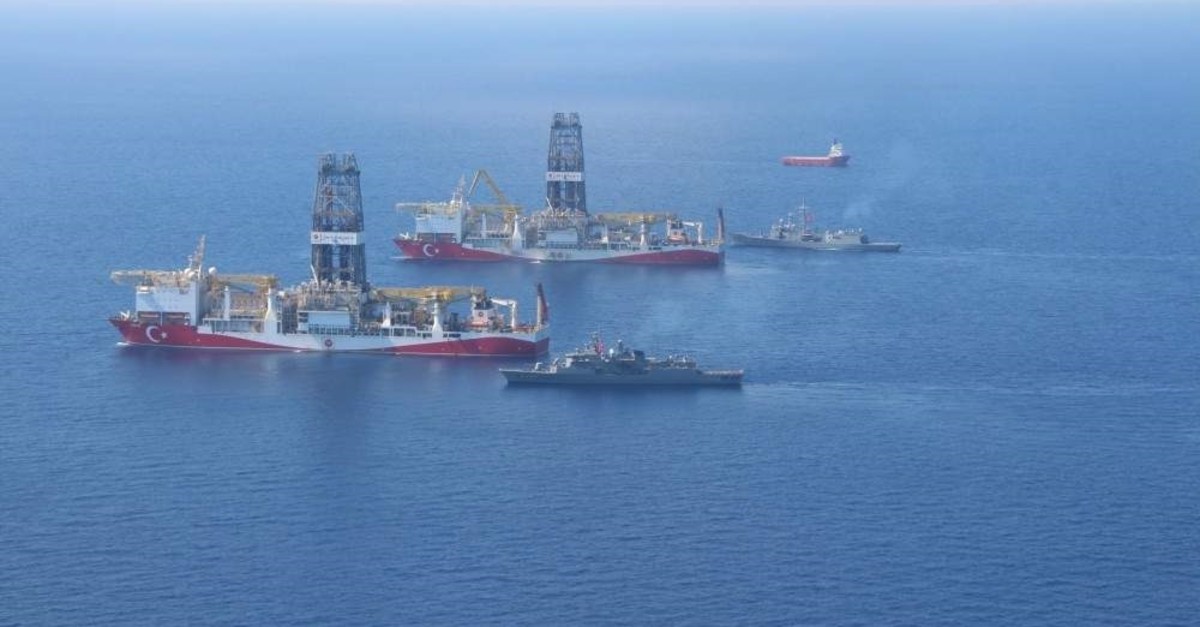 Turkish officials have criticized the steps taken by members of the Eastern Mediterranean Gas Forum, saying their projects and policies have long lost touch with reality

Despite Turkey's calls for cooperation on numerous occasions, Eastern Mediterranean countries continue their non-collaborative approach and exclusionary policies toward Turkey and the Turkish Republic of Northern Cyprus (TRNC).

The Eastern Mediterranean Gas Forum, in which Turkey and the TRNC have been left out, is an unrealistic formation, the Foreign Ministry said Thursday.

"If the purpose of this forum was really cooperation, of course, Turkey and the Turkish Cypriots would be invited to the forum as well," ministry spokesman Hami Aksoy said in a statement.

Aksoy stressed that the forum – established by some countries with political motives – is dreaming of leaving Turkey out of the energy equation in the Eastern Mediterranean.

The member countries – Israel, Greece, Italy, Greek Cypriot administration, Palestinian National Authority, Jordan and Egypt – of the Eastern Mediterranean Gas Forum, from which Lebanon was also excluded, convened in Cairo Thursday in order to turn the forum into an international organization by signing an establishment charter.

"Such organizations that were established in opposition to Turkey and the TRNC will not contribute to peace and cooperation in the region," he said.

"No initiatives that leave Turkey and the TRNC out will succeed in the Eastern Mediterranean. Therefore, this initiative provides new evidence that countries that have left our calls for dialogue and cooperation unanswered are still pursuing vain hope," he said. "We will continue to preserve the legitimate rights and interests of both Turkey and the TRNC."

France and the U.S. were also reported of being asked to join the forum during Thursday's meetings.

Turkey also opposed a pipeline project that will carry Eastern Mediterranean gas to Europe via the Greek Cypriot administration, Crete and Greece as it disregards the rights of the TRNC and violates Turkey's exclusive economic zone (EEZ).

Although Turkey opposes the project, the countries aim to reach a final investment decision by 2022 and have the pipeline completed by 2025 to help Europe diversify its energy resources. In order to take an initial step toward launching the project, Israel, Greece and the Greek Cypriot administration signed a deal on Jan. 2 in Athens.

The EastMed pipeline, which is estimated to cost around $6 to $7 billion, is being developed by IGI Poseidon, a joint venture between Italy's Edison and Greece's DEPA. However, Italy has yet to sign the agreement.

Calling on all parties for cooperation and a fair share of hydrocarbon resources in the region on every occasion, Turkish officials argue that the country is the securest and most commercially feasible route for the utilization of the natural resources in the Eastern Mediterranean and their transfer to consumer markets in Europe.

On Jan. 2, the Turkish parliament ratified a motion authorizing the government to send troops to Libya following deals on military cooperation and maritime boundaries in the Eastern Mediterranean that were struck on Nov. 27 between Ankara and Libya's U.N.-recognized Government of National Accord (GNA).

Ankara and the Tripoli-based Libyan government in November 2019 reached two separate memorandums of understanding, one on military cooperation and another on the countries' maritime boundaries in the Eastern Mediterranean. The maritime delimitation agreement secured both countries' western border in the sea.

The agreements were a response to the attempt to sideline Turkey and the TRNC in the Eastern Mediterranean, the ministry said, adding the unrealistic arguments put forth during a meeting earlier this month between Greece, France, the Greek Cypriot administration, Egypt and Italy against the maritime delimitation deal between Turkey and Libya revealed the merit of Turkey's steps in the region.

It further underlined that Ankara had a say in projects that involved it as it possesses the longest coastline in the Mediterranean and that it was prepared to cooperate with all countries in the region except the Greek Cypriot administration.

Dönmez confirmed that Turkey's exploration and drilling activities in the Eastern Mediterranean have expanded to a great extent in 2019.

The country sent its second drilling vessel, Yavuz, to the East Mediterranean Sea on June 20 to begin hydrocarbon exploration off the coast of Cyprus and now Turkey is considering purchasing and operating an additional drilling vessel for further exploration and drilling.

During the year, ongoing efforts to find common ground in sharing the East Mediterranean reserves between all concerned actors, namely Turkey, the TRNC, and the Greek Cypriot administration failed.

Dönmez previously revealed Turkey's plans to send a fourth ship, the Oruç Reis seismic vessel, to the Eastern Mediterranean region to continue exploration and drilling. Along with the Fatih and Yavuz drilling vessels, the Barbaros Hayreddin Pasa seismic vessel also conducts exploration activities on behalf of the country.

In August, the sixth generation ultra-deepwater drillship Yavuz started its first operation at the Karpaz-1 well located in the Bay of Gazimağusa, also known as Famagusta, in the TRNC. On Oct. 5, the Yavuz drilling vessel had reached its second location, the Güzelyurt-1 well, to continue oil and gas exploration and to start drilling activities on Oct. 27.

Turkey also plans further drilling and exploration activities in the region this year, particularly after the designation of blocks in Libya's EEZ in consideration of the latest agreement.