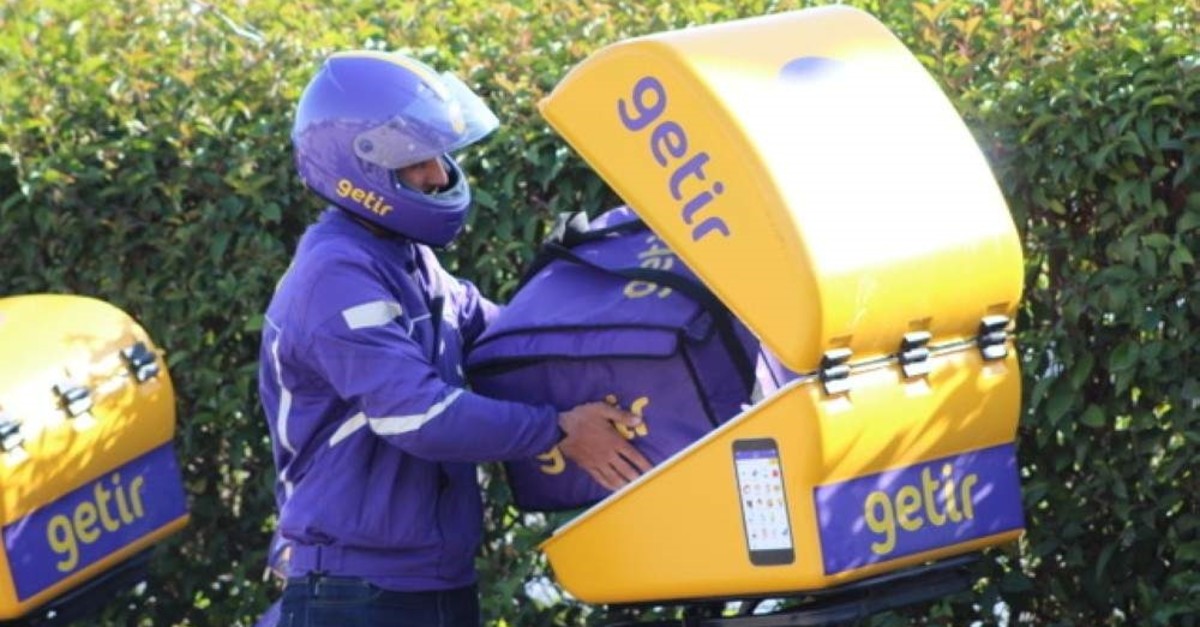 The Turkish startup Getir, which offers fast deliveries of fast-moving consumer products (FMCG), has secured $38 million in funding from a group of investors in Silicon Valley. (PHOTO BY GET?R).
by Timur Sırt Jan 17, 2020 7:02 pm

Having created a whole new market since its emergence in 2015, online fast delivery app Getir's latest $38 million Series A deal marks the highest first step for a company in history, setting off a wave of excitement throughout the Turkish entrepreneurial ecosystem.

The fast delivery service app received a total of $38 million in investment from a group of investors led by Silicon Valley's Michael Moritz, himself leading the investment with an injection of $25 million through Crankstart's investment fund.

Following Moritz, a number of investors from Brazil and Turkey have provided an additional $13 million in funding. Getir has completed its Series A tour with a total investment of $38 million, potentially paving the way for its $1 billion "unicorn" valuation.

"The way to save time and comfort in big metropolitan areas with traffic problems is through Getir," founder Nazım Salur said. "Our application solves problems in cities with traffic problems. Therefore, we have identified a number of major metropolises outside Istanbul. If you come at problems with the right solution, it is impossible for people not to respond."

The Getir algorithm allows users to access a cloud of goods and basic needs in every city and region and request super-fast deployment from stock warehouses located across key areas.

The map, which Nazım Salur took from his taxi app BiTaksi, manifested itself as Getir in 2015. Nazım Salur claims the group saw the potential of the project from the very beginning, backing it with investment at the moment of inception. "Given some of the most affected cities love us, we now aspire to places such as London and Paris. We are planning to move into Sao Paulo, Brazil, which is very similar to our city and a place investors seek our presence. We will use these investments for our global ventures. But I must say we are still in the early stage," Salur added.

It was also announced that, upon the completion of round A, Getir quickly sparked negotiations to form a new $100 million fund for round B. It is stated that this additional investment will be used to accelerate domestic growth, as well as to expand to foreign markets.

Serkan Ünsal, the founder of Startups.watch, which specialized in monitoring statistics and developments in the entrepreneurial ecosystem, said: "The investment that Getir has received boosts the morale of the entire ecosystem. It is especially good to see that foreign investors can invest in Turkey without hesitation when they see a good product," Ünsal continued: "With the completion of the investment at the end of 2019 and around $38 million being pumped in, our total investment for 2019 increased significantly, giving Turkey an advantage in terms of investment competition in Eastern and Southeastern Europe. In fact, we should not be surprised by this development because one of the two biggest areas in terms of investment last year centered around digital market/market distribution startups (the other being mobility). Both consumer interest and interest of the entrepreneurial ecosystem has focused on those areas, as confirmed by growth statistics. In mid-December, Nazim Salur announced that the group was handling around 58,000 orders per day, compared to 52,000 in early December."

Deloitte Turkey announced the 50 fastest growing technology companies in the last four years, as compiled in the Deloitte Technology Fast 50, with Teknofix ranking third, REM People ranking second and Bulutistan coming out on top with a growth rate of 9,682%.

The Technology Fast 50, announced by Deloitte Turkey in 2006, compiles the fastest-growing technology companies of the previous four years. The fastest-growing technology companies in Turkey are determined by the growth rate of net sales revenues over the time scale and announced at an award ceremony held with Facebook. According to the results of the Deloitte Technology Fast 50 Turkey 2019 Program, Bulutistan was the fastest growing technology company in Turkey with a rate of 9,682%. REM People came in second with 3,868% growth, while Teknofix came in third with 2,822% growth. The 2019 list of achievers saw long-time contenders, as well as a number of new startups, included on the list.

In 2019, the Deloitte Fast 50 program only listed the top 10 companies, with the remaining 40 only listed in alphabetical order. This year, the program announced, in partnership with Facebook, that it had two different award categories. The program, which offers technology companies exposure to Europe and the world, also handed out the Women in Tech Award for the first time this year to companies where the number of female employees exceeded the number of male employees. The award was picked up by Paycell. Another new category, the Cross Border Award, created in cooperation with Facebook this year, was given to the company that achieved the highest growth and turnover success among companies with a ratio of at least 50% of its total sales going abroad. The award was given to Teknasyon.

Aselsan and Logo Software received the Big Stars Award, which sees technology companies that presided over revenues of 50 million euros ($55.68 million) or more during the 2018 financial year, judged according to their growth rates over the last four years. In his opening speech, Deloitte Turkey partner and TMT industry leader Metin Aslantaş said the FAST 50 companies were playing a leading role in the development of the digital ecosystem in Turkey: "The most important principle that ensures the continuity of life in the universe we live in is the fact that living things can constantly convert their genetic codes," Aslantaş said. "As differences, variations and innovations come together, a new DNA emerges, and the unique life cycle continues. That is valid for the corporate world, too. Technology companies like you are joining different genetic codes to create new ones. This creates new codes that transform society, and adapt and develop conditions. In this sense, I see FAST 50 companies as evolutionists of the corporate world, and I am grateful to them for not only developing the business world but also the world in general."

"As a technology company aiming to be one of the most important partners in the growth journeys of young companies and startups, we are honored to support the Deloitte Technology Fast 50 program in its aim to celebrate innovation and technology and reward successful and emerging companies in this field to inspire other companies that may be at the beginning of their journey," Derya Matraş, vice president of Facebook Middle East, Africa and Turkey, said.

The Maxis Innovative Venture Capital Mutual Fund, of which İşbank is the main investor, made its third investment in the PCI Checklist, the fourth-term graduate of the Workup Entrepreneurship Program, with an injection of TL 1.1 million.

The Workup Entrepreneurship Program, which supports technology-oriented, early stage startups with a scalable and sustainable business model, has been continuing uninterruptedly since 2017 with main support from İşbank. The PCI Checklist, which graduated from the fourth term of the program in June 2019, received a TL 1.1 million investment from the Maxis Innovative Venture Capital Mutual Fund (Maxis Innovative GDP), which is the main investor of İşbank, in its first investment tour.

The PCI Checklist is the third company that Maxis Innovative GDP has invested in, following Kolay IK and Mutlubiev, and is the first company to receive an investment from Maxis Innovative GYSF after graduating from the Workup Entrepreneurship Program, which was applied to scale the business model.

The PCI Checklist, a SaaS software for real-time external vulnerability scanning, provides consulting, difference analysis, and audit services before entering PCI DSS certification for e-commerce sites and payment systems. The PCI Checklist provides information on what the identified gaps are, their underlying causes and how to resolve them, and works without any integration. The PCI Checklist can scan on behalf of third parties such as banks, payment systematists, SSL producers, corporate firms, etc. and shortens the process of acquiring member merchants and payment systematists while informing users about the cybersecurity situation of each partner business in the sector through the aid of a cybersecurity risk map covering the entire portfolio.

WIRELESS INTERNET IN MOST FREQUENTED AREAS OF TURKEY

Entrepreneurs and investors alike judge a city as a global stopover according to the quality of its internet infrastructure. Türk Telekom has established Turkey's largest indoor Wi-Fi network at Istanbul Airport, which hosts more than 200,000 passengers per day and is the largest passenger terminal under a single roof in the world. The airport hosts close to 5,000 access points for the benefit of guests, employees and all visitors from all over the world. Türk Telekom offers one-hour free of charge Wi-Fi service in every corner of Istanbul Airport, which can be used by all passing through the facility, whether subscribers or not.

Turk Telekom Technology Assistant General Manager Yusuf Kıraç said of the service now available at Istanbul Airport, one of the largest airports in the world, that the company would "make it possible for users to access the internet from anywhere, anytime and from any device. We aimed to make use of WiFi internet service for passengers and all guests at Istanbul Airport, which hosts more than 200,000 visitors daily," he continued. "Moreover, passengers can use their WiFi internet access onboard during their flight thanks to Türk Telekom. We are enriching our WiFi hot spots with new cooperations and new prestige points. Passengers connected to our state-of-the-art fixed and mobile communication network at Istanbul Airport are experiencing high quality and fast communication."

Türk Telekom provides one-hour of free internet access to users who connect via the IGA Wi-Fi network. After one hour of free use, users can opt to purchase either a full-time or two-hour package.

Thanks to the services it provides through its strong infrastructure and end-to-end solutions, Türk Telekom has put together a mobile team that provides 24/7 technical support at the airport to ensure the smooth running of services. The support team travels around Istanbul Airport with Wi-Fi T-shirts, providing support for both kiosk usage and internet connection.
RELATED TOPICS