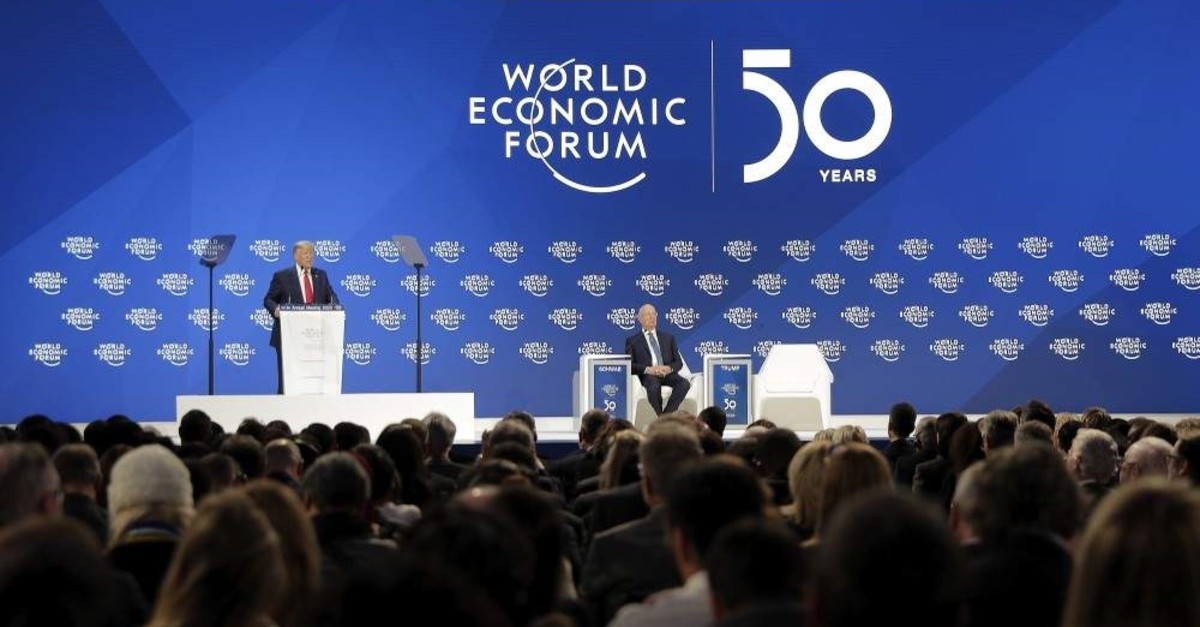 At a conference putting environmental issues under the spotlight, U.S. President Donald Trump took the stage to tout the success of his country's economy throughout almost his entire speech

U.S. President Donald Trump boasted Tuesday of having engineered a "spectacular" turnaround for the U.S. economy, urging the world to invest in the United States but had little to say about climate change, which was the focus of this year's gathering of top business and political leaders in the Swiss Alps.

Trump addressed the annual World Economic Forum in Davos, Switzerland, hours before his historic impeachment trial was to reconvene in the U.S. Senate in Washington. The two-day visit will test Trump's ability to balance his anger over being impeached with a desire to project leadership on the world stage.

He reminded the audience that when he spoke at Davos two years ago, early in his presidency, "I told you that we had launched the great American comeback."

"Today, I'm proud to declare the United States is in the midst of an economic boom, the likes of which the world has never seen before," the president said.

American economist Kenneth Rogoff said some, but not all of Trump's claims regarding the strength of the U.S. economy, are true. But he noted that the economy wasn't doing badly at the time when he took office. "It's been a good 10 years and his three years probably better than expected," Rogoff said, adding that he thought Trump was careful to keep his comments about climate change to a minimum to avoid getting booed.

Climate issues are a main theme at the forum with the phrase "Act on Climate" written in the snow at the landing zone where Trump's Marine One helicopter set down in Davos.

Late last year, the Trump administration began pulling the U.S. out of the landmark 2015 Paris climate agreement signed by nearly 200 nations. Under the deal, each country sets goals to curb emissions of heat-trapping gasses that lead to climate change. Trump has called the Paris accord an unfair economic burden on the U.S.

Trump's speech was received in virtual silence from the audience apart from a brief flurry of applause when Trump said the U.S. would join a World Economic Forum initiative to plant a trillion trees worldwide.

Climate activists Greta Thunberg doubled down on her criticism that world and business leaders were not taking the threat of global warming seriously, dismissing some of the measures bandied about by governments and companies, such as setting long-term targets for cutting greenhouse gas emissions and planting billions of new trees to capture carbon dioxide from the atmosphere.

"Planting trees is good, of course, but it's nowhere near enough," Thunberg said.

Trump's participation at the forum provided another conspicuous split-screen moment in his presidency. Before entering the hall to deliver his speech, Trump called the trial "disgraceful" and part of "the witch hunt that's been going on for years."

Asked whether Trump would watch the impeachment trial from Davos, White House press secretary Stephanie Grisham said, "He has a full day here in Davos, but will be briefed by staff periodically."

Trump spent nearly all of his approximately 30-minute speech talking about how the U.S. economy had been performing under his leadership.

"America is thriving. America is flourishing and yes, America is winning again like never before," Trump said before talking about a newly signed trade deal with China and a pending trade agreement with Mexico and Canada. He also spoke of record low unemployment, stock market gains and millions of people removed from welfare rolls.

Trump's speech was criticized by the Nobel prize-winning economist Joseph Stiglitz for failing to address the climate emergency beyond a commitment that the U.S. would join the initiative to plant a trillion trees worldwide.

Trump's appearance at the forum ends today when he travels back to a Washington consumed by the impeachment trial.

The Democratic-controlled House impeached the Republican president last month for abuse of power and obstruction of Congress after it was revealed that he had pressed Ukraine's president to announce investigations into former Vice President Joe Biden, a Democrat and a Trump political rival. Trump withheld foreign aid that Congress had approved for the Eastern European nation and dangled the prospect of an Oval Office meeting as leverage.

Trump denies any wrongdoing and argues that Democrats want to remove him from office because they know they can't deny him reelection in November. Trump would be forced to leave office if convicted, but the Republican-controlled Senate is expected to acquit him.

Trump on Tuesday had his first meeting with the new European Commission president, Ursula von der Leyen, the first woman to hold the position.

He has many disagreements with Europe over tax and trade policy, like a new digital levy by the French that will force American tech giants such as Amazon and Google to pay up.

Trump has smarted over the French tax, and his administration has announced plans to impose retaliatory tariffs of up to 100% on cheese, wine, lipstick and other French imports. France has threatened to fight back.

But after speaking to Trump on Monday, French President Emmanuel Macron tweeted that they the pair had enjoyed a "great discussion" about the digital tax and "will work together on a good agreement to avoid tariff escalation." Trump later retweeted Macron, adding the word: "Excellent!"

The U.S. has also threatened to impose retaliatory duties on $7.5 billion worth of European airplanes, cheese, wine and other goods in a separate dispute over subsidies for Airbus, a competitor to Chicago-based Boeing Co.

Trump has also sought to wring trade concessions from the EU by threatening tariffs on German autos, including BMW and Mercedes-Benz.