In the last couple of years, much has happened to create a vortex in the global oil market, while the short-term impact has been shrugged off thanks to supply. Yet, instability in the OPEC's second-largest producer Iraq still merits cautious optimism

The ongoing insurgency in Iraq is at the moment the biggest challenge to the stability of the oil market, said Fatih Birol, executive director of the Paris-based International Energy Agency (IEA).

"The recent developments in Iraq – the second-largest producer in Organization of the Petroleum Exporting Countries (OPEC) – is the single largest threat to the stable oil market in the short-term," Birol warned during an exclusive interview with Daily Sabah on the sidelines of the 50th World Economic Forum (WEF) Annual Meetings in Davos, Switzerland. 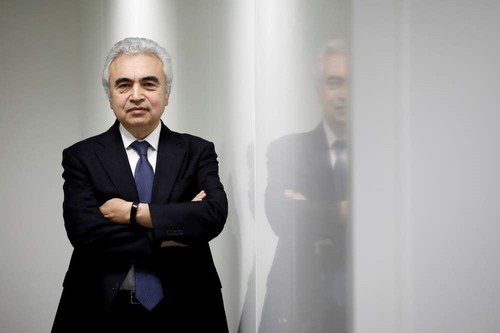 Fatih Birol, Executive Director of the International Energy Agency poses for a portrait at its offices in Paris, France, November 7, 2019. (REUTERS Photo)

Iraq has been mired in violent clashes between police and anti-government demonstrators, who are pressing for an overhaul of the country's political system. Some of the oilfields have been temporarily shut down as the widespread unrest has escalated. Located in Wasit province, the al-Ahdab oilfield, developed by China's CNPC with an output capacity at 70,000 barrels per day (bpd), had stopped production for a week and resumed Sunday. Badra, another oil field in the same province whose shareholders include Russia's Gazprom Neft, also faces the risk of closure. The field has an output of about 50,000 bpd.

Exempt from the OPEC cut deal since 2016, the Iraqi crude production had delivered a steadily increasing performance. In 2017, the average production was calculated at 5.5 million bpd, the data by Norway-based energy intelligence firm Rystad Energy revealed. The country produced 5.6 million bpd and 5.8 million bpd in 2018 and 2019, respectively. Up until now in January, the output has fallen to 4.7 million bpd, the company said.

Both domestic developments in Iraq and the surrounding geopolitical tensions are feeding worries concerning the output in the country, the IEA's executive director said. "This is the major potential problem in the short-term. If the output in Iraq is disrupted, it would create a huge impact on prices," he added.

"Although we are facing serious problems, the oil markets hover around reasonable levels," Birol said, elaborating: "Venezuela is a very significant producer and its production has almost dropped to zero because of the political turmoil in the country. As a result of sanctions, Iran's crude exports have remarkably depreciated. The drone attacks on Saudi Arabia's national oil company Aramco in September, the continuous unrest in Libya and the killing of the Iranian general (Qassem Soleimani) have not yielded major impact on the oil prices. Despite all these developments, oil prices have remained reasonable."

Despite the major developments that could have shocked the markets a decade ago, the oil prices stood around $60 per barrel over the last year. In January 2019, the OPEC basket price was $58.74 and in January 2020 so far the average price has stood at $66. Still, the oil prices spiked as much as 20%, tipping over $70 per barrel in the wake of the September attacks on Aramco facility, crippling half of the production capacity by nearly 50%, but the price quickly retreated to around $60. After Soleimani's killing on Jan. 3, the prices posted a quick reaction and hit $70 on Jan. 6, but the impact remained ephemeral as the markets saw no concern over supply.

Birol explained the reason behind the stabilized and serene markets as the continuous glut elsewhere in the world. "There is an abundance of oil coming from the U.S., Brazil, Norway, Guyana and Canada. That's why we are seeing a more comfortable market now. These incidents are somehow tolerated in the current oil market," he underscored.

Bogged down in political conflict since the overthrow of Moammar Gadhafi, Libya's oil production has been sporadically disrupted as the National Oil Company has been implementing force majeure and shutting down production operations in some field. Putschist Gen. Khalifa Haftar has also been disrupting the output in some of the fields located in the areas under his control. 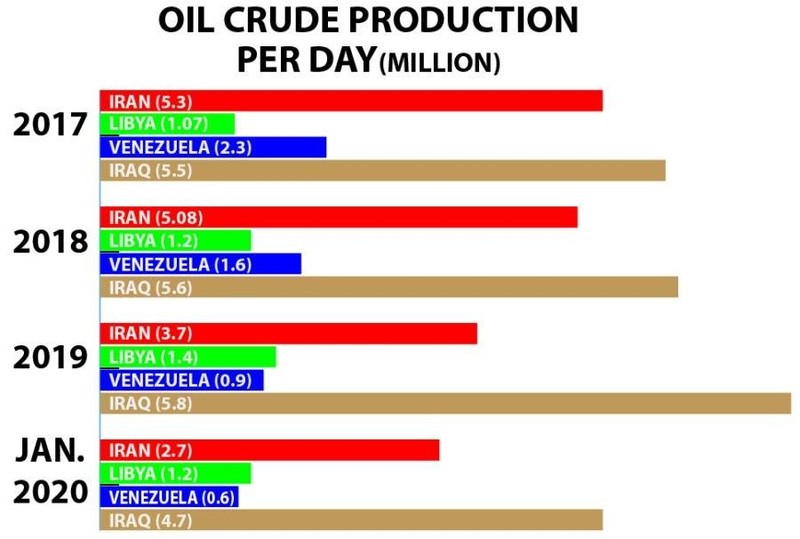 While the country produced 1.4 million bpd in 2019, its January production has not benefited from the further rise and stands around 1.2 million, the Rystad data showed. However, due to the blockade by Haftar, the production has been staggering since Jan. 18. The National Oil Company of Libya announced on Sunday that the country's crude oil production has decreased by 76.3%, reaching nearly 284,000 barrels per day, resulting in cumulative losses of nearly $318 million as a result of the blockade by Haftar militia.

Ahead of the Berlin conference on Jan. 19, Haftar and the Petroleum Facilities Guard of the central and eastern regions blockaded oil exports on Saturday from Brega, Ras Lanuf, Hariga, Zueitina and Sidra ports with instruction delivered to Sirte Oil Company, Harouge Oil Operations, Waha Oil Company, Zueitina Oil Company and Arab Gulf Oil Company (AGOCO), subsidiaries of the National Oil Corporation. The blockage was estimated to cost a loss of crude oil production of 800,000 barrels per day.

Previously the third-largest exporter and producer of OPEC, Iran's operations have been outstandingly crippled by the U.S. sanctions that were reimposed following the country's withdrawal from the nuclear deal in May 2018. The Persian Gulf nation's production, according to the Rystad, was 5.3 million bpd in 2017 – enjoying the benefits of the 2016 Joint Comprehensive Plan of Action (JCPOA) deal. In 2019, the Iranian crude output fell to 3.7 million and in January this year, it has averaged at 2.7 million bpd, Rystad said.

In an elaboration on the supply outlook of the oil and gas markets, Birol strongly emphasized that the world is embarking on a new period of "abundance" in energy supply.

"In oil, natural gas and renewable energy, the projection is rising and will keep increasing to a great extent. At the same time, the soaring output is putting downward pressure on prices," Birol explained.

The IEA executive chairman drew attention to a significant changing dynamic of the energy markets, a dynamic shifting in favor of the big importers. Five or six years ago, Birol opined, major gas producers had the strongest leverage in negotiations with their clients. At the moment, given the copious amount of production, the buyers are very strong, he emphasized. "Some of the producers will see a remarkable increase in gas output. For instance, the U.S., Australia, Russia and Qatar will see an outstanding surge in gas production," Birol explained.

Qatar's state-owned energy giant Qatar Petroleum was previously reported to increase liquefied natural gas (LNG) production capacity to 126 million tons per annum (mtpa) by 2027, an increase of 64% from the current level of 77 mtpa. The U.S. Energy Information Administration (EIA) predicts dry natural gas production in the U.S. will rise by 2.9% in 2020.

The rise in gas output will increase propitious circumstances for countries like Turkey, he remarked, pointing out the fact that now the energy world is talking about demand security. "Turkey should and will benefit from plummeting prices as a major gas importer. The current and prospective production conditions will enable Turkey to diversify its suppliers. It has remarkably empowered the infrastructure for LNG," he said. The current low price environment will hopefully enable Turkey to increase its negotiating power for the upcoming contracts, Birol added.

In the last decade, the European countries have already availed the resource abundance and saved billions of dollars in their negotiations for the pipeline gas contracts.

Some of Turkey's long-term gas contracts will expire in 2021, and the number of gas imports stipulated in those contracts total 16 billion cubic meters, corresponding to nearly 30% of the approximately 50 billion cubic meters (bcm) of domestic gas consumption per year, according to the Energy Market Regulatory Authority (EMRA).

Between January and October of last year, the amount of gas imports provided to Turkey through the pipelines hit roughly 35.5 bcm, according to initial calculations based on EMRA data. LNG imports, on the other hand, slightly exceeded 10 bcm, accounting for nearly 25% of the total gas imports in the said period.

In addition to the abundant supply, gas prices have been influenced by another striking reality: the mild winter temperatures. In contrast to previous years, countries around the world have experienced the effects of mild temperatures in the winters due to climate change. Even guests in Davos were welcomed by mild weather in the Swiss Alpine town – a fact German Chancellor Angela Merkel pointed out to raise alarms against climate change in her special address Thursday.

The lower winter temperatures have led to a further plunge in the prices since the gas demand has depreciated. On Jan. 21, U.S. natural gas futures fell below $2 per million British thermal units (mmBtu), down 5.4% to $1.8 mmBtu to their lowest level nearly since March 2016.

Asian spot prices for LNG plummeted to a multi-year low Monday, pressured by a lack of demand to consume abundant supplies. Coupled with milder-than-usual winter weather and curbed demand, some contracts fell below $4 per mmbtu in the Asian markets – the lowest in the last decade. The average LNG price for March delivery into northeast Asia was estimated to be around $4 per mmBtu, down $0.60 per mmBtu from the previous week.

"Our long-term price for Europe and Asia remains unchanged. In a balanced market, prices will need to be sufficient to cover the supply costs of new LNG projects. Consequently, we forecast prices to be about $7.10 per mmBtu at TTF (on real prices) and $8.20 per mmBtu for Asia Spot LNG (on real prices) in 2030," the company explained. For Henry Hub in the U.S., the estimates for 2030 remain at $3.29 mmBtu, but the prices are expected to increase further in the post-2030 period.

When asked about the investment trajectory in an environment of falling prices, Birol underscored that investment in fossil fuels will continue despite a waning appetite, yet strongly pointing out the rising trend in the renewables will also continue.

"The increasingly emerging new technologies in wind power, electric vehicles and hydrogen have nurtured the investment appetite. But these technologies have not matured," he said, drawing a comparison with the hydrocarbon investments. Moreover, Birol also stressed that renewable investments will account for 75% of electric investments in the next five years.

According to the IEA's Renewables 2019, global renewable-based energy capacity is set to rise by 50% between 2019 and 2024, driven by solar photovoltaic installations in homes, buildings and across the industry, report said.

With regard to the energy investment outlook, the IEA said in its latest report titled World Energy Investment released in May 2019, for fossil fuel supply, the lower levels of oil spending seen since 2014 would need to taper further to ensure consistency with the Sustainable Development Scenario (SDS). "However," the agency added, "investment levels fall well short of what would be needed in a world of continued strong oil demand – as in the New Policies Scenario (NPS)." The IEA argued that the annual investment required for 2025-2030 scenarios ask for an accelerating momentum in the total energy supply investments despite changing costs.

Highlighting the growing attraction of offshore oil and gas projects, the IEA stressed that companies are moving ahead with highest-value projects, many of which are in the Gulf of Mexico, Guyana, the North Sea and Brazil in addition to large LNG projects and sanctioning of gas fields in Mozambique.

"While 2019 marked the third consecutive year to see an increase in projects sanctioned, 2020 could see fewer project commitments but higher capex (capital expenditure) investments than 2019 levels," Rystad Energy said in its Global Service report. According to estimates by the company, 2020 will see investment projects worth $217 billion undergo the sanctioning process, including $115 billion in onshore projects and $102 billion in offshore projects. Up until now in 2020, energy investment projects worth $18 billion have received sanctioning.