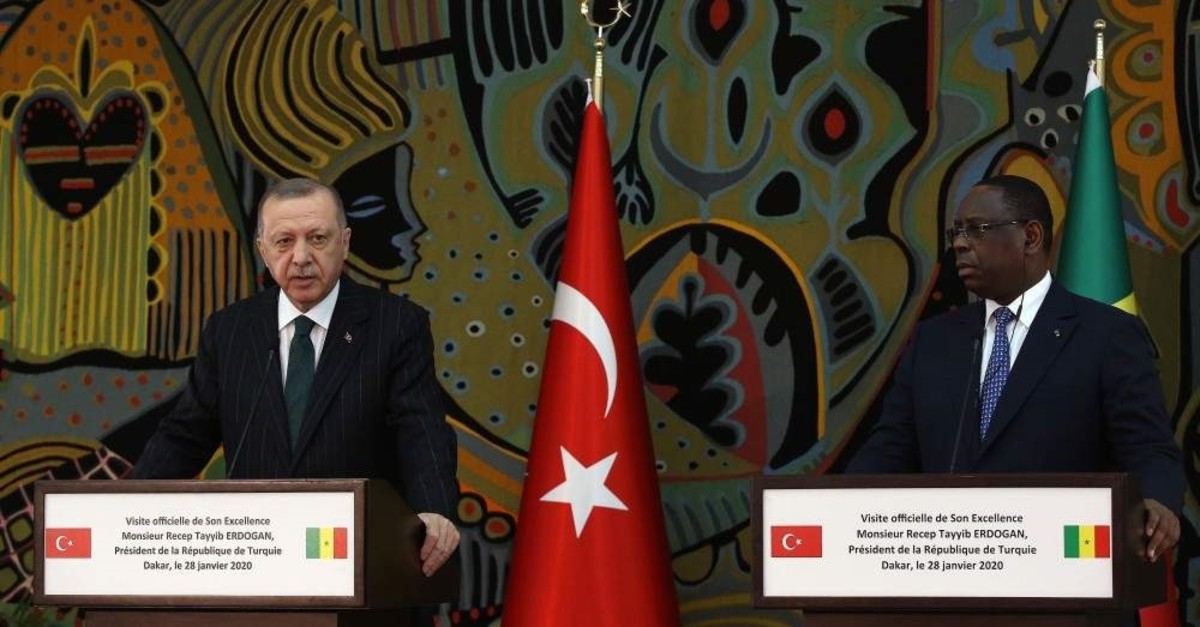 President Recep Tayyip Erdo?an (L) and Senegalese President Macky Sall (R) hold a press conference in Dakar, Senegal, Jan. 28, 2020. (AFP Photo)
by Daily Sabah Jan 30, 2020 5:39 pm
President Recep Tayyip Erdoğan's visit to Senegal Tuesday upon the invitation of Senegalese President Macky Sall has helped to improve bilateral economic relations. A number of agreements that Turkish and Senegalese officials signed and the renewed target for the bilateral trade volume were the most highlighted topics during the talks.

A $2 billion iron and steel plant investment by a Turkish firm in the Faleme mine in the West African country was an important project, the two presidents said.

During Erdoğan's visit to Dakar, a stadium project that will be constructed by a Turkish firm in the country for the 2022 Youth Olympic Games was also announced. The construction of the stadium with a capacity for 50,000 spectators will begin in February and is projected to be completed within 17 months.

Until now, 29 projects worth $750 million have been contracted to Turkish firms. Some of these projects have started operating, and the rest are still under construction. The Turkish businessmen are expected to take important roles in the construction and mining sectors to expedite the second phase of the Emerging Senegal Plan.

According to data from the Turkish Statistical Institute (TurkStat), the bilateral trade volume between Turkey and Senegal totaled $402 million. The better part of the trade was composed of Turkish exports to the Western African country with $390 million. In the period of January to November 2019, Turkish exports to Senegal were recorded at $263 million. Turkey's purchases of Senegalese goods and products in the same period were calculated at $9.4 million.

Turkey's national flag carrier Turkish Airlines (THY) aims to increase the number of flights to and from Dakar to 21 per week from its current level of eight, aiming to strengthen Dakar's connection with the world.

Sall also expressed that Senegal aims to enter the Turkish market and export peanuts and cashews to Turkey after Europe and Asia.

Turkish authorities also signed seven deals, including cooperation in education, aid implementation protocol, disaster management, sports, archiving and issues related to the diaspora. The two parties also agreed on the opening of a new cultural center by Turkey's Yunus Emre Institute which has been carrying out activities in the country for the last three years. Turkey's Kızılay also made a deal with Senegal's Red Cross to open the first regional office in Africa.
RELATED TOPICS