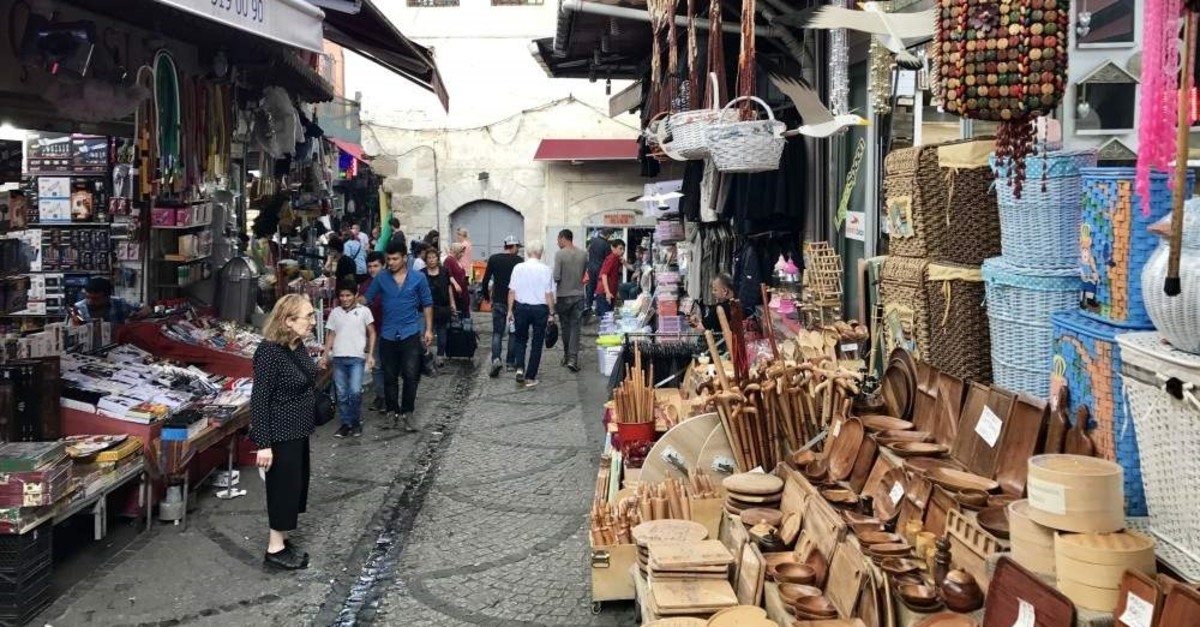 New coronavirus outbreak in China threatens global air freight market, as many countries including Turkey are seeing a quickening decline in sales of Chinese imported goods

The decline in Chinese exports due to the new coronavirus outbreak is expected to pose further risk to countries selling Chinese exported goods, and Turkey is no exception. The virus has been spreading rapidly and has already affected the global economy. The volume of cargo transportation carrying Chinese products has also decreased significantly, recent data showed.
The Tahtakale neighborhood of the district of Eminönü, a historic site in Istanbul and an area home to many shops selling products from electronics to garments, some of which have been depending on imports from China is seeing a decline in sales.
Ergin Baykuş, a souvenir wholesale trader in the neighborhood told the Demirören News Agency (DHA) that there is an overall drop in sales which, he argues, will continue for at least four to five months even if the outbreak of the virus is prevented since it takes that amount of time for Chinese goods to reach Turkey.
Production in China slowed down and even halted in some provinces, due to a lockdown on cities amid official’s effort to curb the virus which emerged in China’s central Hubei province at the end of 2019, spreading to over two dozen countries since first being identified in December, prompting the World Health Organization (WHO) to declare a global emergency. The new type of coronavirus has killed nearly 500 people so far. More than 20 countries have confirmed cases of the pathogen, which has infected at least 24,000 in mainland China.
Erdoğan Özdemir, another retailer who has an electronic shop at Tahtakale said that Chinese goods keep the trade ongoing as they are cheaper than those purchased elsewhere, adding that they are now selling the goods from their stocks but once they are finished, there will be a big problem.
Shopkeepers say their usual customers are even hesitant to buy from the shops due to fear over the virus’ contagiousness.
A mobile phone accessories retailer, Ahmet Deniz told DHA that the virus would definitely continue to have a negative effect on their sales as people are now afraid of buying Chinese goods.
Cargo shipments fall due to virus
Precautions to prevent the spread of the deadly virus has also affected cargo transportation.
The number of cargo shipments coming to Turkey from China has decreased 90%, especially after Turkish Airlines halted the flights between the two countries, according to an Anadolu Agency (AA) report that included data from Turkey’s Transportation and Infrastructure Ministry.
The report showed orders coming from China amounted to 300 packets daily but have now declined to almost 30 pockets.
Turkish Airlines (THY) and Chinese carriers operating flights connecting Turkey and China announced the suspension of flights last week until the end of February.
Releasing a statement, THY's senior vice president for media relations, Yahya Üstün, said Turkish Airlines is maintaining communication with all national and international authorities regarding the coronavirus and has halted all flights to China's Beijing, Guangzhou, Shanghai and Xian until the end of February. Planes carrying medical supplements are only operating between the countries.
Most of the online orders are from Chinese online shopping sites such as AliExpress, the global online retail marketplace under Alibaba Group.
Electronic goods, textile and trinkets lead the way among the Chinese goods ordered from Turkey and most of the goods are transported to Turkey by airmail due to its affordability.
Air freight market in danger
Meanwhile, global aviation data firm OAG said there would be more than 25,000 fewer flights operated to, from and within China this week compared with two weeks ago, with 30 airlines halting services.
About half of the air cargo carried globally is in the belly of passenger jets rather than in dedicated freighters, and the flight cuts have made the Chinese market more dependent on freight haulers.
Germany's Lufthansa Cargo said it had reduced its flying schedule, in part to allow pilots to spend the night in Novosibirsk, Russia, rather than in China. Demand from China to Germany has also fell because of the production shutdown, the spokesman said.
The Lunar New Year holiday has been effectively extended by 10 days in many parts of China, including powerhouse regions such as Shandong province and the cities of Suzhou and Shanghai.
The shutdown represents a fresh challenge to an air freight market that was already weak before the coronavirus epidemic. Global demand fell year-on-year for 13 consecutive months through November 2019 amid slowing economic growth and the U.S.-China trade war, according to the International Air Transport Association (IATA).
Korean Air Lines Co Ltd has also said the transportation shortages had led to a decline in fresh food shipments, such as lobster and salmon. "On the other hand, Chinese transport and request of medical supplies such as masks and cleaning agents is increasing," the airline said in a statement.
A spokeswoman at Japanese airline ANA Holdings Inc also reported rising demand for medical supplies such as surgical masks although shipments of other goods had been delayed.