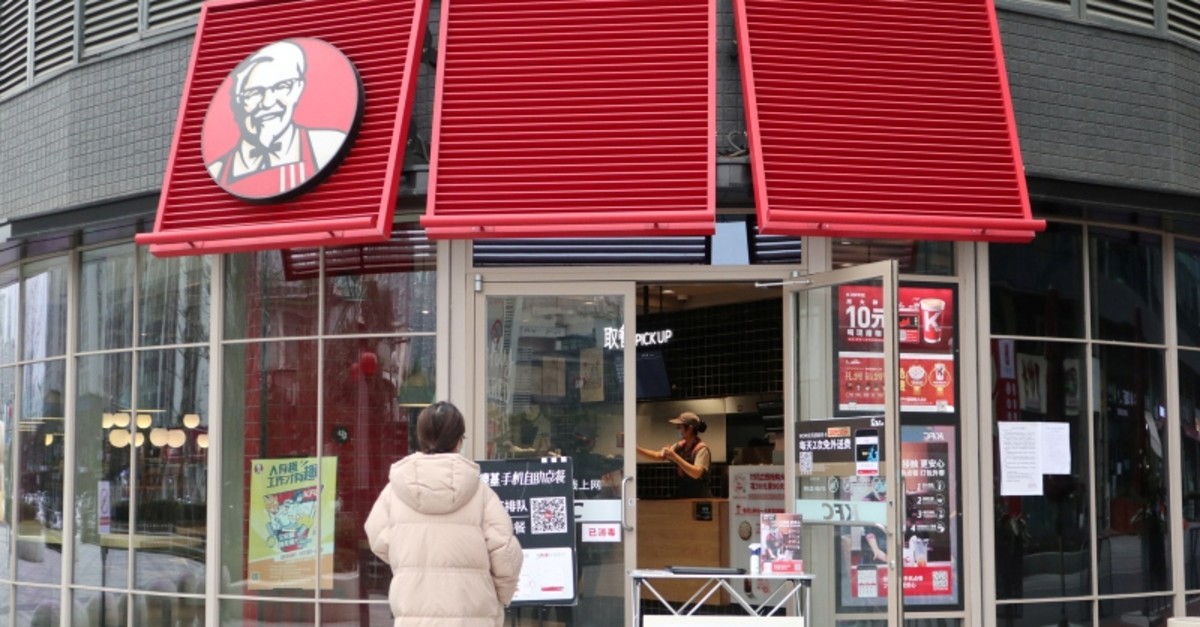 A customer waits to pick up her order outside a KFC restaurant where a table is set up at the entrance for contactless pickup of orders placed online, as the country is hit by an outbreak of the novel coronavirus China (Reuters File Photo)
by Reuters Feb 17, 2020 12:51 pm

With the coronavirus outbreak in China continuing to spread, McDonald's Corp, Starbucks Corp and other fast-food companies are ramping up "contactless" pickup and delivery services to keep their workers and customers safe, the companies said.

McDonald's has implemented contactless pickup and delivery of Big Macs, fries and other menu items across the China as the outbreak has unfolded.

Customers order remotely – on mobile phones or by computers in store – and employees seal the meals in bags and put them in a special spot for pickup without person-to-person contact, McDonald's says on its website.

For delivery orders, drivers drop McDonald's packages at building entrances, disinfect their delivery bags and wash their hands more frequently. Drivers carry ID cards showing that they - and the people who made and packaged their food - had their body temperature scanned to prove they do not have a fever.

"While we look at how to further improve the process, the stepped-up preventive measures apply to all of our servicing channels," McDonald's said in a statement to Reuters.

The flu-like virus has infected more than 68,500 people globally and killed 1,665 as of Sunday, mostly in the central Chinese province of Hubei. Some major Chinese cities still resemble ghost towns as China struggles to get its economy back on track after a prolonged Lunar New Year holiday.

In early February, 83% of all stores on the Meituan-Dianping delivery platform – one of the largest in the country – were closed, according to Beijing-based data firm BigOne Lab.

Starbucks suggests customers order coffee via its app and then wait outside its cafés until they get a pick-up notice. Orders are placed on tables just inside café entrances.

If they do enter Starbucks locations, customers have their temperature taken at the door, as fever is one of the main symptoms of infection, and baristas wear masks.

For delivery, Starbucks said it regularly sterilizes containers and that its delivery people have their temperature taken daily. Indoors staff must wash hands every 30 minutes, and public areas are sterilized every two hours.

The measures illustrate how companies are quickly adapting in order to sell prepared food while keeping people safe.

There had been contactless delivery in China prior to the crisis when couriers would drop packages at a consumer's door or lobby or place parcels in lockers for later pickup.

But since the outbreak, many residential compounds are limiting access for drivers and asking customers to pick up their own packages.

In transactions that previously would have involved one person handing a package to the other, the driver now puts the food down – on the back of a moped, for instance – and then steps back and waits for the customer to take it and leave.

One customer, for example, asked a delivery person to put a parcel in the elevator and press the button for the designated floor. The customer grabbed the package when the doors opened – unaccompanied by the courier, according to a post on CCTV News' social media account on Weibo, said Allison Malmsten, a marketing strategy analyst at Daxue Consulting in Shanghai.

Since the start of the outbreak, Yum China has closed more than 30% of its locations. There have been "significant interruptions," with sales off as much as 50% in those that remained open since the Lunar New Year holiday, versus the same time last year, Chief Financial Officer Ka Wai Yeung said in a Feb. 5 earnings call.

The crisis has accelerated the rollout of Yum China's contactless services in China, it said in a statement.

"These services have been well-received by customers and are playing an important role in ensuring that our delivery business continues to hold up during this period of significantly reduced dine-in traffic," it said.

Early during the epidemic, meal delivery took a hit because customers feared contact with drivers would put them at risk of infection, according to news reports.

Cases of couriers being diagnosed with the virus after working for days arose in Shenzhen and Qingdao cities.

The companies' reliance on pickup and delivery to offset some losses does, however, have limitations.

Malmsten said many drivers cannot return to work due to travel restrictions, and those who can return face long hours and physical and mental fatigue. As a result, SF Express, the second-largest courier in China, has ramped up hiring, she said.