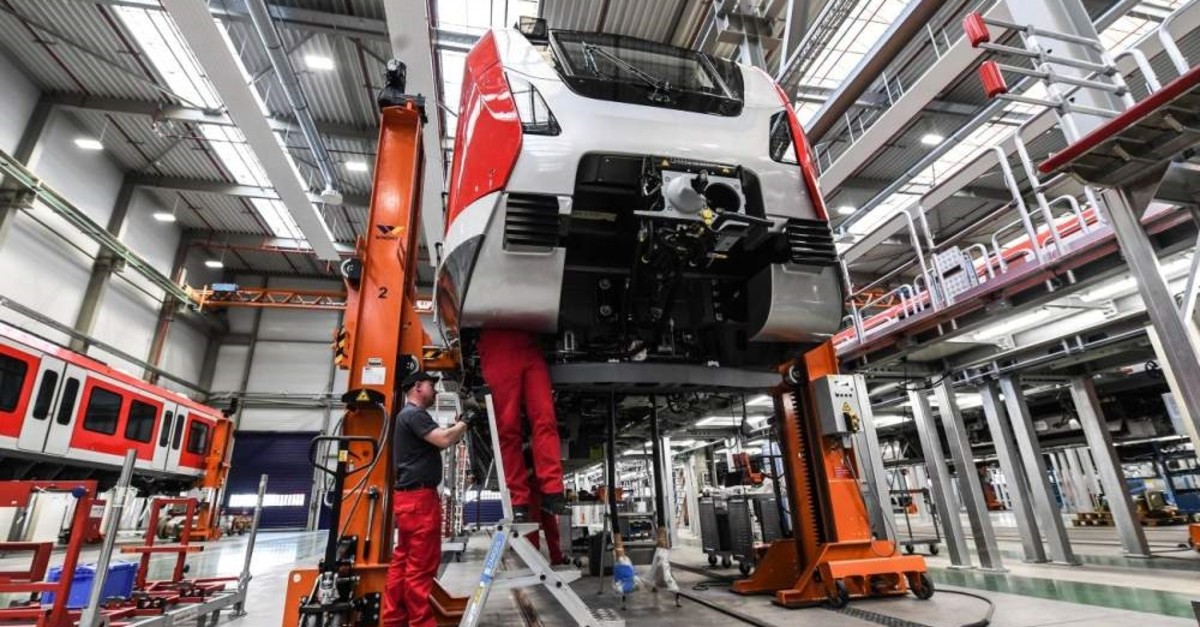 This file photo shows Bombardier employees working on an S-Bahn train at the Bombardier Transportation plant in Bautzen, Germany, May 13, 2019. (EPA Photo)
by Agencies Feb 18, 2020 12:25 pm

France's Alstom has agreed to buy the rail division of Canada's Bombardier for up to 6.2 billion euros ($6.7 billion) to create the world's No. 2 train manufacturer and better take on Chinese leader CRRC Corp.

The cash and shares deal, announced on Monday, is the latest attempt by Western rail firms to try to build scale.

Alstom, the maker of TGV bullet trains that speed between French cities such as Paris and Nice, was blocked last year from merging with Germany's Siemens by European regulators, who argued the deal could penalize consumers.

The agreement between Alstom and Bombardier would unite companies with an estimated $17 billion in combined revenues. The French firm said the two were complementary geographically, adding Bombardier's European footprint was stronger in northern countries and the Canadian firm would add expertise in monorail trains as well as rail services.

"We don't see it as a huge issue," Alstom Chief Executive Henri Poupart-Lafarge said of regulatory hurdles on a conference call. "If there are some issues, they will much easier to solve than the one we had with Siemens."

A combination with Bombardier would give Alstom a share of between 40% and 60% of the European regional train market, according to estimates cited by union sources in France, well above Siemens at 10% to 20%. But some analysts have said there could be less opposition to a deal this time as Alstom and Bombardier have a lower combined European market share in high-speed rail and signaling.

Nevertheless, Alstom shares were down 4.4% in early session trading. "We believe shares will now remain range bound amid the capital increase and uncertainty during a lengthy anti-trust process," wrote analysts at JP Morgan, which cut its rating on Alstom to "neutral" from "overweight."

"Since the European Commission has just recently looked at the transportation end of the market at the back of the Siemens-Alstom deal, Alstom believes the (Commission) already holds good knowledge of the sector and therefore expects a quicker approval," Credit Suisse analysts said in a note, retaining a "neutral" rating. French trade unions issued a statement on Monday saying an Alstom-Bombardier deal must not result in major job losses in France.

The French government, which had criticized the EU's veto on the Siemens merger, welcomed the transaction. "This deal will allow Alstom to prepare for the future, against the backdrop of increasingly intense international competition," Finance Minister Bruno Le Maire said, adding he was due to discuss it with the EU's antitrust boss Margrethe Vestager on Tuesday.

Bombardier and Alstom said they expected the deal to close in the first half of 2021. Their agreement includes a 75 million euro break fee.

Heavily indebted Bombardier, which started out making snowmobiles 80 years ago, embarked in 2015 on a major restructuring and said in January it was planning a range of divestments. Last year, burdened by a mostly long-term debt pile of some $9 billion, Canada's top manufacturer agreed to sell off its regional jet program to Japan's Mitsubishi Heavy Industries for $750 million.

In 2018, it sold control of the CSeries medium-haul jet program to Airbus and the Quebec government, which was renamed the A220.

Train makers are eyeing consolidation to reduce costs and improve thin rolling stock margins, and Alstom said it also wanted to make the most of a boom in rail travel as consumers switch from planes for environmental reasons. The merged group would be able to reach annual cost savings of 400 million euros from the fourth year, the company added.

Under the deal, one of the Bombardier rail division's shareholders, Canadian pension fund Caisse de depot et placement du Quebec, would become the lead investor in Alstom with an 18% stake. The fund used to own 32.5 percent in Bombardier Transportation. French telecoms-to-construction conglomerate Bouygues would retain around 10% of Alstom, which said it would finance the transaction by raising equity and with debt. The final price will be between 5.8 billion and 6.2 billion euros, it said.

The deal gives Bombardier's rail unit an enterprise value – equity plus debt – of $8.2 billion and would allow the Canadian firm to pay down some of its debt. Shares in Bombardier have dropped some 70% since a peak in 2018, while Alstom's have risen 30% in the same period.

Bombardier has also been struggling to contain higher rail costs generated by problematic contracts in its nearly $36 billion order backlog, which Alstom said it would look to fix.

"Clearly I would have preferred for things to have turned out differently for Bombardier," Quebec Prime Minister François Legault said, adding that Caisse's presence in Alstom's capital was a comfort for Canadian interests. Bombardier has some 14,000 staff and supports around another 40,000 jobs in Quebec.

Bombardier also recently announced it was selling off its aerostructures business to Spirit AeroSystems of the U.S. for more than $1 billion in cash and debt. The Canadians, with a workforce of some 36,000, retain their profitable Learjet, Challenger and Global Express business jets activity.

Bombardier Transportation is headquartered in Berlin and focused on commuter trains. It has plants worldwide including at Derby in central England, Mannheim in Germany and Crespin in northern France.

Alstom's Poupart-Lafarge said the acquisition would not affect jobs although the company said it planned to move its Americas headquarters to Montreal. "This acquisition will improve our global reach and our ability to respond to the ever-increasing need for sustainable mobility," he said. "There is no idea of restructuring or threats to jobs, but rather the opposite," he later told journalists.

Alstom employs 36,300 staff, a quarter of them in France. The two firms have a virtual monopoly on rolling stock in France and regularly work in tandem on infrastructure such as metros and the Paris RER regional train network.

Siemens on its own

A previous flirtation between Siemens and Bombardier to combine some train businesses fell apart in 2017. A source close to Siemens said there was no sign the firm was planning any type of counterbid, given EU regulators' tough stance on its previous attempts.

Germany's IG Metall union called on the German government to look at the matter and raised concerns about an Alstom-Bombardier deal, saying it "would not accept any consolidation at the expense of Germany" should EU regulators allow this combination. State-owned Deutsche Bahn is a big customer of both firms.

Alstom had already held up the Chinese competition in trying to merge with Siemens only for Brussels to rule a merged company would have had an overly dominant market position in Europe. Poupart-Lafarge, who began his career at the World Bank, has targeted "internal investment and external partnerships" but also "acquisitions" as the way ahead after the derailed Siemens merger.

Alstom has focused on transport after ceding its energy interests to General Electric five years ago. It is now debt-free with cash in the bank.

Adding Bombardier Transport would position Alstom as a global rival to China's giant China Railway Construction Corporation (CRCC) which boasted sales of around $30 billion in 2018. Although some 90 percent of its sales are in China, the CRCC has been spreading further afield notably with tram investments in Portugal.

It has also intimated, according to weekend British media reports, a readiness to engage in the construction of Britain's HS2 high-speed project.