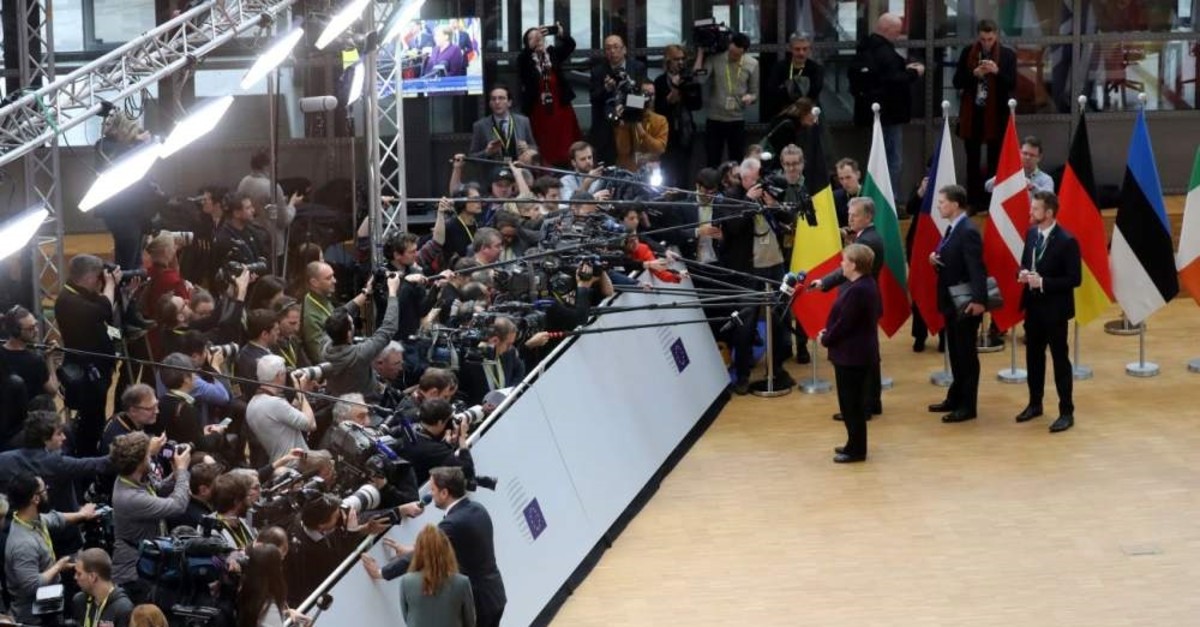 EU leaders clashed Thursday at the start of a stormy summit to decide the bloc's seven-year budget after Brexit, with bitter divisions between parsimonious rich nations, poorer ones wanting to preserve spending and others wanting to fund grand global ambitions.

The tussle for money, hard-fought at the best of times, is especially problematic this time around because of Britain's departure from the EU.

The "Brexit gap" caused by the loss of the U.K.'s contribution is 75 billion euros ($81.10 million) over the 2021-2027 period, but French President Emmanuel Macron insisted this must not mean the EU should trim its ambitions by cutting spending.

German Chancellor Angela Merkel warned there were "major differences" to overcome among the 27 countries, as some officials braced for talks to drag into the weekend. "We are not satisfied with the current situation because the balance within the net payers has not yet been properly negotiated," Merkel said as she arrived.

Summit host Charles Michel, the EU Council president, kicked off the day with one-on-one meetings with leaders of the 27 states starting with Sweden, one of the so-called "frugal four" opposed to big budget increases.

"I am convinced that it will be possible to make progress in the next hours or in the next days," Michel told reporters. But not everyone shares Michel's optimism, with some EU sources suggesting differences are so great the summit could end quickly and could be kicked down the road to another summit – or two – in the coming months.

Macron, who wants farm payments protected and more money for European defense projects, said he was ready for the long haul. "I will take all the time that is needed to get an ambitious agreement that defends the interests I represent," he said, insisting that with "a spirit of compromise and ambition" a deal could be found.

He added it would be "unacceptable for Europe to compensate for the British departure by reducing its means."

But Finnish Prime Minister Sanna Marin slapped down the French leader's call for post-Brexit largesse, saying the EU had to be "realistic" following the departure of one of its biggest net contributors.

The minimum spending in the multi-annual financial framework (MFF), as the long-term budget is called, is just over one trillion euros.

The discord is over how much this budget should increase by, how spending might be shifted between priorities and how much each member state should pay as a percentage of its gross domestic product (GDP).

Another touchy issue is whether budget rebates pocketed by a few wealthier countries should still exist. The last MFF came in at 1.08 trillion euros (in 2018 prices).

The "frugal four" – Austria, Denmark, the Netherlands and Sweden – want to rein in the budget and make up only some of the ground of the Brexit gap. They also want to keep their rebates, as does Germany.

Dutch Prime Minister Mark Rutte tweeted a picture of himself and the other "frugals" insisting on a low increase and modernization of the budget, while his Swedish counterpart Stefan Lofven rejected what he called the proposed "dramatic increase" of their contributions.

At the high end of spending demands is the European Parliament, which wants the MFF to expand to 1.32 trillion euros to pay for costly goals such as turning the EU into a carbon-neutral economy within three decades.

A "friends of cohesion" group of mostly eastern and southern EU nations wants to ringfence money it gets to help bring infrastructure and society up to the level of wealthier counterparts.

Agriculturally sensitive countries such as France, Spain and Poland are also looking to preserve farmers' subsidies.

The European Commission, which aims for a "geopolitical" mantle under President Ursula von der Leyen, is trying for a target of 1.13 trillion euros.

Ahead of the summit, Michel proposed an MFF of 1.09 trillion euros, making cuts to cohesion funds and farm subsidies to finance other priority areas.

A senior EU official said Michel's plan would re-allocate "about eight billion euros from richer to poorer member states." His plan, though, has little support.

The European Parliament has rejected it as too little. Germany says it is a "step backward" and Spain has criticized it for "not recognizing the role of agriculture" in EU cohesion.

But the senior EU official said Michel believes the splits will not change over the coming months and he "is very determined to clinch a deal in the coming days."