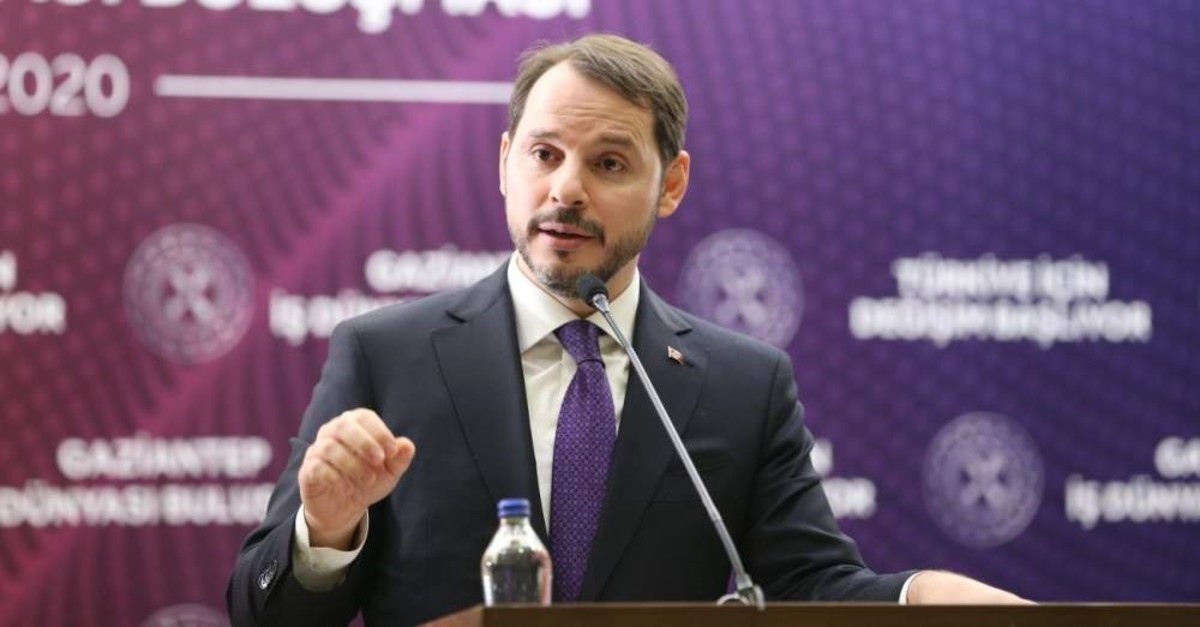 Reiterating the country's determination to fight inflation as well as interest rates, Finance Minister Albayrak noted that the government would continue to provide support for production, exports and employment through various financing models

Turkey has achieved success against inflation and high interest rates but needs to press on in the fight, the treasury and finance minister said Thursday.

"We have achieved success against inflation and exchange and interest rates, but it is not enough – we have just gotten started," Berat Albayrak told a meeting with businessmen in Turkey's southeastern province Gaziantep.

After becoming a pressing issue for the economy in the second half of 2018, when it surpassed 25% in October, inflation dropped gradually throughout 2019, from 20.35% in January to 8.55% in October, thanks mostly to base effects from high volatility in exchange rates in 2018. It closed the year at 11.84% in December.

The rate rose slightly more than expected to 12.15% year-on-year in January, according to official data.

In turn, the Central Bank of the Republic of Turkey (CBRT) delivered an aggressive easing cycle in its monetary policy in July last year, after having raised the key rate to 24% in September 2018 in the face of rising inflation.

The bank on Wednesday went on to lower its key interest rate by 50 basis points to 10.75%, as expected, its sixth consecutive rate cut and the smallest so far in the easing cycle designed to boost economic growth.

Thus, it has slashed the benchmark one-week repo rate by 1,325 basis points since July 2019. The bank will hold 10 more meetings this year.

Commenting on the bank's 50-basis-point reduction in interest rates, Albayrak said the bank continues to use all of its instruments to fulfill financial stability targets.

The inflation rate is expected to hit 8.5% this year, as laid out in the New Economic Program (NEP) for 2020-2022 announced by the government last September.

The CBRT recently reaffirmed its view that inflation will converge gradually this year as it made no changes in its midpoint inflation forecast for the end of this year and next. Policymakers at the bank project inflation at 8.2% in 2020.

Speaking to lawmakers from the ruling Justice and Development Party (AK Party) Wednesday in the capital Ankara, President Recep Tayyip Erdoğan said the government maintains its determination to lower interest rates and inflation.

"We will continue our determination to fight inflation and interest rates," Albayrak said, also stressing the growth in the country's industrial production, the drop in borrowing costs, and the surge in the leading indicator of growth, the Purchasing Managers' Index (PMI), all of which the minister said have contributed to the country re-entering the path to healthy growth.

The index rose to 51.3 in January, exceeding the 50-point line that separates expansion from contraction for the first time since March 2018, as new orders grew with improving customer demand and an increase in new export orders, ending a five-month moderation.

"We will achieve a year-end growth of at least 5% within the frame of this mode," Albayrak stressed.

During a financially and economically turbulent period that kicked off in the second half of 2018 and stretched into the first half of 2019, the Turkish economy was battered by currency volatility, high inflation and high interest rates, resulting in tumbling domestic demand from consumers and investors.

The improvement in macroeconomic indicators and markets will spread to every segment of the society, Albayrak added. The minister attributed the success to the government measures as well as the strong coordination of all institutions in the economy and their support for the business world.

The country's gross domestic product (GDP) entered a promising era of growth in the third quarter of 2019, taking a turn after three consecutive quarters of contraction.

The economy grew 0.9% year-on-year between July and September of 2019, according to data from the Turkish Statistical Institute (TurkStat). Compared with the second quarter, the Turkish economy expanded by a seasonally and calendar-adjusted 0.4%, its third positive quarter-on-quarter in a row, TurkStat data showed.

"We will continue to implement our growth model based on added value, production, exports and employment. All indicators show we will have closed 2019 with positive growth," Erdoğan said Wednesday. He noted Turkey's economic activity will hopefully grow more than the targeted 5% in 2020.

Later in his speech, the finance minister pointed to instruments that the government launched to support production and export-oriented sectors, including the Advanced, Productive, Indigenous, Industry (IVME) Financing Package.

"We have provided TL 30 billion to our industrialists with the IVME package alone. Up to TL 50 billion has been allocated," Albayrak noted, adding that another TL 35 billion was allocated with the employment-oriented financing package ISTOD and that TL 23 billion of it has turned into investments.

The minister stressed that they will continue to support production and continue increasing employment with strong financing models, in addition to the IVME package.