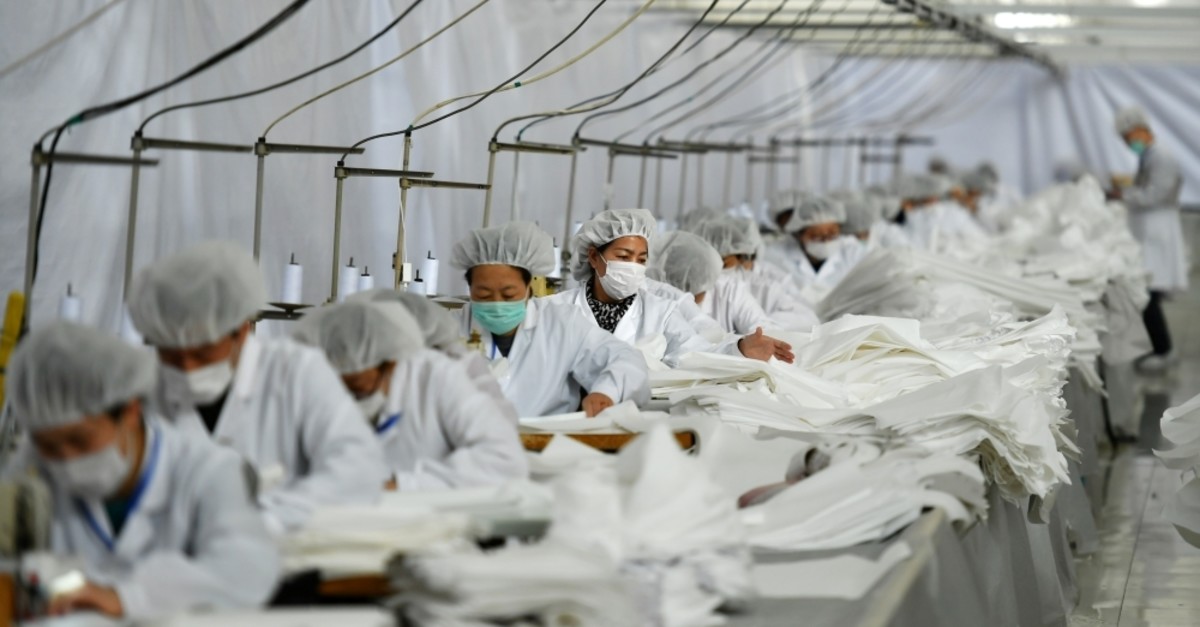 Employees work on a production line manufacturing protective suits at a clothing factory, as the country is hit by an outbreak of the novel coronavirus, in Shijiazhuang, Hebei province, China Feb. 17, 2020. (Reuters Photo)
by Daily Sabah with Agencies Feb 23, 2020 5:14 pm

Several buyers, especially in the textile sector, are expected to start purchasing products in Turkey after the coronavirus outbreak drove them away from China. Meanwhile, disease continues to hurt the country's exports to the East Asian nation

The new coronavirus outbreak in China may lead global buyers to find new markets, especially in sectors such as textile, garments and steel, and Turkish businesses are one alternative. The outbreak, however, also may cause a decline in the country's exports to the Far East, such as natural stones of which China is the No. 1 buyer.

According to a report by Turkey's Ministry of Agriculture and Forestry, COVID-19 will cause a possible shrinking of China's textile and garment industry – for a country that is a huge exporter for global brands – and this may drive those brands toward Turkey, increasing the importance of cotton growing in the country.

The report by the ministry's Department for Agricultural Basins, which evaluated the effects of the new outbreak on the cotton sector, stressed that China had the biggest share in the overall fiber cotton imports during 2018 and 2019 which recorded nearly 9.3 million tons worldwide. Bangladesh, Vietnam, Pakistan and Turkey had followed China respectively, while some 9% of the cotton imports of the total world record were carried out by Turkey.

During the same period, the U.S. had the biggest share in the overall fiber cotton exports with 3.2 million tons and was followed by Brazil, India and Australia.

The report suggested that the expected shrinking in the garment and textile industry in China due to the coronavirus outbreak – which had already caused factories to be shut down, cities to be locked down and flights to be canceled along with its already-visible impacts on the world economy – will increase the textile demand from Turkey, adding the demand is expected to be met with domestically produced cotton.

It is expected that big European brands will return to Turkish companies especially for fast order products, it noted.

Burak Sertbaş, chairman of the Aegean Garment and Apparel Exporters' Association, who was quoted by Turkish daily Dünya, on the other hand, argued that although the order shifts will have positive effects, the effect on the figures will be limited.

It was noted in the ministry report that in relation with the developments, the prices of Turkish cotton is also expected to increase, along with an increase in the global cotton prices, which had saw a decline earlier.

The export figures in Turkey's steel industry, are also one of the positively affected, as the country's steel exports to Asian and African markets has already been increasing especially within the last 15 days, after several Chinese factories halted production.

While the increase in steel product sales to African countries reached 15%, new orders are coming from Singapore, Hong Kong, the Philippines, Malaysia and Bangladesh, which were markets that Turkish exporters had difficulties in entering before.

Aegean Iron and Steel Exporters' Association Chairman Yalçın Ertan stated that if this trend continues, they expect at least 1 million tons in additional exports, when compared with figures recorded in 2019

The impacts of the coronavirus outbreak on the natural stone and mining industry are also being monitored closely, as Turkey exports natural stones to China worth approximately $700 million annually. Disruption of loading and unloading at ports in China and the halt of construction projects also reflected on marble and travertine exports from Turkey. China is Turkey's biggest buyer of those two products.

The Xiamen Natural Stone Fair in China, where Turkish exporters have been attributed great importance, has already been postponed while it does not seem possible for Chinese buyers to come to the Marble Natural Stone Fair which will be held on April 1-4 in western Turkey's Izmir province.

Aegean Mine Exporters Union Chairman Mevlut Kaya said the mining sector is the largest sector in Turkey that was negatively impacted by the virus outbreak, noting that they started sending medical masks to China instead of natural stones.

Exports from the Aegean region, which sent the most stones to China, decreased in February by 54.5%, he noted. "Instead we sent 20,000 to 30,000 masks to China after receiving demands via their social media application WeChat," he said.

One of the indirect effects of the coronavirus on Turkey's economy is freight prices.

Failure to load and unload at Chinese ports caused problems in container traffic across the world, such as difficulties in finding empty containers for exports, said Izmir Taner İzmirlioğlu, a board member of International Transport and Logistics Service Providers Association (UTİKAD) and the Chamber of Shipping.

"Ship owners started to increase freight as they had to bring empty containers. One of the well-known major ship-owner companies announced that they will increase the price for some $100 to $200 depending on the container capacity. This will increase our export cost by 5 to 25% depending on destination," he said.